Just finnished working on radio, and, 45 changer in this beuty. Need to find a motor for the 2 speed changer, as the old one is shorted.
This unit had been worked on as recently as 1968 by original owner, then, Mr. Detrola put some parts in the tv to get it playing again. It needs rebuilding. I rebuilt the am radio in it already.
Tommorrow I'll post picture of it.
This is one of my more fun projects.
Bill Cahill

oH. I have an original rebuilt cartridge in it, and, replaced motor grommets.
Somebody had replaced idler wheel, and, cycling cam in it in the 60's. They are still good. I lubed, and, adjusted changer.
It will play up to 15 records in a stack.

Is that one of those 2 speed on the left 45 on the right radio in the middle ones?

Nope. Ith has a 16" tv on the left, with speaker under it. On right top slide out drawer with am radio, and, 45 rpm deck on top.
Under that is two speed changer for 33.3 rmp, and, 78 rpm.
That one has a shorted motor, and, bad cartridge.
Underneath that is record storage.

There are 3 doors. One in front of most of tv, one smaller one covering part of tv control panel, and, the third covering everything else. Both doors have grill cloth on bottom, mahoganny, with photo finnish on outside of all 3 doors.
Bill Cahill
_________________
Please also join us here; www.videokarma.org/index.php

And, Now, as prommissed, here are some pictures. Now, remember, technically, this is a tv. However, I'm not yet working on tv. I just finnished work on 45 player, and, radio. The two speed changer is presently out of cabinet for repairs. 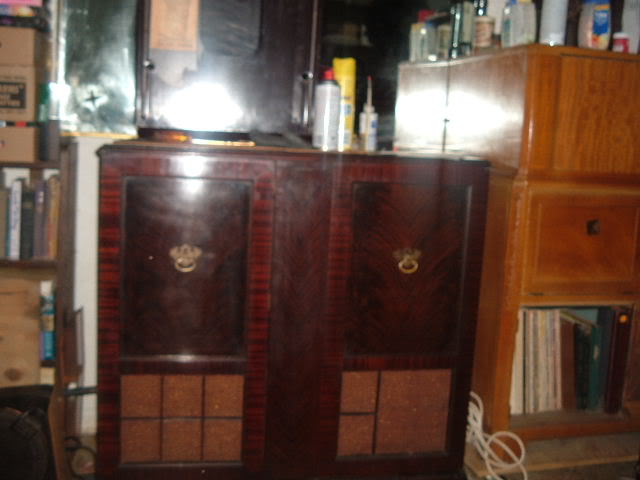 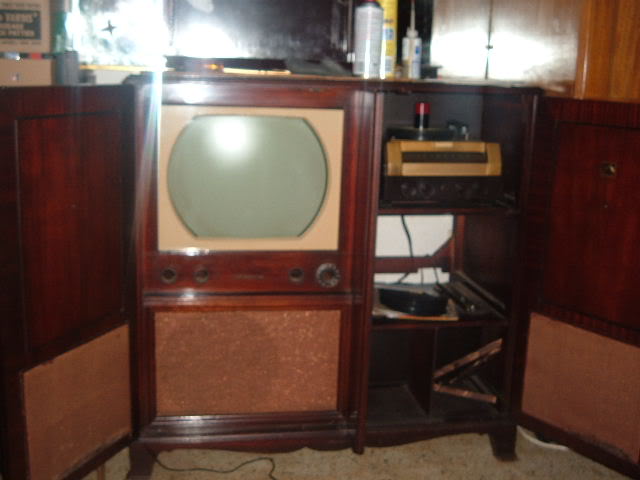 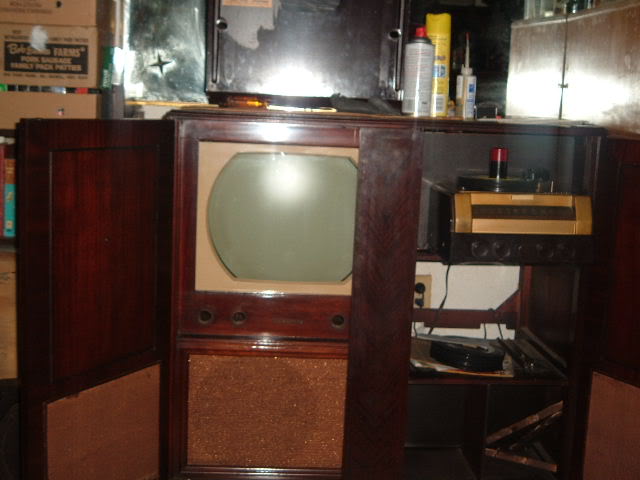 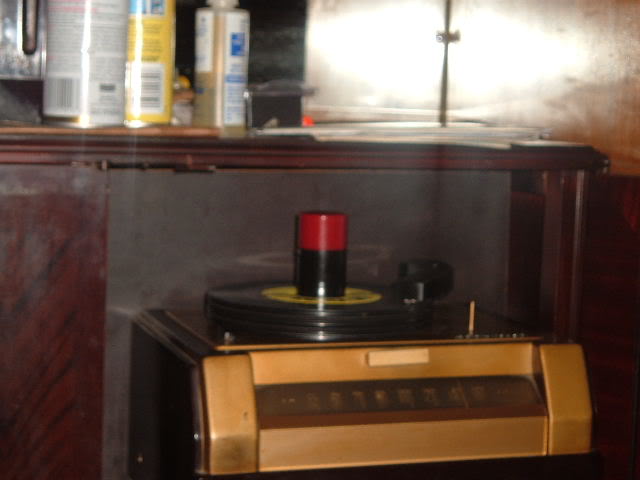 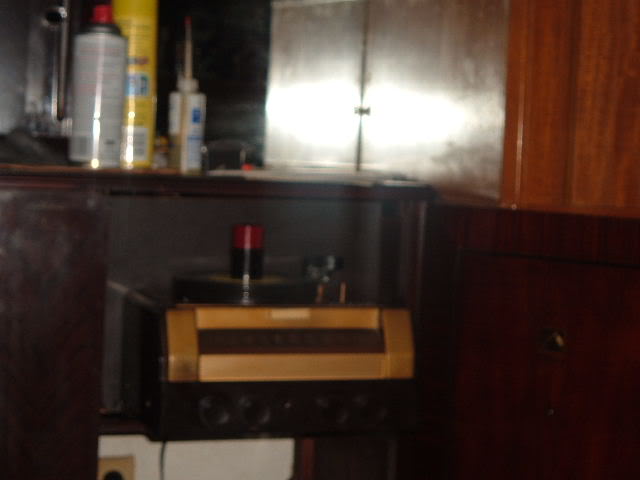 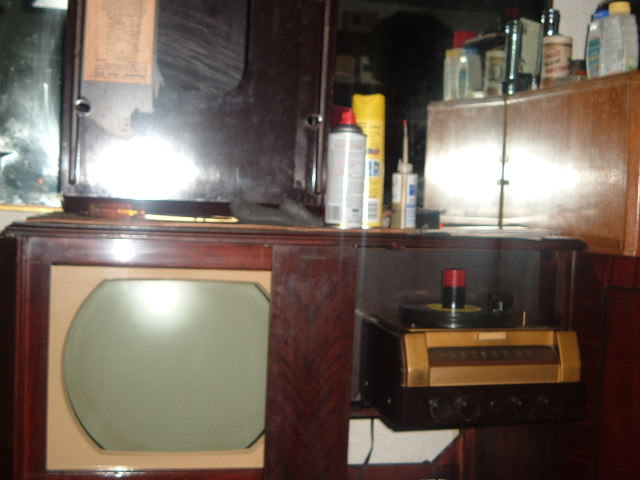 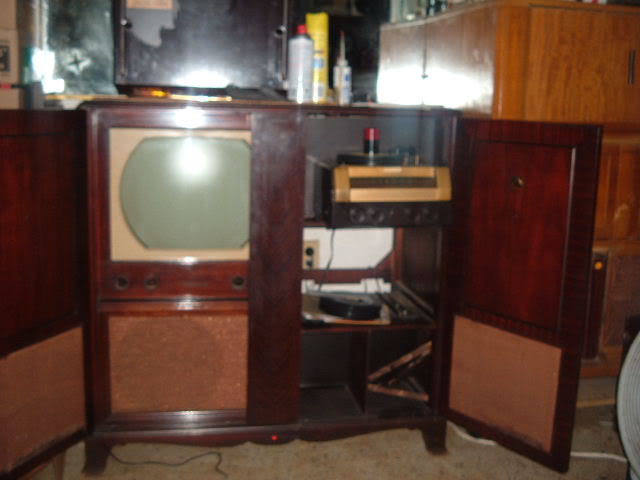 The cabinet has sustained some dammage from moving some years ago. Grill work in front was broken, and, not all pieces are there.
Case was dirty, as was entire piece.
I re capped radio, including electrolytics.
I replaced resistor on dial lights.
I had to replace cartridge on 45 player, as crystal had been broken.
I have a re built Astatic 62-1 orig. style replacement cartridge in it. That one also had a broken crystal.
I had it re built 15 years ago.
Radio plays fairly well. It's AM only.
Mr. Detrola, Dennis, who was the last owner, had recently gotten the tv to play, and, had a fairly good picture, said it still needs re building.
Caps are dynamite ready to blow.
Two speed changer, you can see part of it on floor by cabinet in one picture, has a shorted motor, which overheats quickly, and, a dead cartridge.
While I'd say the cabinet had been well taken care of by original owner, they did as little as they had to. Picture tube had been replaced in early 60's, but, was on its' last legs. I've replaced it.
Mr. Detrola replaced yoke some years back, which he said original caught on fire.
Flyback may have been replaced.
Some of the tubes are original.
The cartridge, cycling cam, and, idler wheel had been replaced in the late 60's by original owner.
Her kids used it for several years after that in their own bed room.
When Dennis picked it up some years back, it was still in that room.
The machine doesn't have great treble, but, has very good bass, and, plays well.
It uses pp 6V6 output tubes. Amplifier drives a 12" 400cycle full range permanent magnet speaker.
Amp in radio chassis is also sound for tv.
Bill Cahill
_________________
Please also join us here; www.videokarma.org/index.php

Bill, that's a nice looking RCA. They made one of these without the two speed changer, with only the 45 changer and AM/FM radio, and the entire left side is for 45rpm record storage. That's the one I'd like to have... then I could get all my 45s out of the top of the closet and organized in a nice cabinet.

I have a soft spot in my head, er, heart for thsee because of the 45 player, and, the similarity to the family tv.
This uses a KCS 48 tv chassis.
I also replaced motor grommets, and, lubed changer.
I also forgot that I have height adjusted so it will play up to a total of 15 records on a stack.
Bill Cahill
_________________
Please also join us here; www.videokarma.org/index.php

What kind of cartridge does the 45 player have? It won't play 15 records unless it is the original crystal cartridge, or one of Bosco's low riders.

The cartridge I used is the original style. Rebuilt.
Actually an 89T mounted just right still might handle 15 records.
I just believe in originality.
I want my sets as much as they were from the factory as I can get them....
Everybody's different.
Bill Cahill

Bill, so you found a crystal cartridge that still works? Amazing.

As I said, I had it rebuilt 15 years ago.
If you take proper care of them, I see no reason they can't last.
Still have an intermittent dial light switch..
Bill Cahill
_________________
Please also join us here; www.videokarma.org/index.php