The impending renovation of my Zenith console model may or may not get done this year; but I read somewhere ib the internet that powering up an antique radio for the first time is best done with a variable power transformer. I have one such animal and would like to know since we can't believe everything we find on the internet if this is true or not. It was described as the difference between a soft and a hard start with the pros being the ability to gradually condition the tube filaments and capacitors.This would seem to make sense to me but since I found no mention of 'Variac' in searching this forum, I'd like to know if there are any cons for not doing so." Thanks in advance. -js

I occasionally use a variable transformer for an initial startup. I did this for a Radiola 28 that uses a ballast tube and an 85 volt transformer. Since there was extensive work on the power pack that has as much as 800 volts at startup. I though the such an initial start up would be a good idea...

For a later model radios like a Zenith the "dim bulb" is a more favored first test.

It is a simple affair with a 60 watt old school filament light bulb in series with the AC line. Excessive current will make the bulb glow brightly. It is a quick test, if the bulb is dim, then full power can be applied to the radio...

If in doubt about the work... Use a VOM and measure the B+ to B_ resistance, looking for at least 7.5 to 12k ohms as the capacitors charge. If the resistance is some 2K to 5K there is a wiring error or a short. If the set has never been powered test the power transformer by removing the rectifier tube and powering the radio. There will not be any high voltage. If the transformer is good it will not overheat after 30 minutes. Immediate cracking and sizzling sounds are a transformer failure... chas

Everything you mentioned is new information to me and I understand f fully having worked with vacuum tubed radios back in the late '50s. I'll keep everything in mind when I get physically involved with this. -js

I just now noticed your profile..

So this is not a new hobby for you? Nor is it for me I started fixing sets 12y.o. for pocket money... I found collecting of discarded sets much fun and I am still collecting on a very small scale...  chas

No, not a new hobby for me, just a revival of what I played with many years ago.  I found many, if not most of my radios at the local Salvation Army thrift store back then. I never paid more then $5 for any console unit there and $2-3 for table top units.  It seems people were cleaning out their attics, starting raising families  and going in new directions.  The mid to late '50s were when the Korean War wound down, at least the visible part of it, and prosperity was returning. I recall getting catalogs in the mail from Lafayette Radio, Allied Radio, and others. and we had a Lafayette store on Main Street in downtown Buffalo.  I don't think Radio Shack  came on the scene until the late '60s - early 70s.

I also recall a  government  surplus store in the Town of Niagara in the early 60's It was packed wall to wall with real military surplus electronics for a while, but this was all greek to me. Nothing was documented, but I liked the beefy military construction  I couldn't identify mich from the byzantine tags so I  purchased only a few things there. There were baskets of  electrolytic power capacitors too.  I still have a couple of these PCB filled beasts in the basement. They never leaded and I expect I'll use them eventually. Thanks for the shout out.  -js

I don't have much experience but i have a variac that i plug a wattmeter into, the variac and wattmeter combo is handy to tell if something is not right on the current side of things. and you don't hit a questionable radio with all 120 volts at once.

There are many ways to start one up. I use one of the sencore powerites that have a isolation transformer and variac built in. I like it that it has the isolation built in as well and I can slowly bring the voltage up. They are buit to last from what I have seen , I am the 3rd owner and have had it almost 30 years. They are pricey but if I find another one I plan on buying it. Well worth the cost.

I always use a variac (with a 1:1 Isolation transformer) on old radio start-ups (after P/S recap, of course).  Same for old audio gear... also for any stuff in my collection that's been unused for years. I also use it after any modification (radios and audio.)  The combined voltage and ammeter readings as you advance the variac can tell you a lot about the unit under test.
Cheers,
Roger

For safety sake, use one especially if your not sure what it might do. I have a Sencore unit that I bought new many years ago that has saved the day more than once. Safety comes first. I don't feel like there are any cons to using one.

Keep in mind that a varic is not isolated from the line voltage. It should be used in conjunction with a 1:1 isolation transformer for safety reasons.

I always use a variable autotransformer and isolation transformer when powering up old tubed electronics for the first time. They are in the same cabinet along with appropriate meters and fuses: 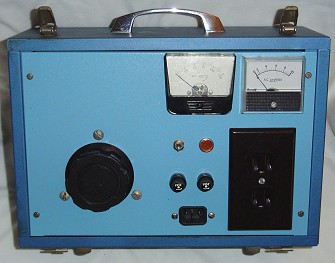 I would only bring up on a variac and dim bulb.  gives you a idea if there is something wrong and helps keeping you safe.  theres many ways to make one, simple to more complex.  This I plug into a variac

is there a size limit?