I just spent a few bucks upgrading my recording studio.  I'm getting set to record, with a real cast, some of my detective stories.  Since I only buy from eBay, Facebook or Craigslist, and by knowing what I'm looking for, I get some really good deals.  Don't worry, photos coming next.  I'm still waiting for a couple of pieces of equipment.

Here are the deals-
My friend in California sent me a nearly new Mackie 16 input board, worth $500, for the shipping-$100.  Sweet.
I picked up two really great Advent speakers for monitors.  I'm pretty sure these were made when they were using Jensen components, 'cause they sound great.  Those and two telescoping stands, $50.
I purchased another CD player on eBay.  I didn't even notice until later that it was the exact same model as the one I already have.  What are the odds?

With all this good equipment I figured it was time to get a decent amp.  I wound up with a Jobsite model 45-X2.  It was $75 on eBay, and it came today.  First, I saw that the board holding the speaker terminals had been pushed back into the set.  That did not bode well. The output relay, right behind the terminal board, was not seated properly.  My first thought was that the speaker terminals had popped it off the board.  The truth was stranger.  Of course, when everything was hooked up, there was no right channel.  After sending a terse message to the seller, I popped it apart.  When I finally flipped over the circuit board, what I saw amazed me.  The right channel had never worked on this amplifier.  It couldn't have.  It came defective from the factory.  The two terminals on the relay for the right channel weren't sticking through the board, and the holes had never been soldered.  The right channel had never been hooked up.  I reset the relay, soldered it in place, and now everything works fine. Time to audition a cast.

I set up a recording studio once in a church. I got a Mackie mixing board and really liked it. It will be a really nice one if it is as good as the one I had got. It worked really smooth and nice. 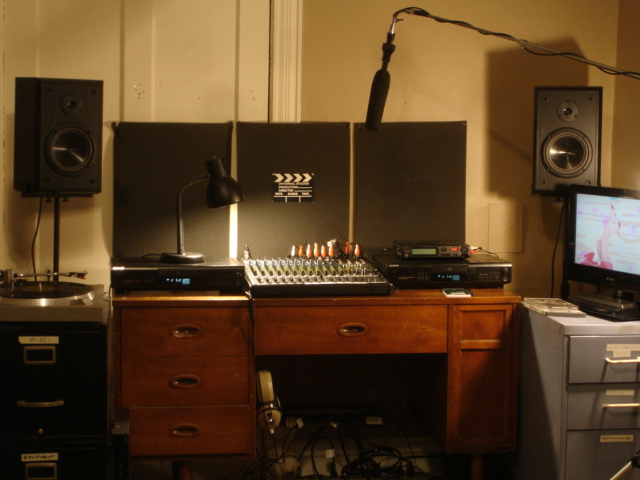 I spent a little more money replacing my Advents with Infinity SS2002's. (Shown in the photo.) The Advent's have very little bass response, and the Infinities have lots. The surround foam was just replaced. The seller told me that as time goes on the new foam will start to relax, making the bass even better. Cool beans.