Hello everyone, about 2 months ago or so I bought from the Goodwill I work at a 1979 vintage Zenith AM/FM Stereo Clock Radio with PowerReserve® (which from my understanding most of Zenith's electronic alarm clock radios from the 1970s and early to mid 1980s had that feature), anyways I've also had a few other old Zenith clock radios in the past that were from the same time period that also had the PowerReserve® feature, and anyways every Zenith clock radio I've had that had the PowerReserve® feature had a non-functioning PowerReserve® feature, and I've always wondered why that was. Basically the PowerReserve® feature was an early attempt at a battery back-up system for a clock radio during a time period when many clock radios didn't have battery back-up for when you lost power, so you didn't have to reset your clock when you got power back.
The system consists of a circuit board with a switching coil-pack and several transistors and a hardwired Ni-Cd rechargeable battery of the "AA" size persuasion that is soldered to the board. I had always thought that maybe the battery was the culprit in why the PowerReserve® system on these old Zenith clock radios quit working, but now I'm not so sure because after having had about 6 of these go through my hands over the years and all of them having the same isssue of a malfunctioning PowerReserve® System I'm thinking that possibly either the switching coil-pack went open some how or one of the transistors popped some how, either way it seems whatever it was that caused these battery back-up systems on these old Zeniths to fail was a fairly common failure for them either because of faulty parts or because of a bad design, either way I wonder if one of these could be brought back to life so that it could function again like its supposed to, and if so where should I start?
Any help would be appreciated on this matter. A picture of the clock radio in question is below. 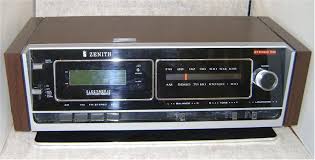 NiCad batteries were among the first rechargeable batteries available, to my recollection. They have one key problem... battery memory, which means that if they are not fully discharged and recharged on a regular basis, the charge coming from the battery eventually drops and the battery acts as if it can no longer hold a charge.

I have a similar circuit in a pinball machine I own from 1982. When I started investigating what I could do about that circuit in the pinball machine my first thought was to replace the NiCad with a more current technology, such as Lithium Ion. I found, however, that the circuit was specifically designed for NiCad batteries so replacing them with anything else wouldn't work.

Anyway, the way I eventually got the circuit restored was to put a new NiCad in the circuit and replace a few of the more common transistors.

Alright, Thanks Greg, I'll give that a try.