Even though I've been collecting radios forever, I still do not have a single cathedral radio. I've always liked the styling on these Philco Deco sets, like this 89A. But they seem to be commanding high prices these days. This one has been rebuilt, all the caps replaced with orange drops, and all the tubes checked. So electronically the set is in great condition. But it has a pretty serious cosmetic flaw, and that is that one side of the set has what looks like water damage and the veneer is coming off and is wavy.

The price was right and the front looks decent. For $20 I figured surely there must be some way to repair the veneer. But I've never done anything like that. I remember I attempted something like this years ago. I took the crappy old veneer off, soaked it in warm water, put glue on the backing and re-pasted it on. The results were barely acceptable. What do you all think the chance of me being able to find some sort of new veneer, match the stain/color, and blend in the repair? Since its on the side, it won't be as noticeable. 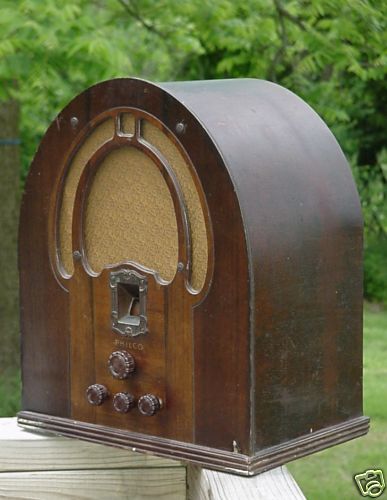 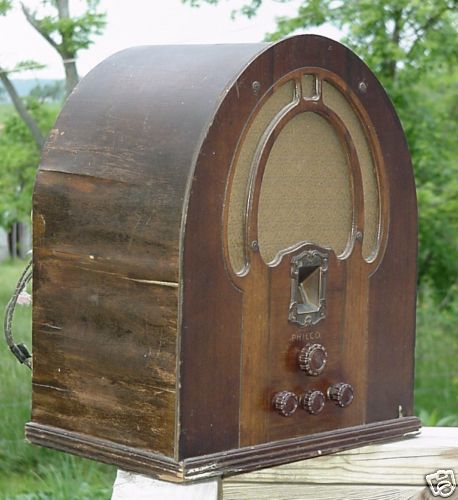 Anyhow, I never expect this radio to be a "trailer queen". I just like the way it looks. Half the radios I have are kind of like this: cheap, and imperfect. So I'm looking for some pointers if sone of you have some expertise in veneers.

The easiest way to do it is with the paper backed 'flexible' veneer all in one piece. No more complicated than putting down shelf paper

Well, almost. You can get the flex veneer at any number of vendors. I usually go with Constantines or Rockler. Then you just treat it like any other wood project. The front panel looks salvageable there.

What you need to check out is to see if the substrate underneath the veneer on that one side is in acceptable condition. If not, it will need to be reglued or replaced. You can get the thin wood at some hobby shops or, if you need mail order, National Balsa has a good selection.

Wow,
that sounds like a great idea. So is this paper backed stuff made out of real wood? According to the seller, the substrate is in good condition. I'll look around for that stuff. Thanks!

Nice find Bob, 20 bucks is a steal! I just attempted my first real veneer job and it wasn't too bad . I got it from:
http://www.rockler.com/product.cfm?page=2216&TabSelect=Details
I know another guy who swears by using contact paper covered with some lacquer. I've never tried it, but have seen it and there is no way you'd ever be able to tell that it wasn't veneer. http://www.berlinwallpaper.com/dcfix/Woodgrain.htm
I've seen it done to replace photo finish too.

Haha, the contact paper. I have a 37-60 that came with the arch covered with it. Its not the really cheap stuff, in fact its quite convincing (relatively) from more than a couple of feet away. I don't recommend it, however.

Here's the link to Constantines' page of flex veneer.
http://www.constantines.com/index.asp?PageAction=VIEWCATS&Category=171

I looked at that flex veneer. The stuff ain't cheap, that's for sure. Its like $40 for a piece of Mahogany. I wonder if I can cheat and get a cheaper wood-like maple or cherry and stain it to match the rest. You figure most people don't look at the sides very closely.

Ya, I thought $20 was a pretty good deal. Shipping is $35 though, so that sours the deal a tad. But its already rebuilt, so that saves a lot of time for me.

Yeah, the new veneers are supposed to be very easy to work with, but if you're doing a patch be aware that it is pretty thin and might not match up thickness wise to the original, older veneer.

Over the years I've harvested veneer from abandoned consoles and such so I have a pretty good supply of vintage veneer for patching. If I was going to replace a whole section like the complete arch on a cathedral I'd be tempted to try some of the new veneers and glues. It's pretty interesting what is available on some of those woodworking sites.

bobwilson1977 wrote:I looked at that flex veneer. The stuff ain't cheap, that's for sure. Its like $40 for a piece of Mahogany. I wonder if I can cheat and get a cheaper wood-like maple or cherry and stain it to match the rest. You figure most people don't look at the sides very closely.

Yabbut, thats a LARGE piece. You'll have enough for other projects.

You know, just to do an arch I wouldn't hesitate to use the thin birch plywood. You will stain/tone it pretty dark anyway and its pretty nice stuff.

To give you an idea what the birch looks like here's a piece of it.

The thin ply like 1/64 or 1/32 is easily bendable for the arch. You can cut it with scissors or an x-acto knife. Handy stuff.

It will not stain very dark. You'll have to use toned lacquer on it.

I reckon I'm going to bite the bullet and go with the mahogany veneer. I figure this is the only cathedral I have. Might as well do a good job on it. I think the front will clean up nicely with some Howards. I'll post pictures of the process when I get the radio ( which is being shipped to me as we speak) and when I get the veneer.

I'd love to see some pics of the process. I did my first veneer replacement last month. I'll pray for you.

Actually I found that when I replaced the veneer on the sides and top, although I tried to match it with the front, it just didn't look the same. I wound up stripping the front as well, using the same stain and toner and then it looked fine. Perhaps someone with more experience will chime in and point out my error. I'm kind of a perfectionist and with the rest of the radio now looking "too good," the front really stood out as needing to be refinished. It just made the new veneer obvious. (to me, at least)

You glad u got it its a coll Philco

I've got two cathedrals in similar, if not worse, state than this. How do you get the old veneer off without damaging the substrate?

Where did I put that...
Member