I went "picking" this weekend. A fellow contacted me about some tubes in a caddy.  He said he had two tube caddies and some parts in a shed. I went to look at the stuff and saw the usual caddies. One was a generic caddy and the other was a RCA. They were filled with new tubes but if I was lucky I would have got the usual 10 to 15 tubes  I could use. When I see a average tube caddy I  think at the most it has a value of 25 bucks due to this. Anyway I went out to the shed and there were about 6 to 8 cabinets with drawers filled with parts. Due to mice. mold and dampness a lot of the parts were lost. But I did see a dial for a 20s victor I needed and decent size box full of knobs. I also got a lot of different types of hardware like screws ,record parts and other hardware. Sad thing is a lot of nice stuff was damaged due to being stored where mice and dampness  could take its toil. We did make a deal on the parts which is what I really wanted and he didn't want to part with the tubes at my offer.

One of the biggest issues I have with "picking" is with the sellers. I get tired of them never telling you what they expect and then when you offer they say there is no way.  Most of them have no idea, they just think its valuable. This guy was a nice older fellow. He bought it from a shop that closed back in the late 60s/early 70s and he thought he would open one some day. I explained to him that there were more TV tubes out there than the need. I do understand he probably has a lot in them but then again he left the real value to me the parts out in a open shed to go to waste. I did give what I feel like was a fair price  to both of us for the items I got . I think I probably paid too much and he probably thinks I paid to little. Anyway what is it with folks they have a offer in hand and will rather let it go to waste than let it go. Its like this old stereo I was contacted about a while back . They had probably 10 to 20 bucks of records and a 25 buck stereo. They want 100 bucks for it all as "some of the records are worth 10 bucks or more". I passed quickly. Last time I looked they had posted a ad to sell it for 100. I think when the 70s particle board stereos get to be valuable I am going to quit collecting.

Anyway I think it was a decent pick that I paid a fair price. But I see folks all the time posting stuff they get for 20,30 40 or even 100 and they bring home a truck or moving van full. I wonder if it has to do with location or something. Anyway I can't fault the fellow but I won't pay more than 25 bucks for a tube caddy filled with TV tubes. Especially when the last one I got at a radio meets auction had no one bidding at 7 bucks and I bid on it and got it.

Bill Cahill wrote:Congrats. I wish I was that lucky. That type of thing never comes up here...

I have put an ad on a craigslist site and almost never get anything. Over the last few years I have maybe made 4 or 5 deals. Most of the time they want a minimum of hundreds of bucks for a caddy. I think it was one of the break even kind of deals but I got a dial for my victor so it was worth it. Biggest two issues is they won't tell you what they want up front then ask a kings ransom and the second issue is trying to get a reply back in any form after you let them know your interested. But sometimes you do get some items. Last really good find I had was in the early 90s. An older man called me and wanted to clean out his basement. He quit working on radios due to his heart and I got a lot of junk chassis. Thats where I got my fada bullet. One of the biggest overpriced ones I saw was a elderly woman who wanted to sell the stuff left over from her husbands shop. HE had priced each part his sales price and she wanted that. I tried to explain it to her that I could buy the transistor he had at 10 bucks marked from MCM for 59 cents. She had maybe 500 bucks at that time worth of stuff and I think she expected 10 grand or more. I bet its all at the landfill now.

I'd like to dig thru a pile of stuff. I don't come across it much anymore.

I though I would post some pictures. I got really lucky in some ways as I got a lot of stuff I didn't have. I gave away a lot of stuff through the years as I got full in my workshops. I let go of a truckload of radios,record player parts,etc when I built my house. Anyway I had no parts for record players. I got a lot of the little hardwate,screws and some cartridges. Most if not all cartridges are probably bad. I plan if the cartrdges are bad to rebuild them like in youtube videos.

I also got some cap mounting hardware. Most of the time I had to do without or go look in the junkpile then strip off the parts I needed. I got a lot of boxes as I wanted to setup a display. Anyway here are some pics.

Radiopup AKA Julie and Marty has a Sylvania tube holder like this filled with boxes. I liked theirs so when I saw one at the radio meet I asked the guy about it. He made a geat deal on it and a GC tray, and a RCA sign if I got them all so I did. Most of these boxes are empty or the parts are bad. The caps in the boxes have leaked out oil. 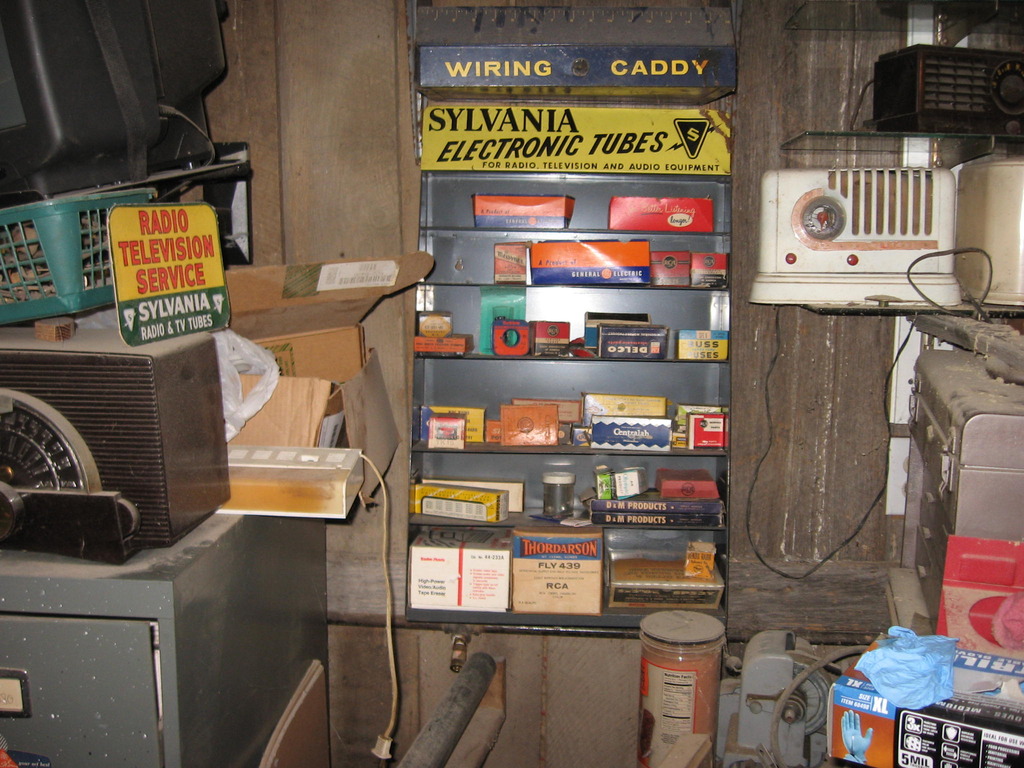 This is one of the piles I think well worth getting. There were new dial glass and pointers. I am always needing pointers and glass. I think I can use all the glass right now as I have a few with broke dial glass. Back in the 80s I got every radio I found. The were cheap and lots of them were free. I stored them in the barn at my parents house then brought them to mine after I built my workshop. So I need lots of parts. 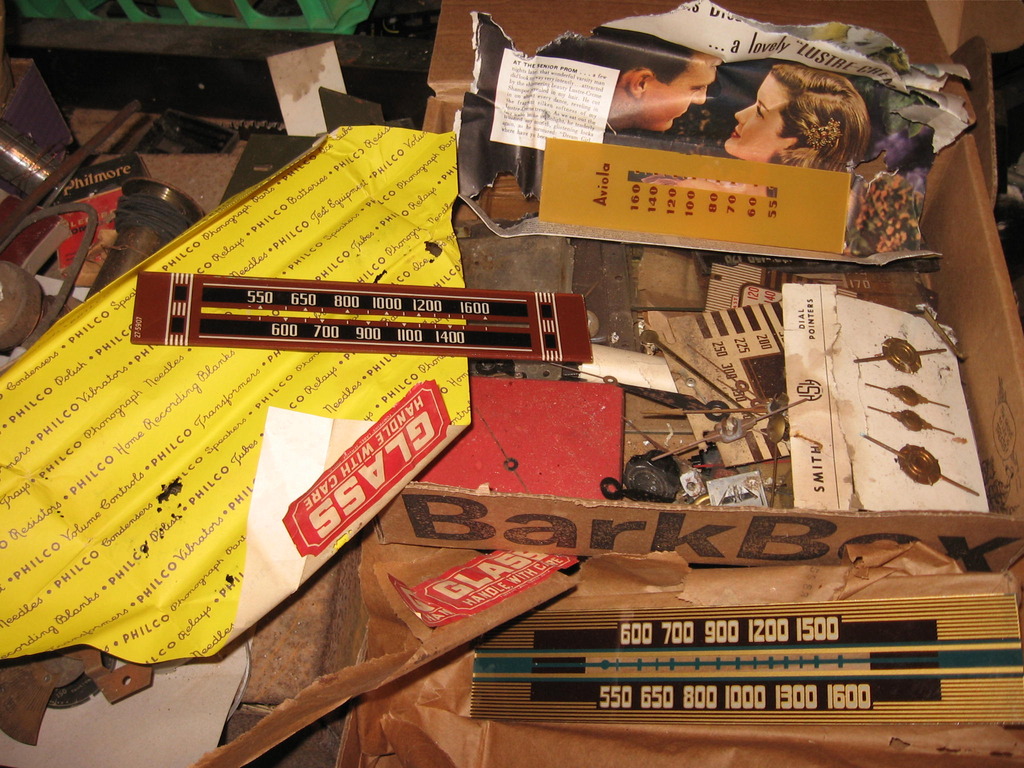 These are the transformers I sorted. They were in a refrigerator drawer and I thought there were more. But  I sorted them out and the bottom of the tray was full of rusted nails. But I did get a few speaker output transformers I am always looking for. 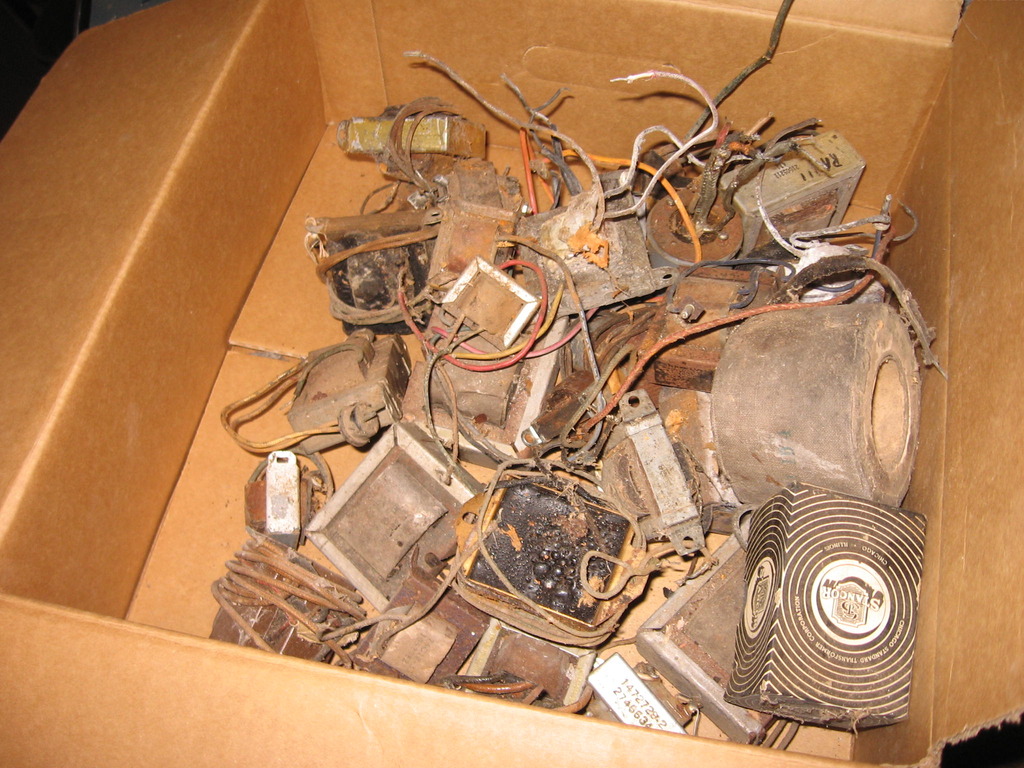 Here is some other dial faces. I think these may be auto dial faces.  I got really lucky as I got a couple of knobs for a 30s to 40s underdash radio. I picked up a 30s/40s radio radio years ago I always wanted to restore but didn't have knobs for. I do now. The box full of parts is full of loose parts. There is a black Cap in the upper left. Can you use these caps Bill? 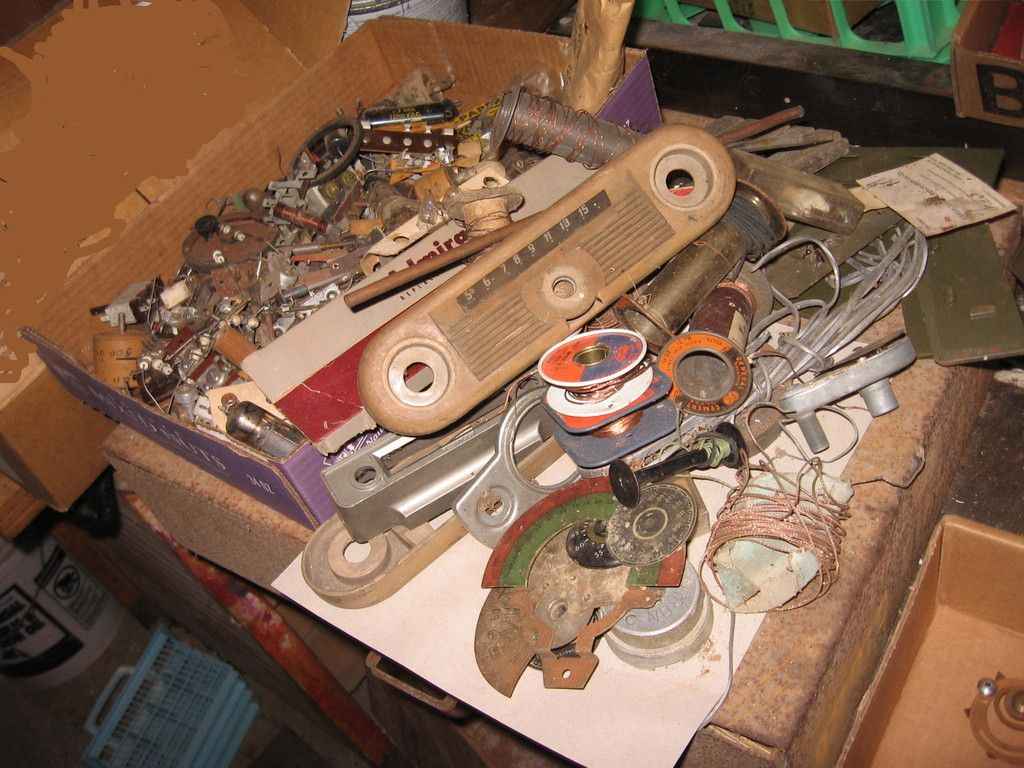 Here is some record cartridges. Most of them have corrosion from dampness so I don't have high hopes. But they do have a lot of the mounting hardware of which I have very little of. I got a few more but I brought them into the house workshop so I could see if they would fit my little RCA 45 that plugs into a radio. 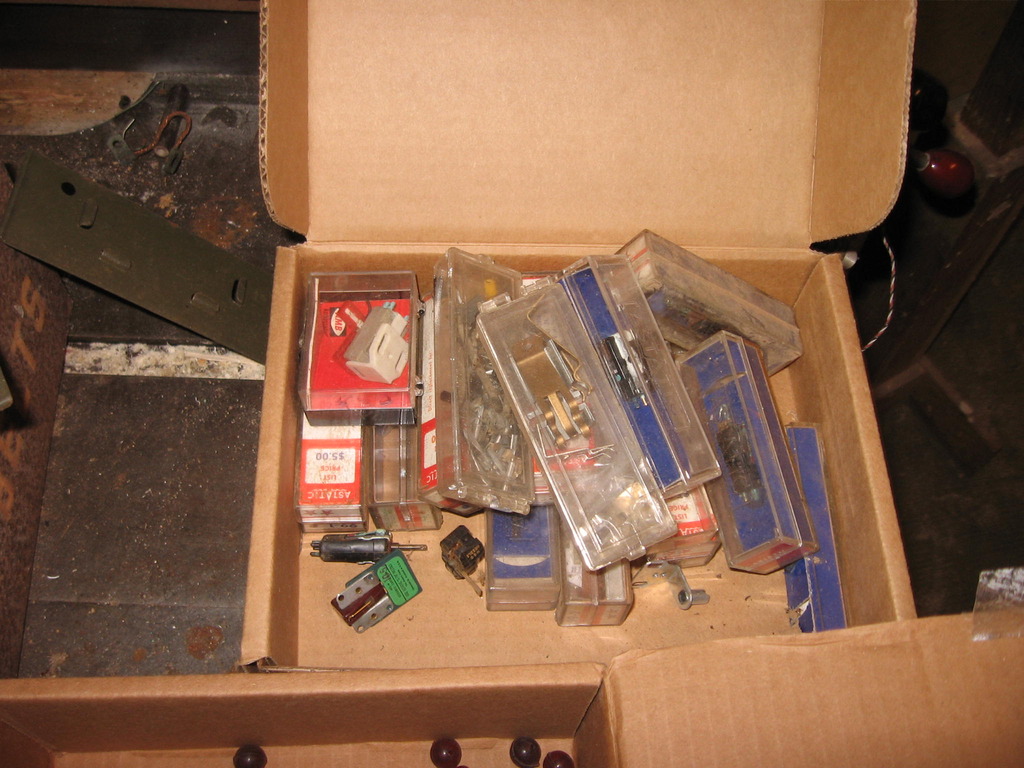 Boxes and more of parts. There were quite a few new IF transformers I can use, if good. 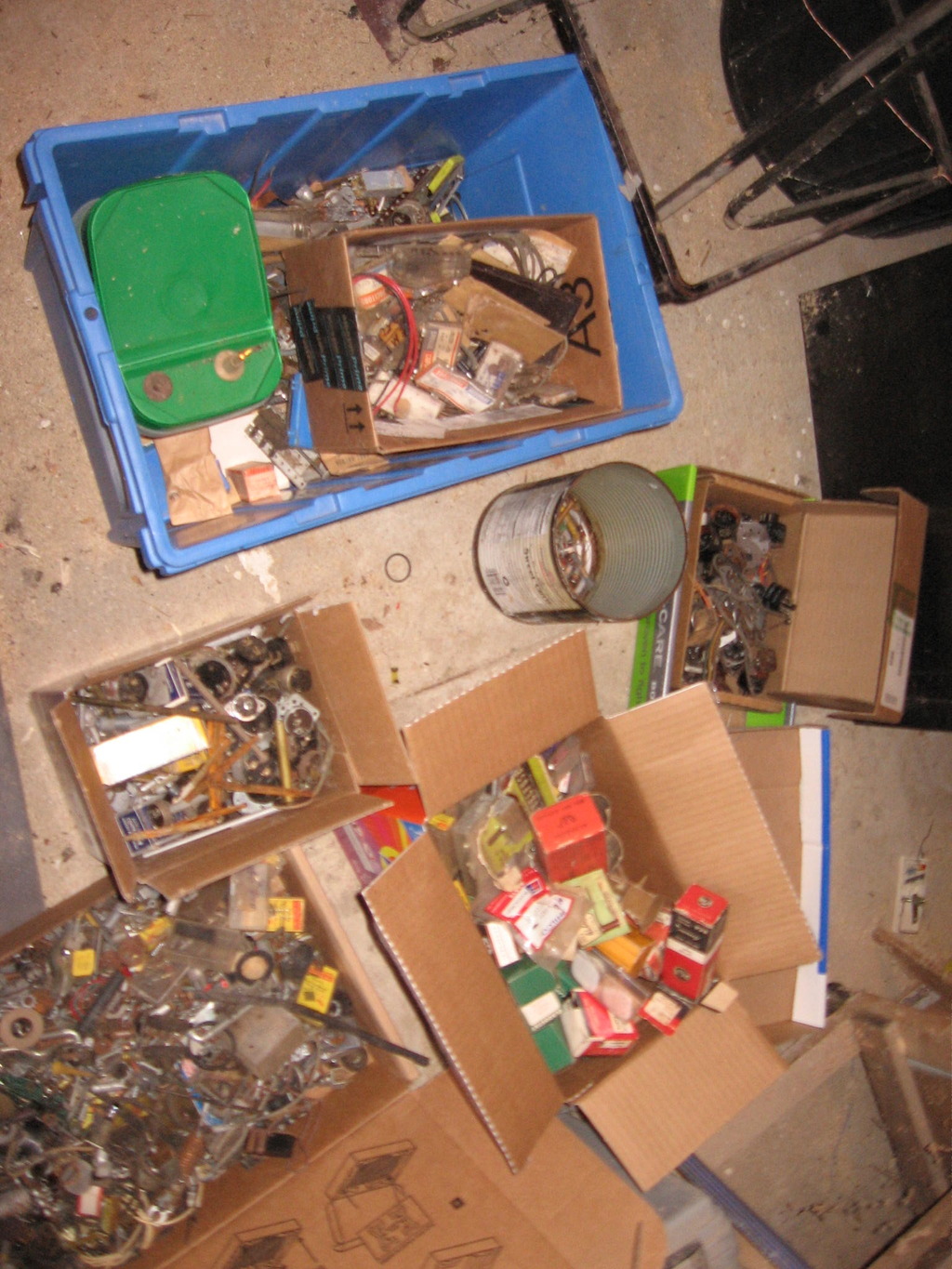 More boxes. The one on the upper left is full of mostly new volume controls. There is lots of shafts as well I need from time to time. 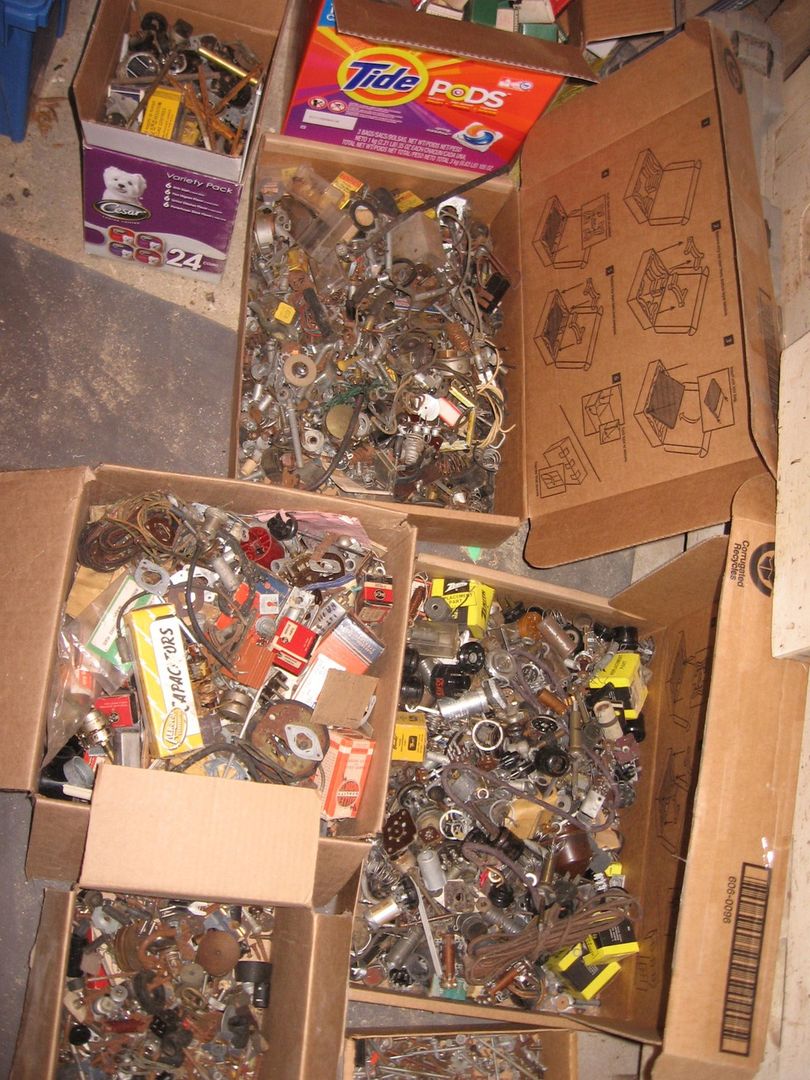 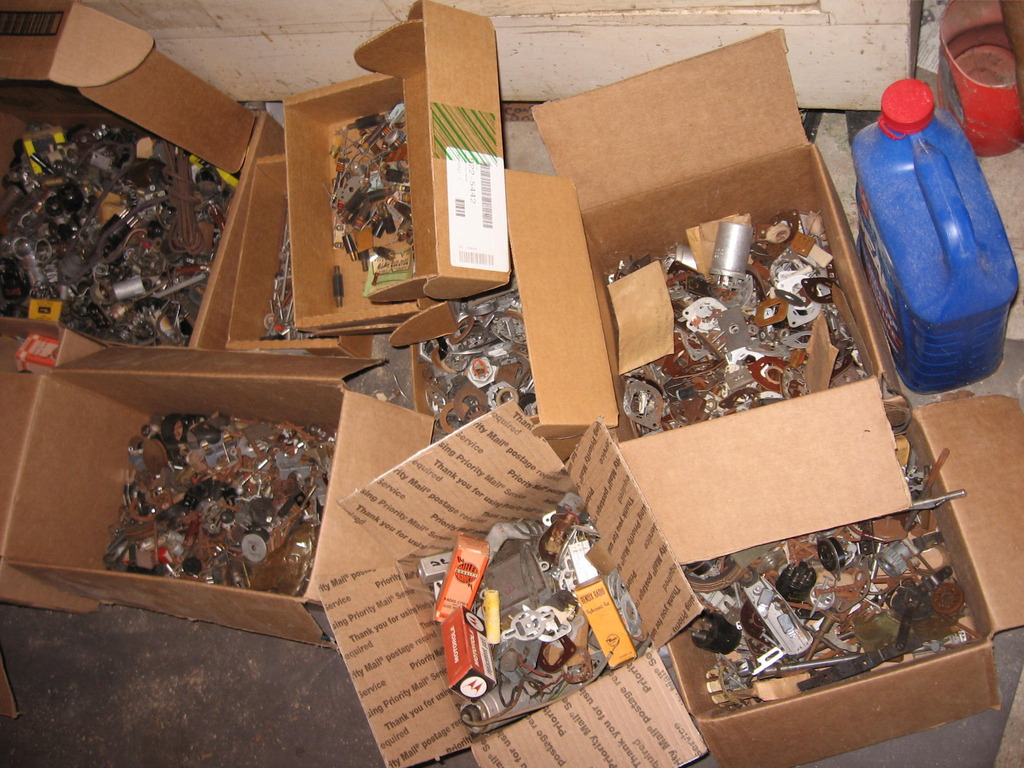 Here are some neat items. These are Sylvania Tokens they would give out. I love to find stuff like this and display it. I also got a couple of Tube straighteners and also one of the straighteners for the small tube sockets. 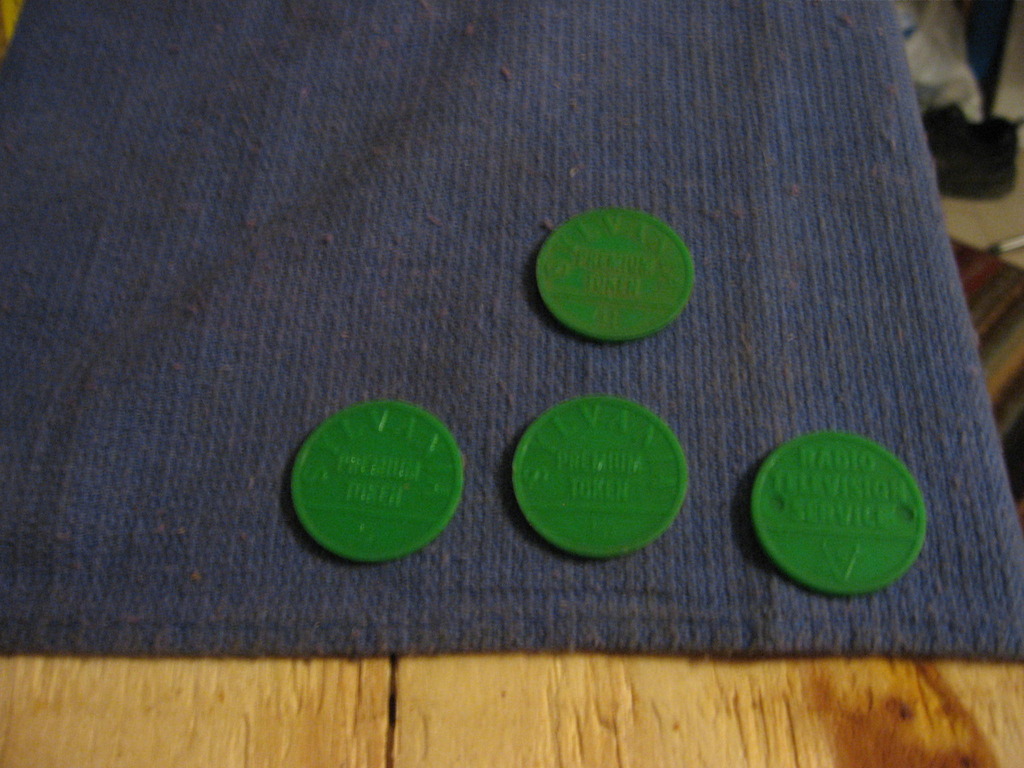 Here is the box of knobs I have sorted. I have about 20 more knobs not in the photo. I found some of them after this photo and some I had already cleaned. I cleaned them in a ultrasonic cleaner I got at HF. Works pretty decent. 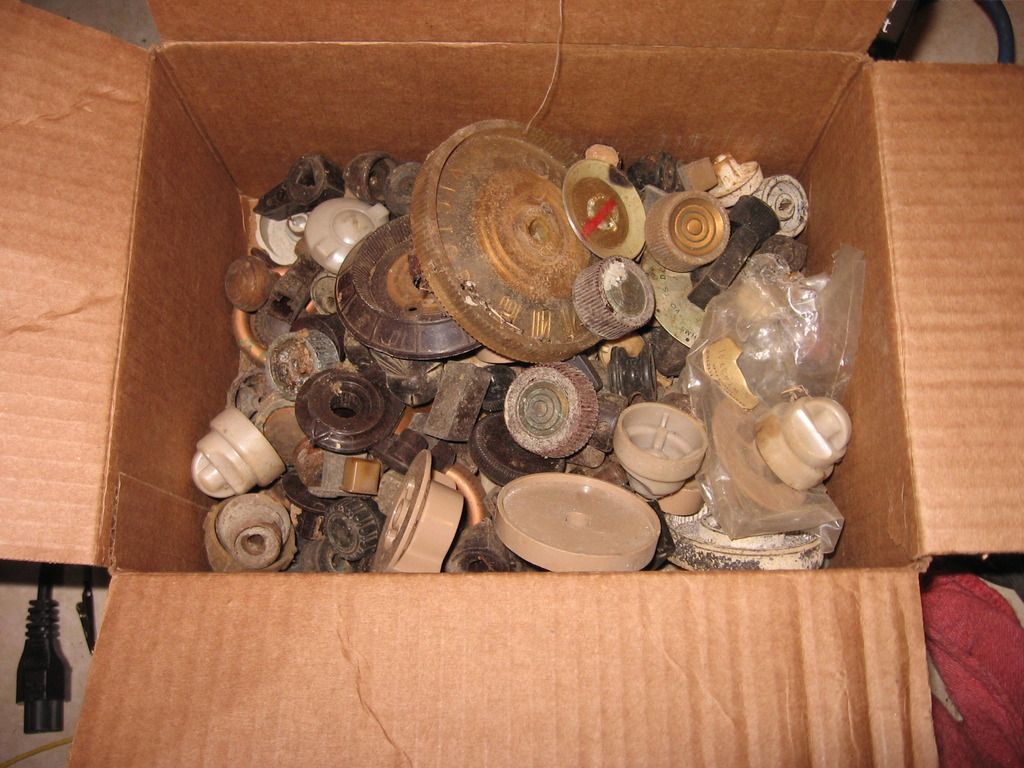 Here is another treat if you will. At the Nashville meets one of the guys who sells stuff had bought these letters years ago at a antique store. He picked through the letters until he had enough to spell antique radios. He got them and they were letters used by a traveling circus. They would string them up at the circus. He never did anything with them and brought them to the meet. He put them in the auction and no one bid on them so I did so he wouldn't have to drag them home. I picked up a cheap board and made rails they fit in to hold them. There are 3 or 4 who put on the show, and this fellow is always really nice to me so I try to buy from them at each meet. 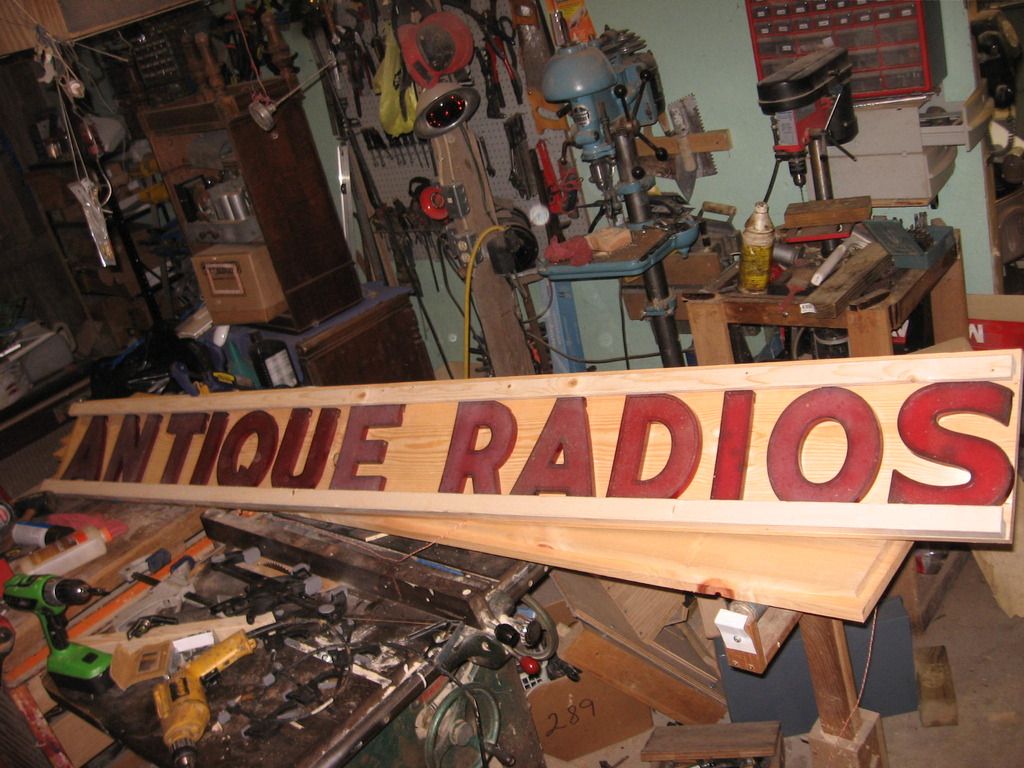 Well thats parts I got after the first sort. I had to get all the filth and dirt out of the parts. I found a really quick,easy and fast way to do it. What I did was to get a box about 14x18 by 4 inches high. I put that box into a box that a dell computer came in. I then angled the box away from me. I took my shop vac and put the hose on the side that blows the air out. I then would blow into the box of parts with the hose in one hand and then mix the parts with the other. The dirt and trash would fly out of the boxes. The reason for two boxes was he helped to keep the dirt from going towards me so bad and also any parts that it did blow up would usually fall into the computer box. I could sort parts out in a couple of minutes that was taking 15 to 20 by hand. A great way to sort but use a mask as I did.

I did have to pick a lot of trash out of it. The guy saved a lot of parts envelopes that had no parts. I had to toss a lot of wax or oil caps that had went bad. There was also trash mice brought in and small paper pieces they had chewed. Next I will go through and pick out each individual piece to put in my own parts drawers.  The only caps I will probably keep is the bad ones that leaked which had boxes in them. I will use them in a display. Bill let me know if you can use those black ones. There may be orange ones as well. There were lots of sprague parts containers but he had put other parts in many of them.