I went to mow today and the Lawn Boy wouldn't start, so I primed it a few more times and it tried to start but then died. So I left it sit an hour or two while the battery charged (I finally killed the 7 AH battery) and then triedit again, and it wouldn't start. So I removed the breather to see if I could tell if it was getting fuel, and it was slightly flooded. So then I pulled the plug and it was pretty much toasted and covered in soot. It is a CJ14, and the only other plug I had on hand was an almost new J19LM out of a Briggs engine. I popped it in the Lawn Boy and it fired right up, running at a much faster idle than it ever had(I wonder why.. lol). So I looked at a heat range chart online and both are in the hot range. So that leads me to my ultimate question- Will the J19LM be an OK replacement until I can get a CJ14? I don't want it to damage the piston. I believe I have it gapped at .035 or close to it and the CJ14 is gapped at .025, however I don't know if that is the right gap or not.

What out you don't burn a hole in the piston!

That is what I was meaning by damaging the piston. Apparently they do not interchange, I just hope it will be OK for about an hour or so tomorrow so I can finish mowing. My Briggs engine is on a broke down deck so it can't be used, and I tried to pull the engine but I don't want to snap the engine bolts.

I just hope it will be OK for about an hour or so tomorrow so I can finish mowing.

I'd be surprised if it lasts that long under load. Go to Lowes and get the right plug.

I just wonder if I would be better off using a CJ8Y(I think)? That is in my trimmer that had the worn out trimmer head. I would get a plug from WalMart, but I don't have the money or a way there until Monday.

Went to WalMart to see about getting a CJ14 and of course they didn't have it. So I got a CJ8 which is closer than the J19LM until I get to AutoZone to get the correct one. I used the J19LM about 10 minutes and then left it sit in the mower until today. When I pulled the plug out it looks like it has oil on it, except its black like old oil. It just makes me wonder if that engine has blow-by or shot piston rings? Is blow-by even possible on a 2-cycle engine? I'm just hoping once I get a new CJ14 it will keep running because I'd really like to get new back tires for it next season to use the drive feature.

It'll be best to check it's condition after running the right plug for a bit. Don't forget Walmart.com, they will deliver to your door, as will Amazon.

That is what I figured and will be awhile. I did also check the compression with my finger and it seemed sufficent since I don't know how it should exactly be. I know all about those sites but it will just be easiest to get to autozone. I could also get the plug or a couple different ones that interchange on eBay but they are more expensive.

I went and finally got a CJ14 for the mower. Mower ran normally and I ran it about 45 minutes to an hour mowing Sunday evening. Then left it sit all day Monday and then was just curious how the plug was looking and pulled it out a little while ago and it's full of soot and smells like fuel. I think the end of the mowers life is coming very soon. 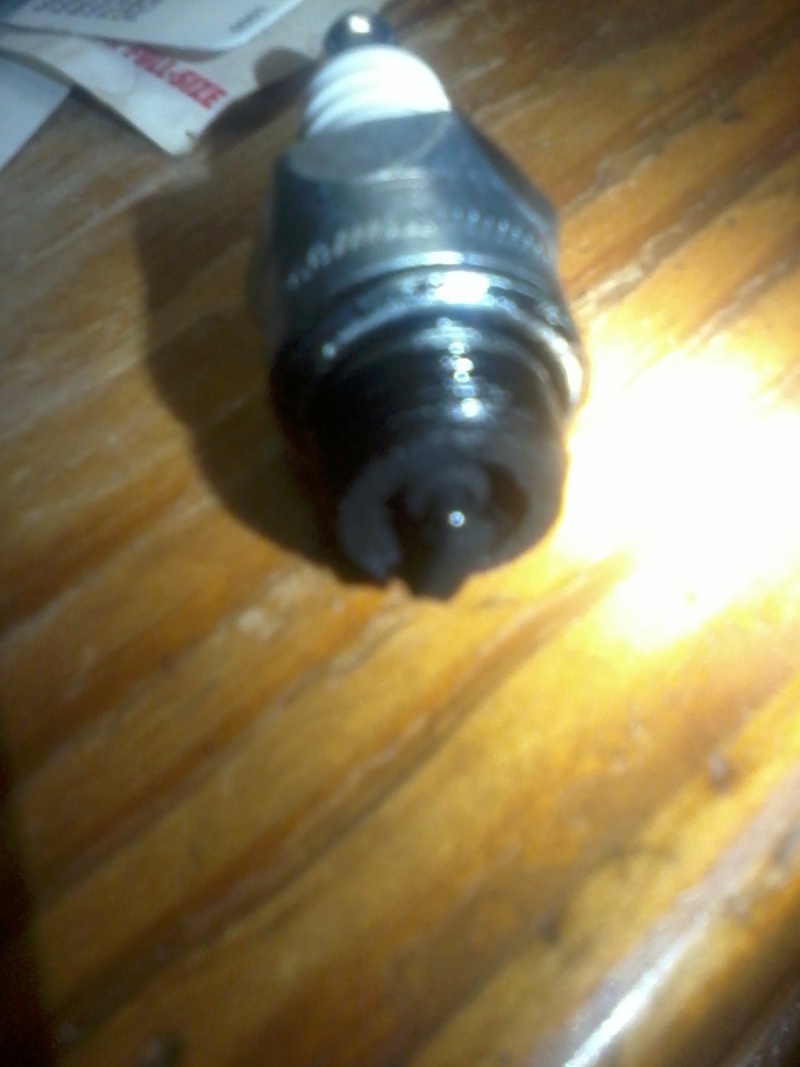 What oil/gas ratio are you using? Can you post a picture of the motor?

What mix ratio is your oil spec'd for?

I buy universal mix and then mix it accordingly with the gasoline. I usually buy the Briggs & Stratton brand from WalMart.

There are several things that will cause that sooty, oily spark plug. They include :

However, the most common cause of plug fouling in older lawnboy motors, using modern oils, is too rich of a fuel/oil ratio.  In the years that your mower was made, Lawnboy oil had a viscosity and additives that were designed to be mixed at 32:1. The manual likely says something like "mix fuel at 32:1 USING LAWNBOY OIL". In later years, Lawnboy went to 50:1 oil (which was more the standard by then) and they amended their manual to say so. Lawnboy (as well as Stihl) oil was bottled by Castrol, and Castrol oil also changed during those years from 32:1 a to 50:1.

There is no such thing as a "universal oil" that has a viscosity and additives that will allow multiple dilution  rates and still meet the engine manufacturers spec's. My advice is to get rid of your 32:1 fuel (burn it in the car), mix up a fresh batch of properly diluted fuel (NOT 32:1) with a brand name oil, drain the fuel from the mower and run the new fuel.

NOTE ::
- often disregarded is the side effect of running a "too rich" fuel/oil mixture. That side effect is the leaning out of the fuel/air mixture by replacing gas with oil. It isn't a big deal in a large slow turning, well cooled engine like the lawnboy, but in a small, high speed, often poorly cooled engine such as in a chainsaw or trimmer, that slight leaning of the fuel air mixture from having too much oil can destroy the motor.....I know, it sounds counter intuitive, but it is a real issue, especially for those who run their machines hard.

Gee can remember Dad asking for Champion J8's at the hardware store for Briggs&Stratton engines.

It just looks like I will be seeking out better quality oil for my mower for the next time I mow.
I had no clue what a CJ8 was for, I was just hoping it was a better subsitute for a CJ14 than the J19 was. As I know the 19's are the best plug for any 4-stroke Briggs engine.