The neighbor brought this over to me this afternoon.  She found this in the attic of her grandfather's house awhile back and brought it over to me to have a look at.  I almost bought one of these in an antique store once, but passed.  This little thing is cute as it can be, but it sure is different electronically.

The service information is in Riders 15, pages 1 thru 4.  This is a four tube TRF clock radio, circa 1950, give or take a couple years.  The original schematic is dated 6-46, but this radio has a 35W4 rectifier in place of the 35Z5 listed on the schematic.  There is a "correction" listed in Riders 19, and this correction states that 35W4 tubes are being substituted in "current production jobs" to alleviate a shortage of 35Z5's.  So this radio is later than 1946 for sure evidenced by its 35W4 rectifier.  The good news about this little radio is that it does not suffer from SMD (no If cans) and I do not have to worry about the oscillator not running (it does not have one).  This thing has a guillotine tuner capacitor arrangement, driven by a dial cord!  A very specific length dial cord no less.  Failure to replace this dial cord with one exactly the correct length could result in erroneous tracking and difficulty in alignment.  This little set kinda sorta works, but the filter cap is almost dead shorted, so I can't get it up to full power.  My stepdad referred to these little radios as "punchboard radios."  These things were the cheapest radio that GE made in its time.  A lot of them were given away as prizes by stores and contests.  The chassis is smaller on this than on my Arvin 444A metal set.  I will have to re-stuff the original filter cap can since there is no room under the chassis to mount caps on a terminal strip.  If I can get this little POS to talk, I can fix anything.  Madman Muntz would be proud of this thing.  The fact I found REALLY odd about this TRF set is that it has AVC.  I have never seen a TRF set with AVC.  That was supposed to be an exclusive feature of a superheterodyne circuit, was it not? Another oddity is the tube codes. The three octals are coded 7-39, 188. The seventh week of 1939 by GE? The code was too smudged on the 35W4 to read. This radio was not built in 1939 using that 35W4. The 35W4 is not a hack. It looks factory.

I am taking pictures and will share those later.

Look forward to pictures WC. I can't believe they were making TRF radios in 1950!
Jerry

I'm not going to claim that this is THE latest TRF set made, but it has got to be close to it. There is a version of this chassis that uses all miniature tubes. I may want one of these for my own if this one works out okay.

I take it your neighbor doesn't frequent this forum.

What this information indicates is that the radio I am working on is likely a 1947 model.  And, no, my neighbor does not frequent this forum.  What am I missing? The set on my bench has white knobs.

I didn't know such a clock radio existed! Does yours look like the one I posted?

Yes, exactly.  The knobs on the one I have are white, not red.  I'm nearly positive that the one I saw in an antique store had miniature tubes.  I misread the tube codes.  They are probably more like the 39th week of 1947, GE supplied.  I'm going to reference some of the literature in the link you posted to see when miniature tubes came into use.  I'm also nearly positive that the one in the antique store was marked model 50, and was later than 1947.  I have a radio repair book by Middleton and there is a model 50 used as an example in one of the lessons, with miniature tubes.  That is how I became familiar with this model.  Quite an interesting little set.

One of those links shows the routing of the dial cord.

So does Riders. What a nightmare that would be to replace. There appears to be two slugs in the tuner. One of them is nearly inaccessible. I guess you would let it slide out, restring it, then go from there. Fortunately, this setup is good and works okay. I have never gotten a dial string exact in my life. I can't imagine how I could restring one with critical length successfully. I believe the one in the antique store is still there. I need to go take another look at it.

They started building these in late 1945 I believe as WWII was winding down and soon returning GIs and their families would be "hungry" for much needed new electronics, as in which we all know, nothing new (civilian-wise) for personal enjoyment was available during the war years. This miniaturized wonder would feed the buying craze for the latest technology offered at working persons' pricing.

Parts were still scarce and aluminum was very scarce due to the war and the need for it to be supplied for aircraft building among the many war time efforts. This ruled out using a traditional tuning capacitor, so an old idea was employed--permeability tuning using slugs. It was a bare bones radio (hence TRF), but hey, it was new and fully integrated with a Telechron timer.

As with many GE models, it was manufactured in great numbers for a few years, so it wasn't out of the question to buy one in '47 for example even though the war was long over (from a manufacturing perspective with parts and raw materials availability).

It is a neat piece of history, often over looked by the fact it is a simple, rather plain looking set.

And a challenge to work on.  I totally recapped this thing, saving the filter caps for another time.  The heavy current draw I had was in the clock motor somehow.  I disconnected the "field" on the clock motor and cleared the short so I could continue to troubleshoot.  I have one station that will come in with the radio connected to my long outside antenna.  It is barely loud enough to hear with my ear pressed up to the speaker.  I can hear it better on my signal tracer.  I seem to be okay after the center terminal of the volume control.  I took the clock motor somewhat apart and oiled what I could see to make it turn easier.  This has taken care of the heavy current draw/bright dimbulb.  I have some filter hum, but not enough to interfere with troubleshooting.  The filter caps, of course, need to be replaced and will be after I get this thing to talk.  Replacing the paper caps got it to talk quietly, but with that long antenna, it should dance on the bench.  There is a 22mmf cap in the antenna circuit, ahead of the 12SG7 grid.  I suspect that mica cap of being bad.  I'm not 100% sure of my next step.  What kind of a signal can I feed to the input to test operation past the RF amp?  If this were a superhet, I would feed it IF. All the resistors check okay. This thing is so simple with so few parts, there can't be a lot wrong.  I aligned what little there is to align and made no real difference is performance.  Maybe more hash, but that is about all.  How can I prove or disprove my suspicion of the 22pf mica?  I'm open to suggestions, guys.  And thanks.

For the record, a General Electric model 50 TRF clock radio is no longer on my list of desirable things to own. This one will more than satisfy my curiosity.

WC, you can inject an RF modulated signal at any frequency on the BC band anywhere along RF amp chain right up to the detector to see if you may be losing gain along the way.
Jerry

Got it, Jerry. Thank you. I'll try that and see what happens.

I injected an RF signal at approximately 900 kc into the antenna of this radio. I tuned the radio to that frequency. I got strong output from the speaker. I touched up the alignment again, and it changed a small amount. Then I connected a known good radio to my outside antenna and got poor response. I started inspecting my longwire antenna and found it grounded where an oak tree limb was touching it. I cleared this and my antenna was back in business. I connected my repaired outside antenna to the little GE and actually got three or four stations, one fairly strong. We live in fringe country, so this is not an unexpected result. This little GE would likely perform acceptably well in a city with strong radio stations. It performs much like the four tube superhets I have. I will say that the TRF radio does not have as much noise on it as the superhets do. A huge, long antenna would be required to get reception anywhere. I am going to finish the tune-up and return the set to the neighbor lady.

I promised pictures, so here goes:

This is the victim.  A 1947-coded General Electric model 50 TRF clock radio. 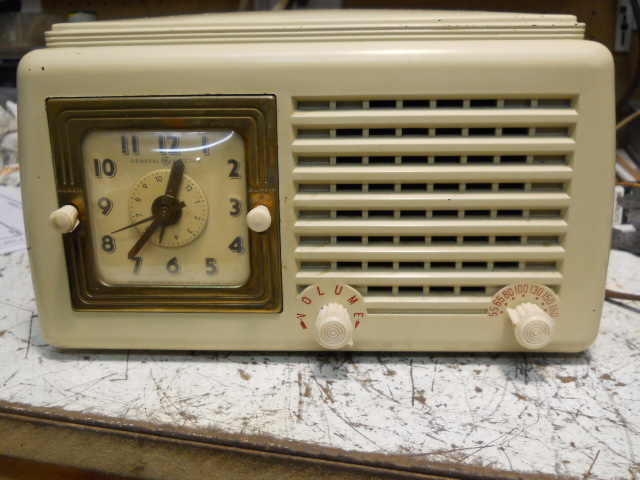 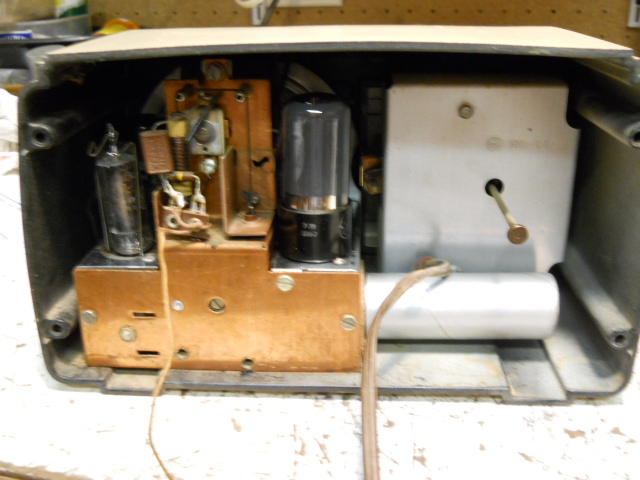 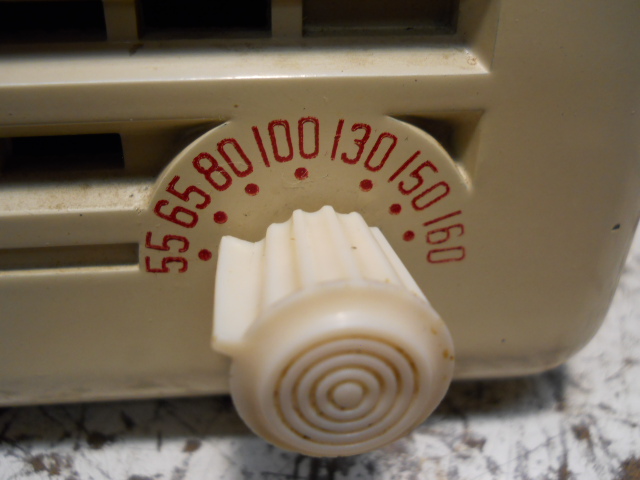 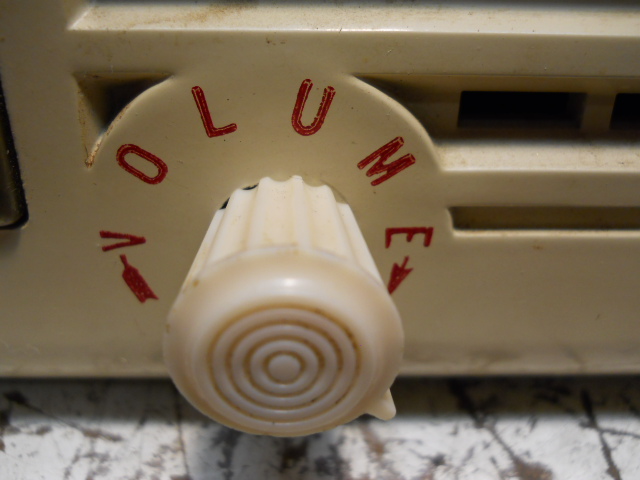 Not much to go wrong.  It either works or it doesn't. 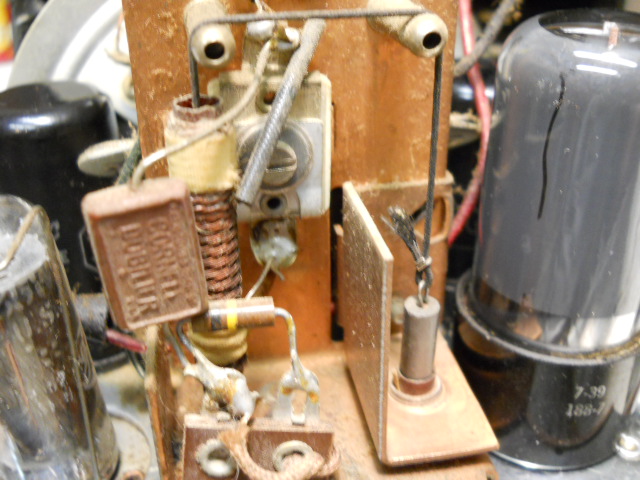 The chassis is stuffed with capacitors. This little chassis has the largest filter cap I have seen on a small set. 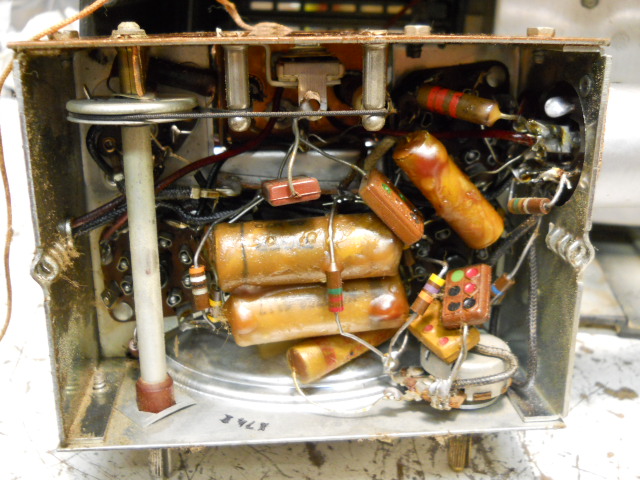 Thanks for your interest.

Congrats, WC. A cute little radio and certainly an interesting part of history. One tight chassis! Pray the tuning cord doesn't break as setting up those two coils properly could be a real headache!
Jerry

Is that the same miserable under the chassis set of tunning coils Airline used in their midget set??
1946. No I F transformers. Man, those filters in can are tight. NO room under chassis.
_________________
Please also join us here; www.videokarma.org/index.php

That little unit appears to be more for looking than for playing. Good luck with it.

It looks like that chassis was designed with the 35W4 in mind. Most of the radios I've seen where the 35W4 was a factory substitute had a 7 pin socket in a chassis hole punched for an octal. There doesn't appear to be enough room for an octal where that 35W4 is located.

This radio chassis was originally stamped for an octal rectifier socket. There is a dish-shaped adapter made for the 35W4. It has the "miserable" under chassis tuning coil. Only part of the tuner is under, the other half is above the chassis. There is a plate around the tuner under the chassis that adjusts the tracking on the dial. I used a screwdriver to pry up on it. The tuner only tracks so-so as far as being accurate. I have no earthly idea how one would EVER align those coils if the string would break. I have yet to figure out how the tuner setup works exactly. Why do they use two coils? I wonder if the later sets used that same tuner. I would still take one if I found one, though. I would have to make sure the tuner worked before I bought it. The thing about that is you can't tell just by moving the knob. You would have to pull the back and physically inspect it. This thing is so simple it is complicated. I enjoyed the experience.