I got this little critter, a Havanese rescue, in 2004. Puppy, a couple of months old, probably from a puppy mill, a shy somewhat timid little girl. For some reason, I became the sun, the moon, and the stars to her. There were other people in her life. like my wife, but she only had eyes for me. When I would leave NY to visit my parents in New England, my wife told me that she would stare at the front door for three days until I came back. She would eat, do her business, go for a walk, but when otherwise unoccupied, would just stare at the door, jumping every time a car went by, until it was me.

I really don't know what I did to deserve this level of devotion.

Anyway, she is dying. Lymphoma. She maybe has two to five days left. We made it an all dog weekend. Took her canoeing on the Peconic. I got one of those goofy vests that you can papoose a dog in, and we went bicycling for 100 miles. Gave her all the forbidden foods - which is another story. Took her everywhere. She is really tired and starting to have trouble breathing.

My wife asked me, when do you know it is time? I said, when she is too weak to stand, if she soils herself, if she is really having a hard time breathing, then that is time. I already went to the vet, paid for everything, because I do not want to deal with office stuff then. When it is time, wish me strength guys, because this little dog is very in tune with me and I don't want her to be afraid.

It looks like you gave her a good home and a good life. As sad as it is, the parting of the ways is a part of the smaller circle of life the little friends share with us. The sadness can be soothed with another little friend that will also need you .

My wife and I had to say goodbye to one of our babies a few weeks ago. We got our little black cat, Fudge, seventeen years ago. She was a little stinky ball of fur that was born on a farm and liked to roll around in horse manure. She immediately melted our hearts and or olfactory senses. If I was sitting down, she would curl up in my lap. She was the only cat that we'd let come in the bedroom. She'd cuddle up beside us as we slept and would follow me to whichever room I was in. She went downhill fairly quickly and when it was time, we took her to the vet, knowing that she wouldn't be coming home with us. It was hard to watch her slip away, but I was reassured by the look in her eyes. It was like she was saying that everything was alright and that she was ready to go.

It's difficult to lose a faithful friend and member of the family, but letting them go is the right thing to do, especially if they are suffering.
Take comfort in knowing that you've given Puppy a very loving home and a chance to live a full, happy life. I know she appreciates every moment that she's had with you and loves you more than anything. My prayers go out to you and Puppy.

Everyone here has said it better than I can. I know what she means to you. You will be in my thoughts and prayers. And I'm sorry for my "absence" during this difficult time. My best to you and your little critter.

Those who have never loved a pet don't understand the bond that forms between human and animal. Without that insight they have no way to understand the loss we feel and tha agonizing decision about when to let them go.

My first dog had congestive heart failure for nearly a year before she passed. In the end, the dog was down to skin and bones and was excreting blood instead of feces, Obviously I waited WAY too long. Problem was, nobody was giving me any advice and I was trying to follow the path of letting God call her home. God decided to teach me a lesson instead, and she lingered far longer than expected. In the end, I saw the pleading in her eyes for me to put her pain to an end, and I knew I had no choice.

Our animal friends talk to us... not with words, but the message is no less clear. We can read them and they can read us. Go with what you know. It will hurt like hell, but your pain will only grow stronger if you wait so long that your lasting memory of the dog is seeing that suffering in their eyes.

Bill, thank you for such a kind message. I well remember Diamond. And Greg, 75, WC, Motorola (sorry about fudge) thank you as well Today was the day, she was still eating, still standing and wagging her tail when I came home. But breathing 160-200 respirations a minute, even in a AC chilled 62 degree room. Wincing with pain and could not put her head down because of the lymph glands in her neck.

It was time. They let me hold her during both injections, I maintained eye contact until she faded away. Licked my face and went to sleep. I felt her heart stop under my hand. I was strong, never lost it until it was over. I think that was due to the prayers of my TRF forum brethren. Thank you guys.

Yeah, at 55, I probably have one more rescue in me. But not for a long while.

I am truly sorry for your loss.

Thank you 75. Just realized I never said her name, Mishka, means little bear in Russian, she is a Havanese, the only dog breed of Cuba. Apparently, Fidel and such gave puppies of their only national breed to Russian dignitaries as gifts. So she is Russian via Cuba. Mishka was the mascot of the 1980 Olympic games.

Here she is, last weekend. 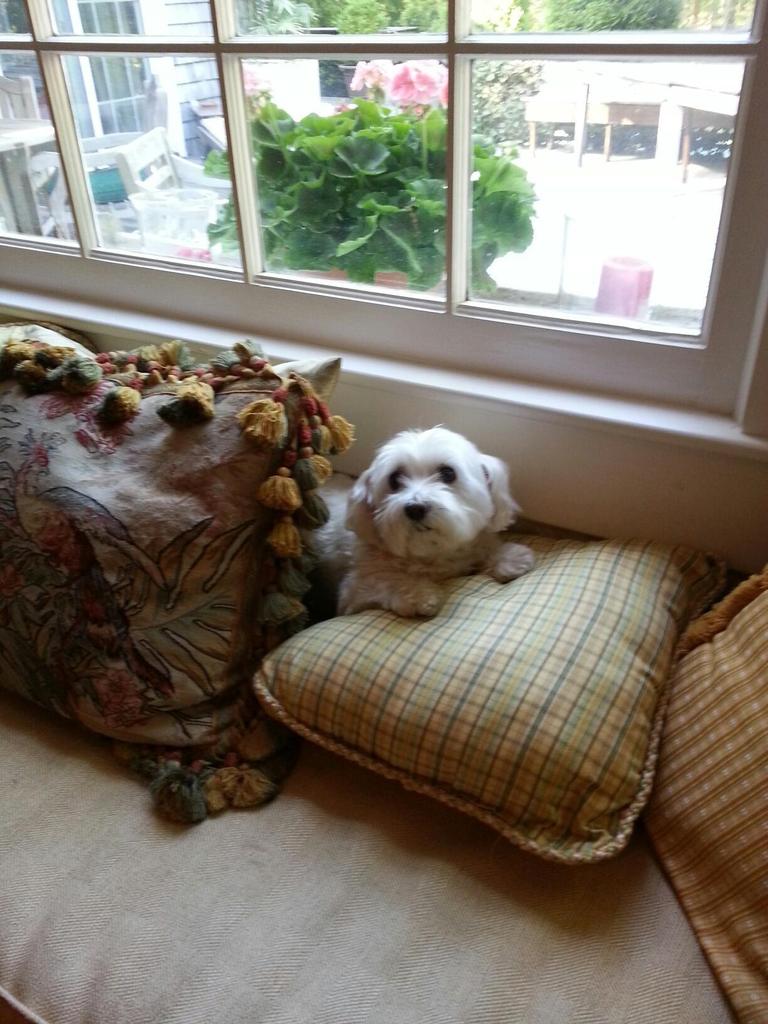 And my favorite Mishka story, and then I will shut up, was when she charged, barking, a 160 lb. six point buck that was approaching Ruthie. The buck meant no harm, was just overly tame because a neighbor had fed it horse food since it was an orphan. The buck pawed the ground a couple of times, before fleeing. You could tell it was a little confused running away from an animal 1/20th its size, but smell won out. I'll stop now. G'night guys.

My thoughts are with you, as a dedicated mutt adopter and dog lover.

75X11 wrote:It looks like you gave her a good home and a good life.  As sad as it is, the parting of the ways is a part of the smaller circle of life the little friends share with us.  The sadness can be soothed with another little friend that will also need you .

Couldn't have said it better.

My dog Rocky is arrogant, overbearing, spoiled, unique and aloof; and I love him.  We are currently dealing with allergies that have open sores over half of his body.  The medicine from the vet doesn't work better than Benedryl.  It's a seasonal thing.  In a month it'll start to clear up.

Since he's 11 I think about when I'll have to let him go,  I know that the best thing will be to immediately replace him.  But that will be difficult.

The allergies and hot weather really go together well. (not) I had a little dachshund that would lose a lot of her hair during the summer with allergies. We would give her an oil supplement. It wouldn't do anything with the allergies, but soothe her skin.

Too true. I give him special baths.

I has been 6 days of not hearing that bark when you put the key in the door. All of your kind messages have been appreciated, but there is one I did not pay enough attention to.

You are are a true dog lover. Just a word from my past. Mishka had an autoimmune condition called "protein loosing gastro enteropathy". She frequently excreted blood. We pulled her back from the brink in 2006, 2008, hemocrit approaching one going up, albumin approaching one going down. It took a couple of pretty heroic efforts from emergency vets to get us the next seven years. We had to cook her every meal, boiled chicken and organic brown rice. We tried alternate proteins like rabbit and bison and venison, but chicken was best. Good thing, that other stuff cost a fortune.

My point was she got sick a couple of times a year (bleeding) and she got really skinny and recovered. Don't feel bad. You didn't keep her too long if she wasn't in distress. God bless Greg and this is the last I will say here about this.