I got this little radio in that pile of stuff I bought at an auction a couple months ago. This is my first Sylvania radio. It is salmon and white plastic with a large black Telechron clock face. The cabinet is very nice now that all the grunge is off. This set has that odd tube complement 36AM3, 32ET5, 18FX6, 18FW6 and 18FY6. I plugged it onto my dimbulb and Variac/iso transformer and ramped up voltage slowly. The clock works just fine, the radio was dead as a stump. No filaments. This set has the flimsiest PCB chassis I have ever seen. Not much thicker than a playing card. I found one entire corner broken off the chassis. This corner housed the tuning cap and the filter cap and the oscillator coil. There were several broken traces, including the heater string. The first thing I did was to hardwire the chassis where there were broken traces. Then, with my Exacto knife, I cut out the traces where the crack was about 1/4 inch or so. I glued and clamped the PCB with Elmer's construction glue to stabilize it. Allowing this to dry overnight, I then covered the repair with two-part epoxy for strength. I took the clock mechanism somewhat apart and cleaned and lubed the mechanism, particulary the "always on" stuck power switch. This chassis is particularly ungainly to power up outside its cabinet, so I just ran resistance checks, and finding everything somewhat okay. I put the speaker, clock, antenna and chassis back into the cabinet. I again ramped up voltage slowly on my safety equipment, and, much to my surprise, the radio actually worked really well. It could technically stand to have the alignment touched up, but I'm not sure I have another repair left in that flimsy chassis. I've decided to leave well enough alone. It works, and that is more than it did when I got it. The frau thinks it is cute, so she'll probably cabbage onto it anyway and it won't get played much. I'll get some pictures on here after I get them downloaded.

Sounds like a nice radio. I love large dial clocks. I have a Westinghouse dirty white clock radio. The clock takes up the entire front. The bad news is the white heavy duty cheater cord has turned into cement.
_________________
Please also join us here; www.videokarma.org/index.php

Here it is in blue

They made this model with and without a clock.  My radio has the same fluted cabinet and the same tuning knob.  On the left side of the cabinet is a large Telechron clock.  It takes up almost half the cabinet.  The volume control knob on mine is smaller.  Both radios share the same chassis.  It seems to be a fairly good performer.  Time will tell.  Thanks for posting the link, Mr Mez.  I wondered what the clockless model looked like.

Bill, I have found many clock radios with the heavy duty cords where the cords were almost unusably stiff. In those cases, I replace it with a normal cheater cord. I'm not going to power an appliance with it anyway. This radio was on the parts pile. It had three things going for it. It was a Sylvania, a brand I did not have in my collection. The cabinet is really nice and an attractive color. And it had that unusual tube complement. I had had some previous experience successfully repairing that GE stereo with the burned traces on its PCB, so I attempted this one. I'm wondering if I may have more problems when the chassis runs and gets really warm.

ooops! I thought the one digit off was for color, I forgot yours was a clock radio. It's funny how we make decisions on which radios to keep. I have an Admiral clock radio that was in my donor pile. I picked it up the other day and noticed the cabinet was in perfect shape but dirty. I cleaned it up and have a very nice pink and white clock radio. It's only a cheap 4 tube unit but plays well. It now has a stay of execution!

I don't like throwing things away. I have fixed most of my parts sets. I still have maybe a half dozen, but the cabinets on all of them are beyond help. I knew this little Sylvania had a bad chassis because the tuning knob just sort of floated around in the cabinet. I pushed my luck with this radio. I have a bright pinkish red Philco AM-FM in my parts pile that has a big chunk out of the top of the plastic cabinet. It works okay for not being restored. The back is there and good, so I may try to fix the cabinet somehow and give it a stay of execution.

With older PCB's that are suspect of any floating opens, I remove the board and reflow all of the traces and clean all the flux from the board, which gives an opportunity to inspect all of the component joints. any full breaks will have a good chance of showing up as the break will cause a "holiday" in the solder run and that can be bridged with a bit of wire. I usually use a soldering pencil with a tip point larger or smaller proportional to the trace size by thickness and width.

I have done that on a PCB that was in good condition. This one was broken in several places. I was not confident of my skills to attempt to reflow the solder. I use bell wire, which is solid wire and small in diameter. The bell wire method has worked so well for me that I hesitate to mess with progress. Someone with more skills than I have or steadier hands could use your method with better success than I would have. Hardwiring gives a certain flexibility that might not be possible with reflowing the traces.

I usually only use wire to bridge mechanical breaks where the solder won't flow effectively across it. When you clean the traces and flux them well, it will bead really well on the traces and eliminate most solder bridging. You are right in using solid wire. Many times I'll just take a strand of multi strand wire and use that. 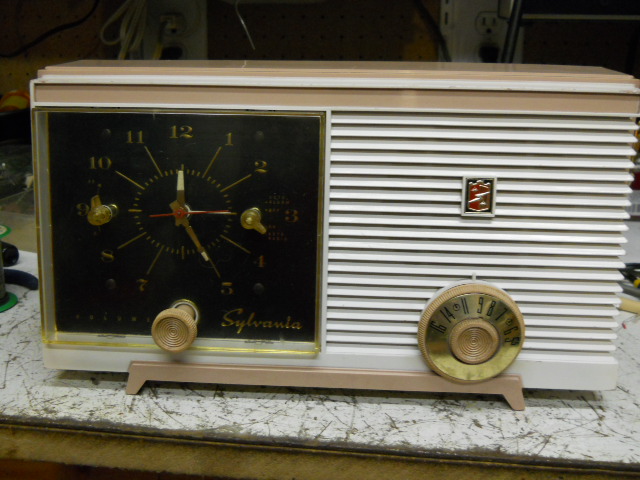 You may notice that my bench is a disaster.  How does anyone mess with this old stuff and keep his bench neat and tidy? 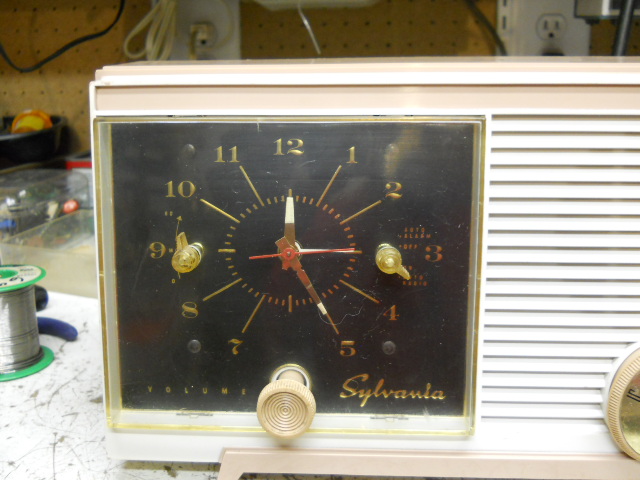 I must have not gotten the clear shipping tape in good contact with the cabinet.  I put the cabinet thru the dishwasher and I see some water crept under the edges of the tape.  No biggie.  This is a $5 clock radio, not a Zenith Strat. 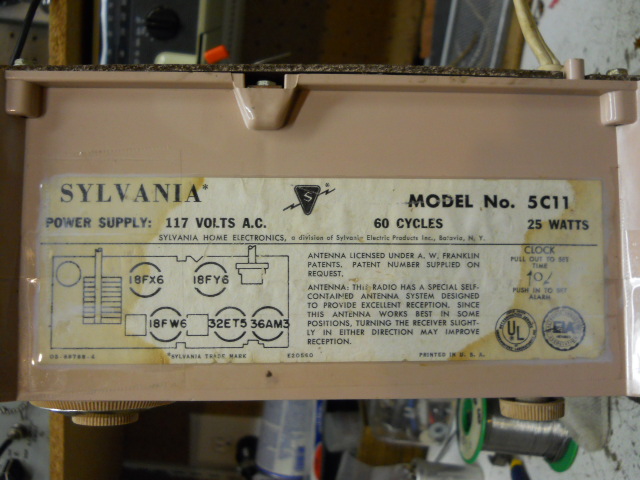 Other than having a good dose of filthy, this little set is in nice shape.  The back is good, it has both clock knobs and both radio knobs.  No cracks or chips that I can see.  The guy with the Strat is no prouder of his set than I am this one.  I brought this one back from the brink. 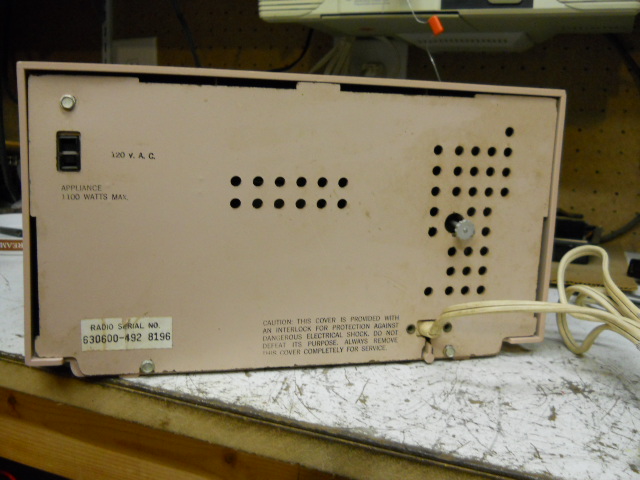 Nice radio and the clock knobs look to be good too. Every clock radio I find has missing clock knobs and/or broken/bent shafts!

I though only RCA's have that tube line-up.

The tubes in this radio are all Sylvania branded, and I assume Sylvania supplied.  I did not check the codes.

I was under the impression for a time that the "alternative" tube complement in this radio was an effort to circumvent RCA patents.  I really figured that RCA did not use this tube lineup.  I now have an RCA, a model 1-RA-11 that has this lineup in it.  And you have one.

One of the reasons I decided to fix this radio was that it had all its knobs.  Nearly all the other ones I have were missing at least one knob of some kind when I got them.

The RCA I mentioned was partially sawed in half when I got it.  Looks like somebody took a band saw to the cabinet.  I am going to fix the cabinet and then hotrod it.  It is plain gray now, and I think a nice two-tone or even a three-tone paint job would brighten it up a bit.