I purchased this because it sort or matches the style of my Superior Instruments TW-11 tube tester and I really like the wooden cabinet test equipment. Besides, I actually didn't own any factory made signal tracer before now. I have a couple homebrew units that work as well as anything--but have never had a vintage manufactured tracer and have never seen anything quite like this one. 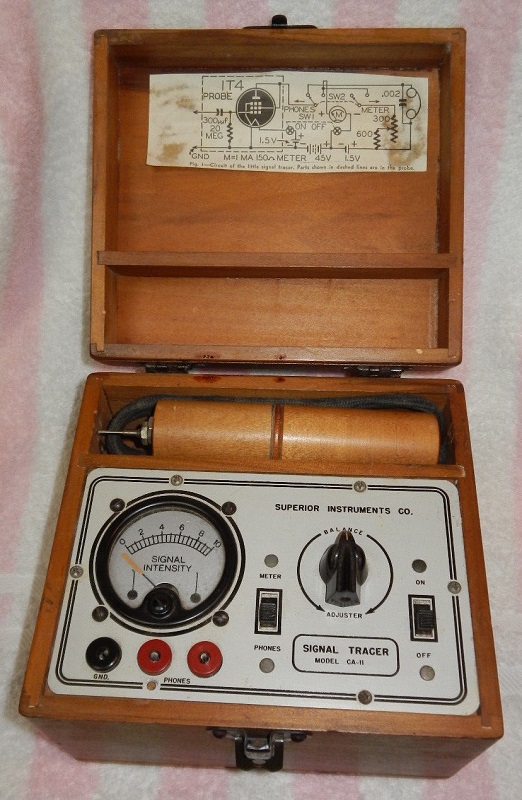 I sanded down and refinished the cabinet, reblued the screws and hinge hardware, and replaced all the cloth covered wiring. The schematic in the lid was scanned and digitally cleaned up for reprinting. 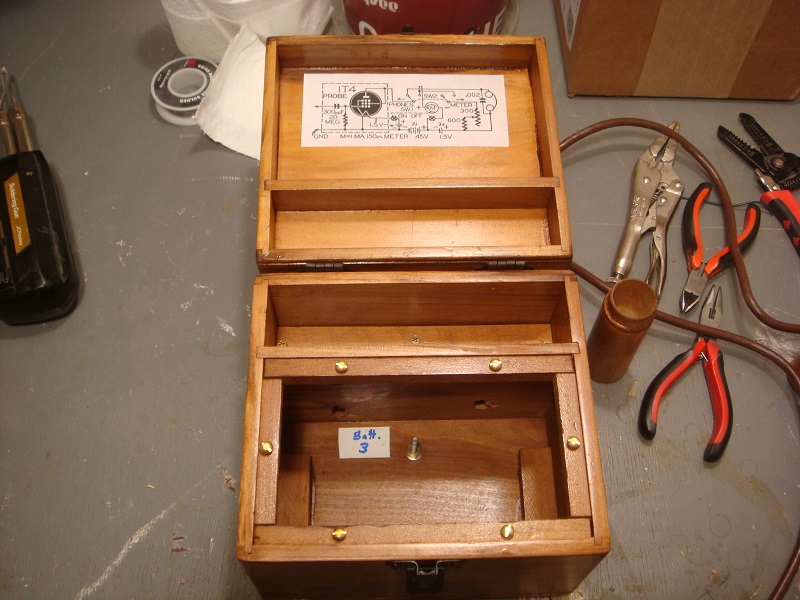 When I removed the old schematic and looked at the back, it became apparent that it had been cut out of the original assemby manual. Interestingly, the unit was not wired according to the schematic here. I don't know if it ever worked or if it did work and was intentionally modified at some time after assembly for some particular reason. 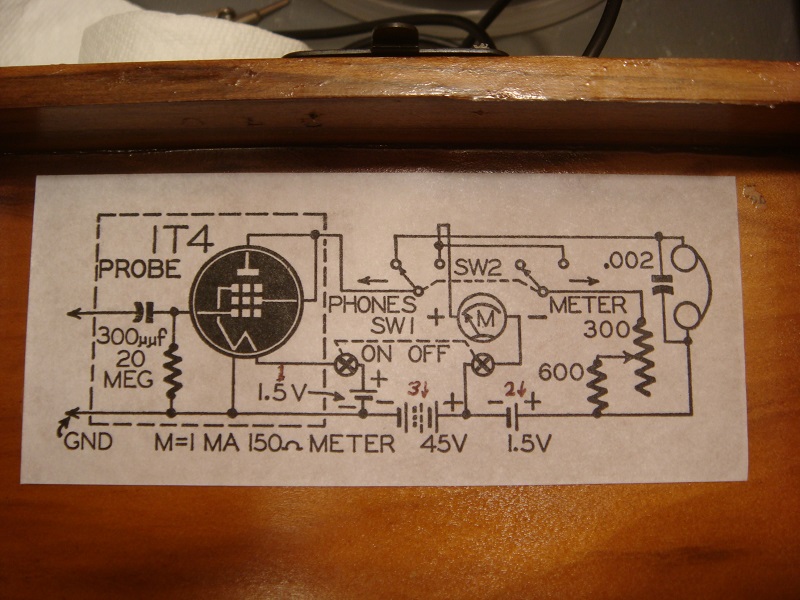 I replaced the coupling capacitor and grid leak resistor in the probe. The 1T4 pentode is wired as a triode grid leak detector and amplifier. The plate current follows the radio frequency modulation and feeds audio frequency current to the meter or phones. The three wire cable to the main unit was not shielded and so was replaced with another unshielded cable. The original cloth covered cable was intact but pretty tatty. 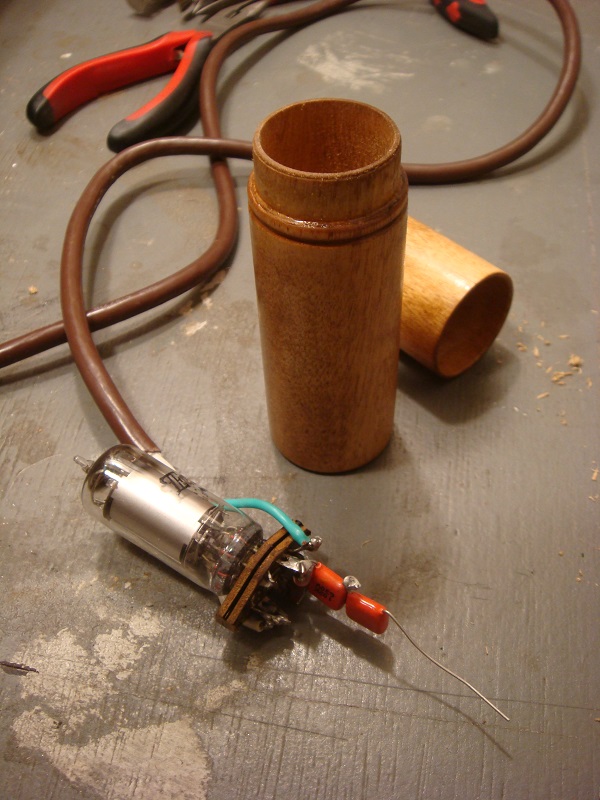 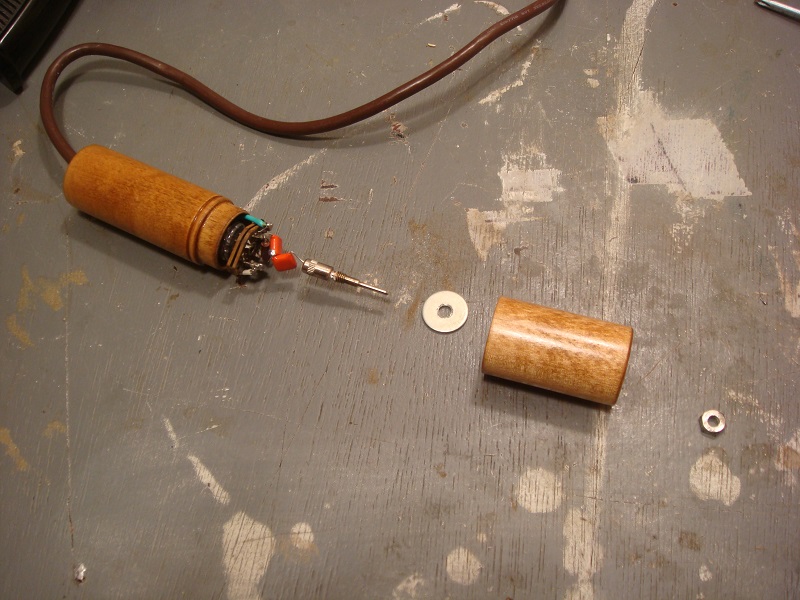 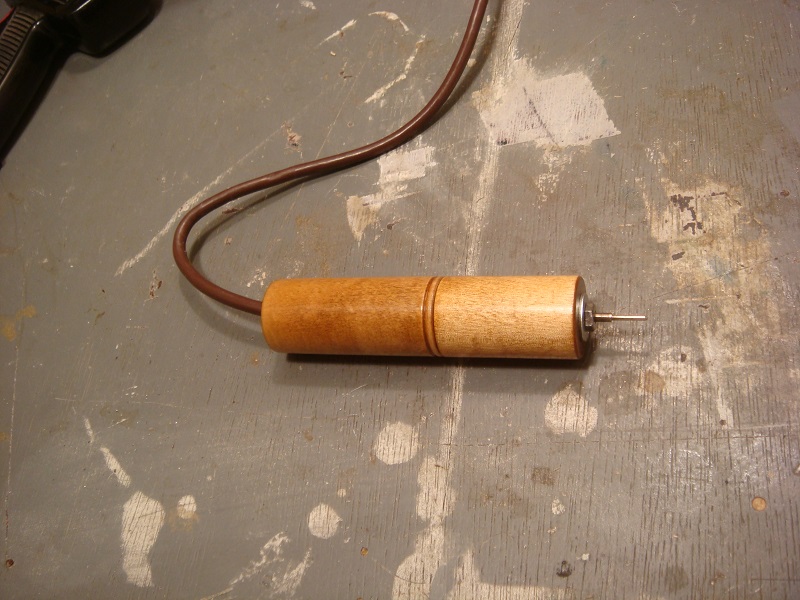 The main unit was in good shape except for a cleaning and disassembling the meter enough to clean the inside of the glass and repainting the faded orange on the pointer. There was a paper .002 uF capacitor that needed to be replaced and a 600 ohm resistor that I replaced at the same time. The potentiometer and two slide switches needed cleaning and lubrication as well. All the cloth wiring was a bit on the dry side and was replaced. This is when I started fresh from the schematic and got it sorted out. 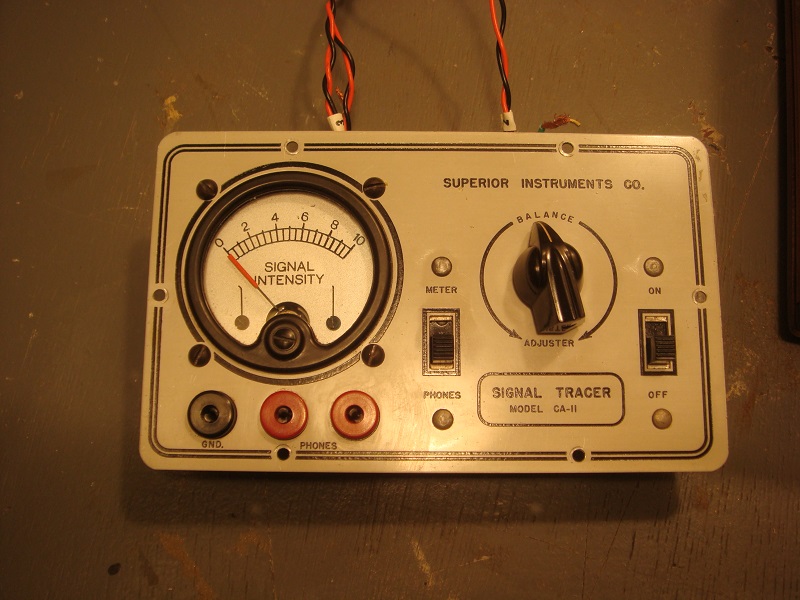 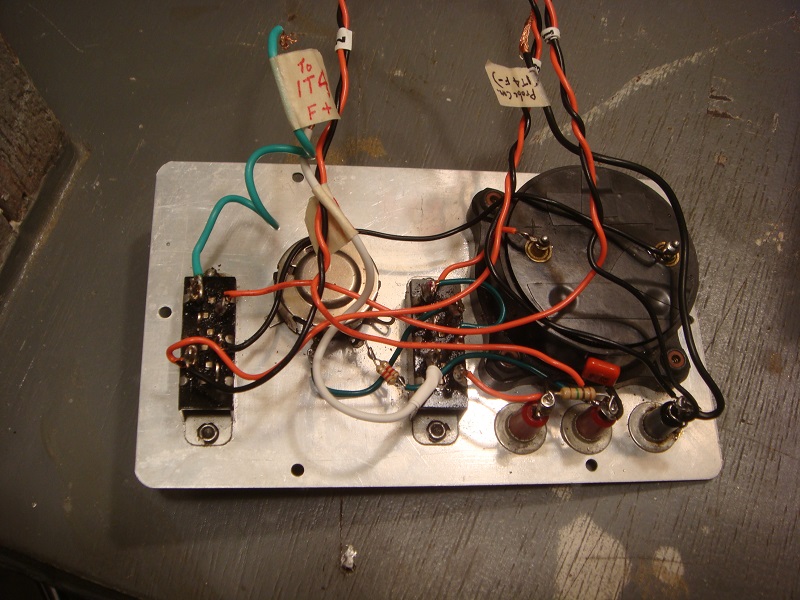 The new earphone was fitted with homemade pin plugs so I could keep the original jacks. I also remade the grounding cord. 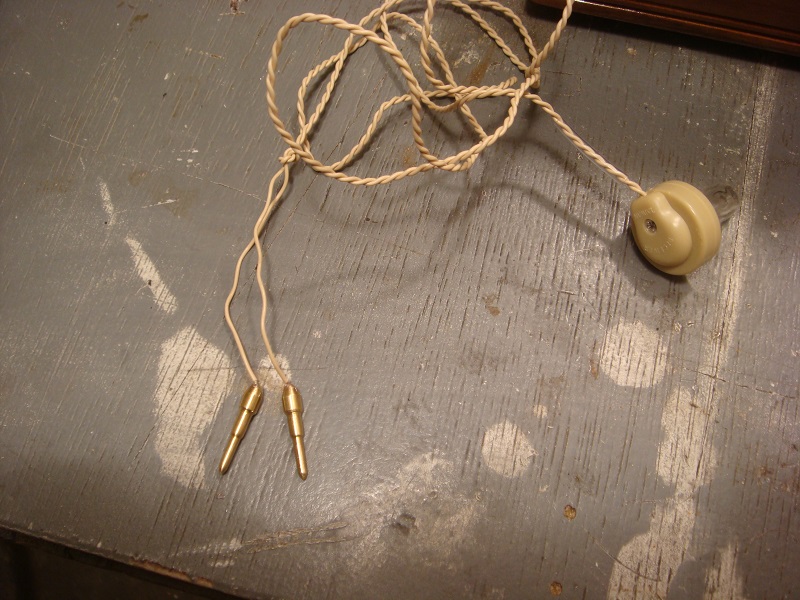 I think the batteries that came with the tracer are a wee bit past their expiration dates. No leakage though. 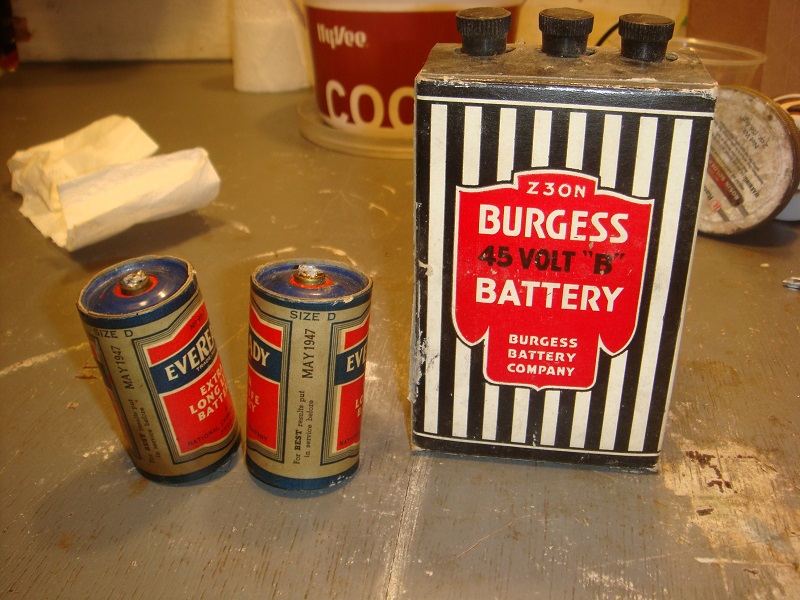 I don't trust the new batteries (cells) as much as the old ones, so I put them in a plastic liner. The 45V B battery was maded from 5, 9V batteries in series. I had to make a hold down for the B battery because it is smaller that the original. 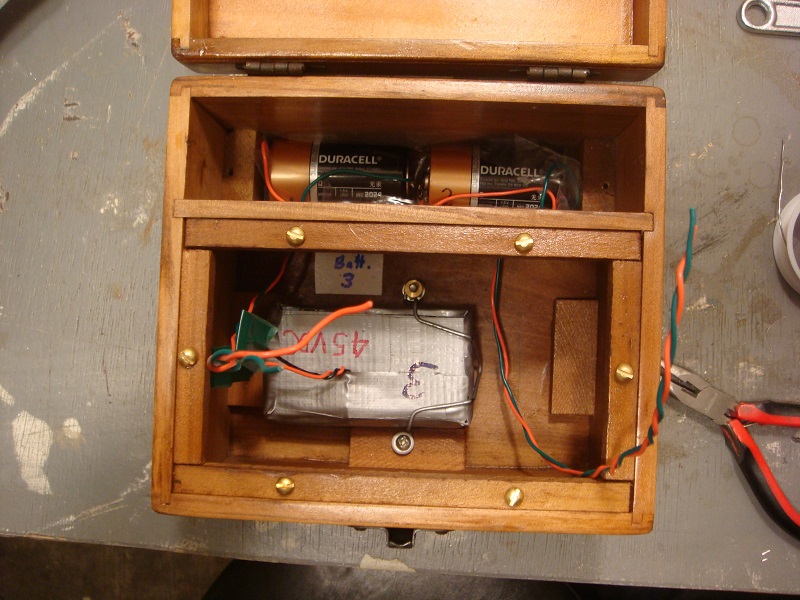 The filament supply cell (left D cell) and the balance cell (right D cell) fit under the panel that forms the floor of the probe storage compartment. There is a divider between the cells that is part of the panel. 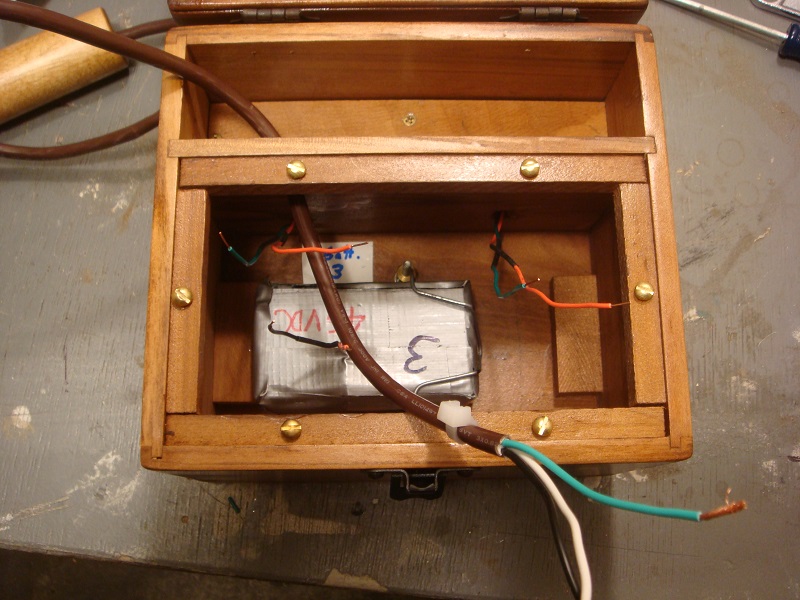 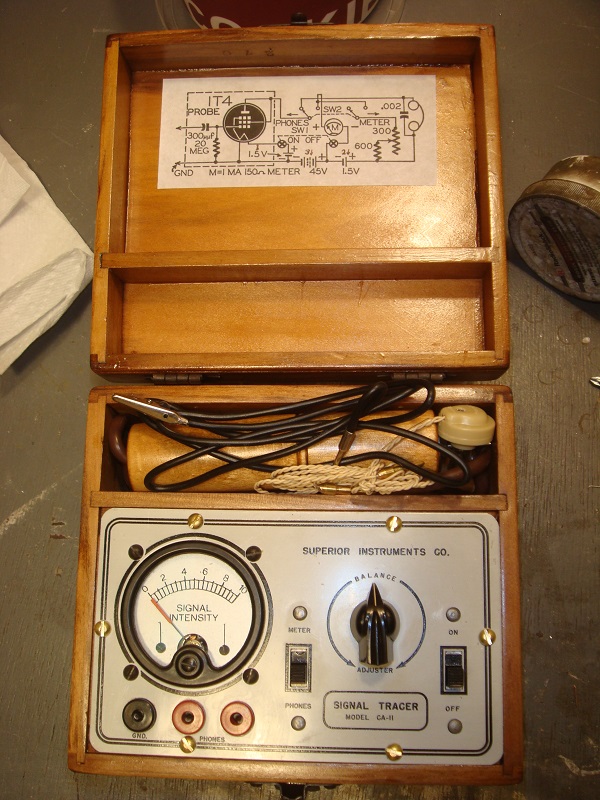 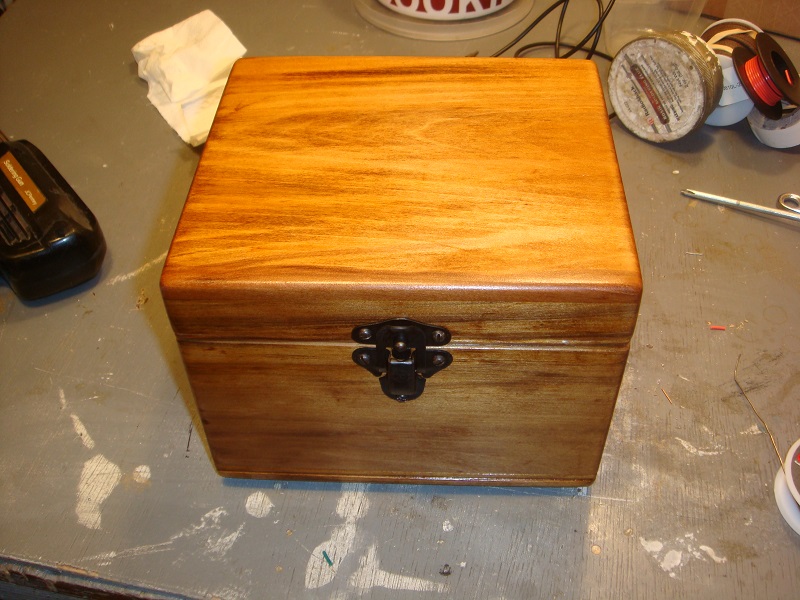 A nice companion to my tube tester, and it works quite well for listening into, or metering, an R.F./I.F. signal and it also picks up audio signals. 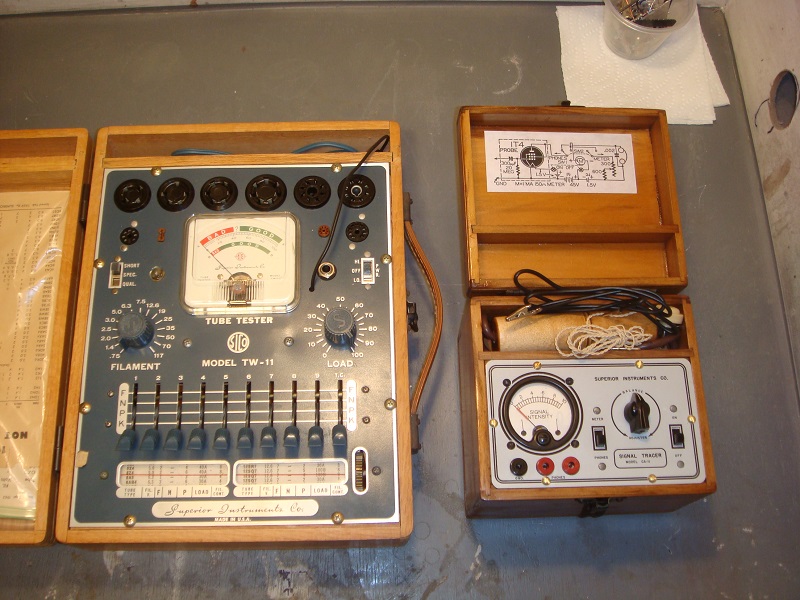 I have actually now used it to locate a bad IF can in a prewar (octal tubes) RCA 5 tube.
I like how the nature of the grid leak detector picks up modulated RF/IF or audio frequency directly without throwing a diode switch to cut a diode detector in or out, and also it provides gain all in one simple tube circuit...Ingenious old timers.

It is not as sensitive as the later Eico 145s or similar types with their germanium diode detectors and three or more stages of following audio amplification--but it is adequately sensitive to drive the meter with modulation or hear the signal in the earphone right up to the antenna lug, if there is a 20 foot wire or longer attached to the loop (at least for my local AM stations) or, of course, if a signal generator is used.

Can't leave anything alone...Put in an extra stage in the main compartment. A CK6088 subminiature pentode ("pencil tube"). Now it will pick up right off the antenna lug and still is not overpowered to overdrive the meter on high signal levels from later RF or audio stages. The earphone does overdrive now on those if the regular probe tip is used, but with 5pF capacitor on the tip fixes that for high levels. I could tone down the earphone with a potentiometer, but I don't want to drill holes or do anything not reversible. Just gotta tinker...