I thought I would post my new work area. A little background first. Years ago I had a 12x12 workshop that I built like these little minibarns you see all over. When we built our house I planned on getting half the basement for my shop, which would have been bigger than the 12x12. After the steps,shelves,more shelves I wound up with less room than I had in the 12x12. So I wound up tearing down a few old buildings to make me a workshop of 30x52. Its great but I heat it with wood and have no cooling other than fans and windows. We built a porch on the back of the house out of the scrap lumber left over from building the house. This year we decided to replace the porch as it needed a major overhaul. So we had it framed up but we also had part of the porch enclosed for a new room. I finished the insides. We wound up with a new dedicated hobby room. I have it finished and I am setting up shop so to speak now. I thought some of you would like to see it. I also will still use my outside shop but it will be more for refinishing,woodworking and messier projects. 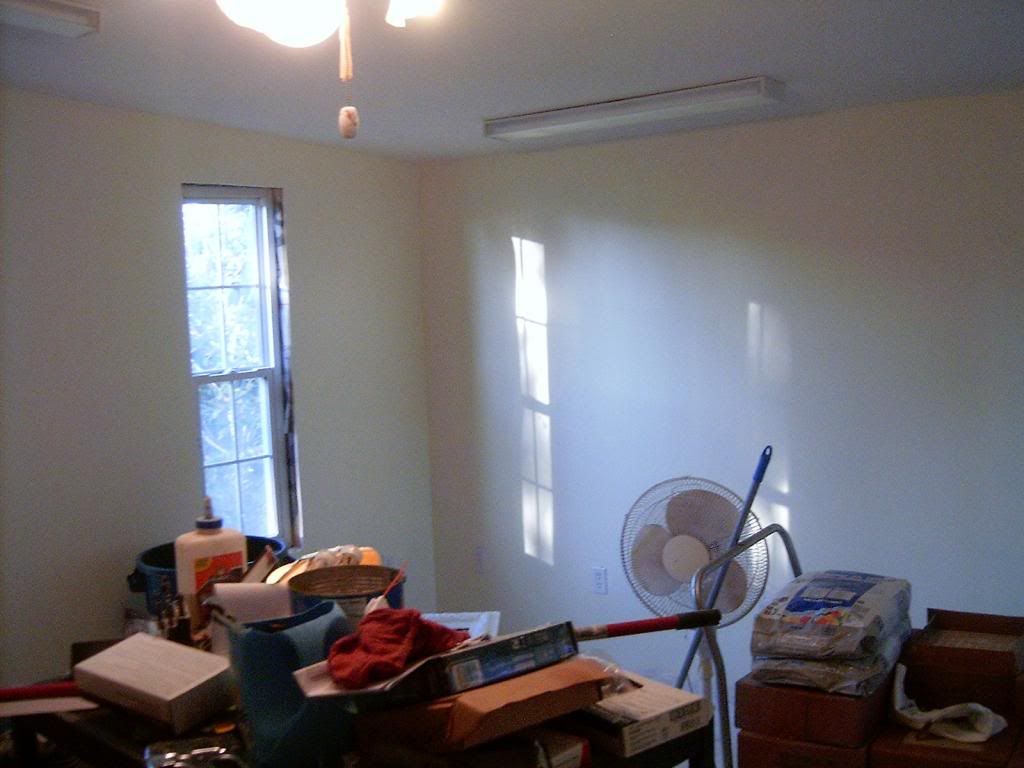 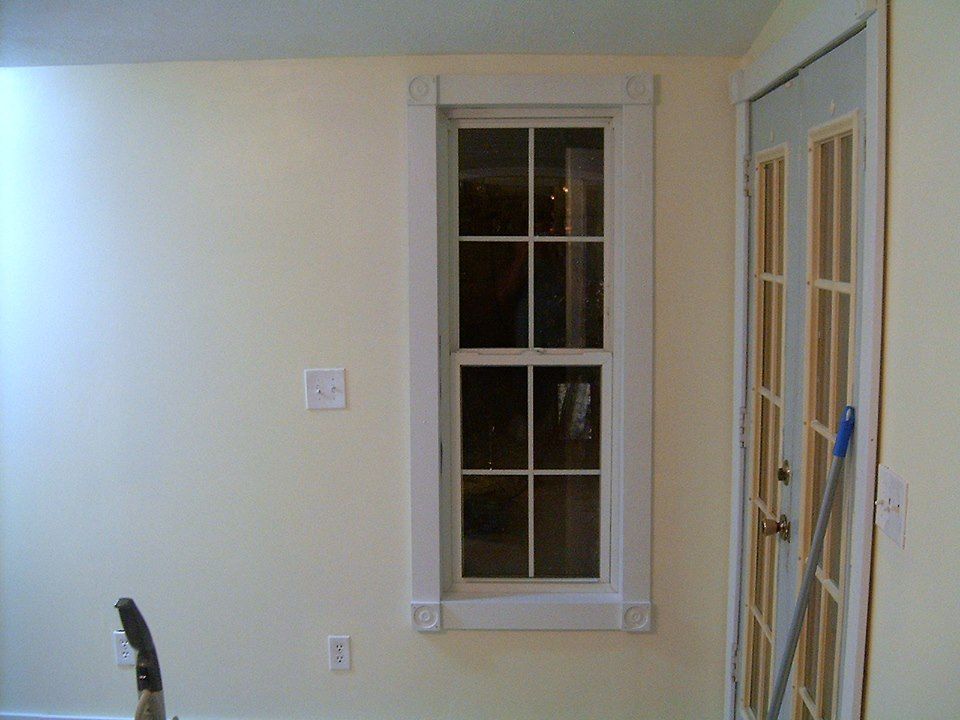 This is some of the detail of the room. Since our house was Victorian in style I wanted to do some rosettes for the windows and doors. After I checked the price I looked at rosette cutters. I was able to get a cutter for about half of buying the rosettes. The bit wasn't hurt either so I can use it to make more. 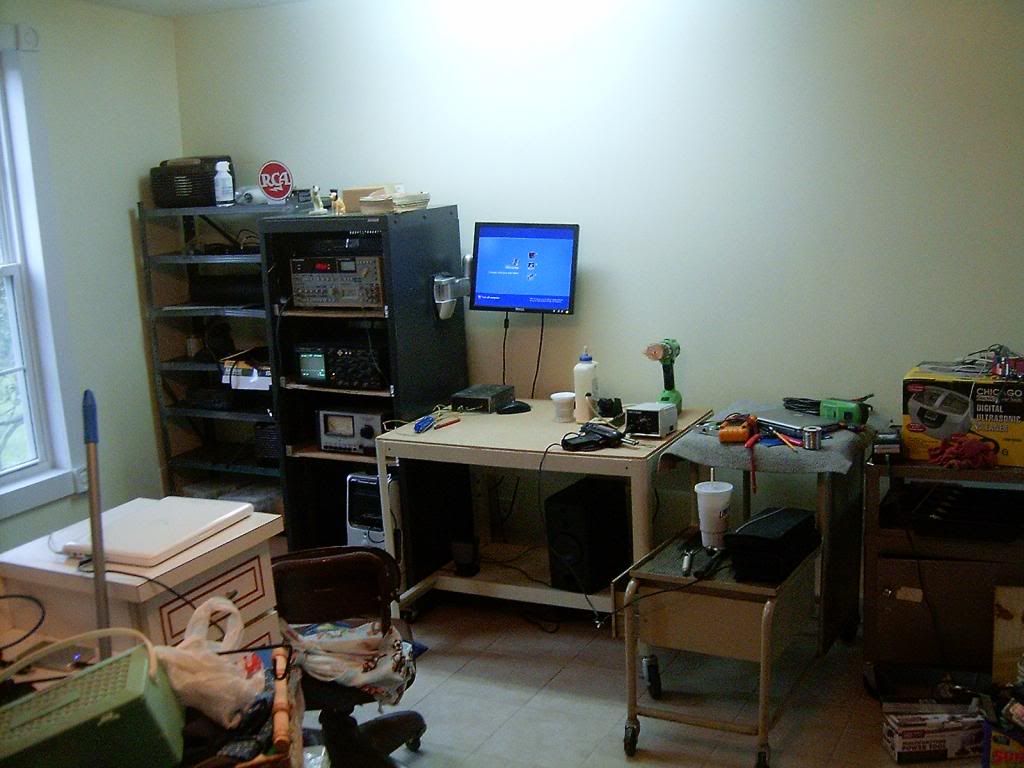 Here is my new work area. Most of the furniture was stuff I saved from the dumpster. I had the metal shelves. I had a rack mount cabinet I saved from the trash bin. I tried giving it away but never did find anyone who would come and get it. So when I got to thinking about this project I thought it would be great for this. I added some wooden shelves to hold the test boxes. I also saved a old metal computer cart from the dumpster. I got a piece of 3/4 MDF to make the top of the bench. I picked up the monitor arm at goodwill for 5 bucks. I saved a old typerwriter table and never thought I would use it with the drop down shape. I have found it to be extremely handy. I use the higher end to hold my schematics and the lower end to hold the plastic boxes that house my new caps. Its really handy. I also have another small cabinet saved from the scrap bin that is perfect for my untrasonic cleaner. Maybe I can finally use it after two years of having it. 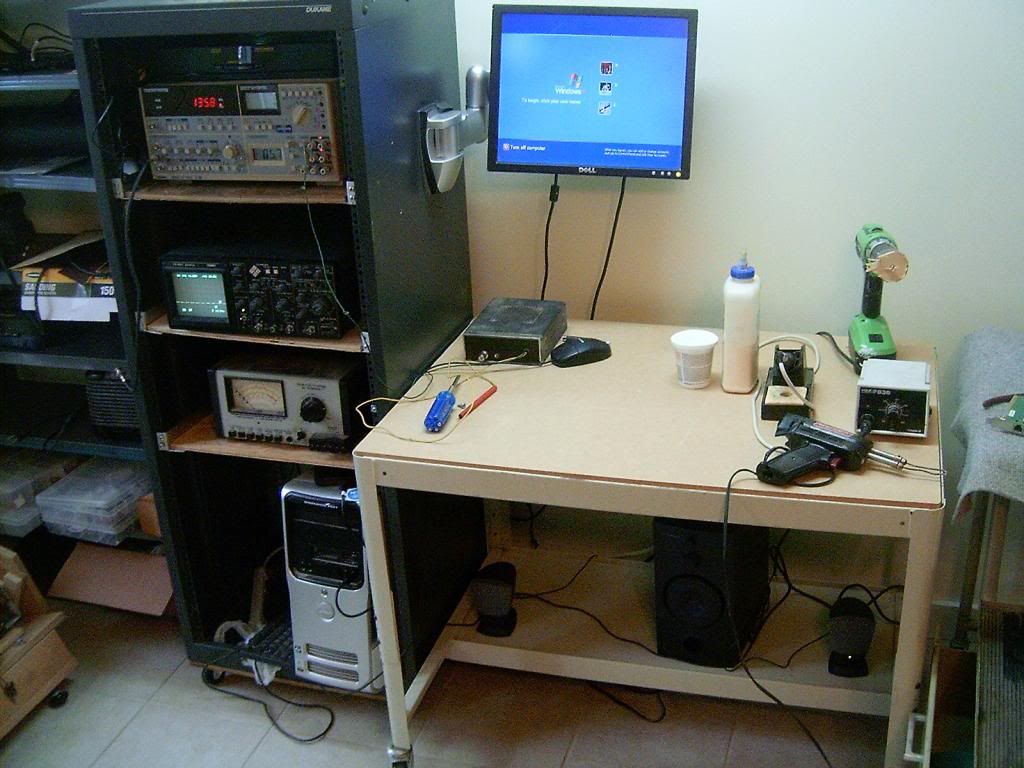 Here you see a better picture of the bench. You also can see the plastic boxes on the shelves I have my caps in. The computer was tossed out due to a hard drive. I had one so I built this one to hold my radio repair stuff in. I also have one of the whole house transmitters in the rack to broadcast for radios when I get them going.
Well thats it for now. Hopefully I can get out there in a few weeks and fix some stuff. I need to fix a bunch and sell a few. That way I will have some cash in the spring for the next radio meet.

Looks mighty nice to me, too. I would need about 20 feet more bench than that, but you are obviously lots neater than I am. You did a nice job on the drywall, what I can see. Good job, Willy.

I like the windows. It is always good to be able to stretch ones' eyeballs every so often while working on a project.

Very nice job Will. It looks as if you took what could have wound up as a spare storage room and turned it into quite nice a workspace.

Thanks for all the positive comments. I still have the old workshop behind my house to work in when needed. I think with this workbench I can work on almost everything I work on, just one piece at a time. No leaving unfinished projects on it. Mainly I wanted a place inside for when weather is too hot or too cold. I still have a lot of test equipment out in the shop. I also will leave my tubes out there as well. I am bringing all my nippers in the new area though. I hope to be able to work in the next wee or so on the philco hippo. I bought it a month or so ago.

As far as the drywall goes this was the first time I worked with it. I needed a way to get it on the ceiling and I came up with a jig to help. Here is what it looks like. 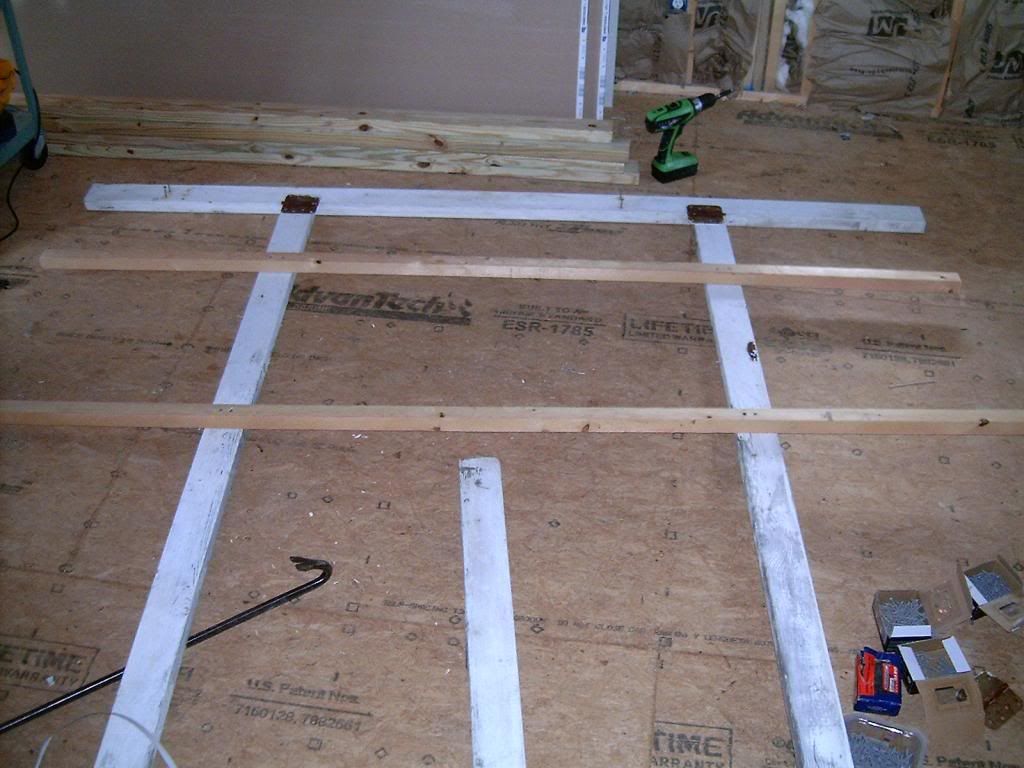 The white 2x4 going across is screwed into the ceiling or rafters. Then the black squares you see are hinges. They are connected to the two 2x4s that go up and down. Then there are two unpainted pieces across. These help tie the two white 2x4s together and they also support the sheetrock. That one board not attached will have a hinge on it as well and it attaches to the lowest unpainted board. On the other sides of the painted boards is a piece of wood on each for a stop. the way it works is to slide a 4x8 sheetrock on it and then force it up. The middle hinged piece of wood holds it up. This was made up of scrap I had around.

Here is it in action. 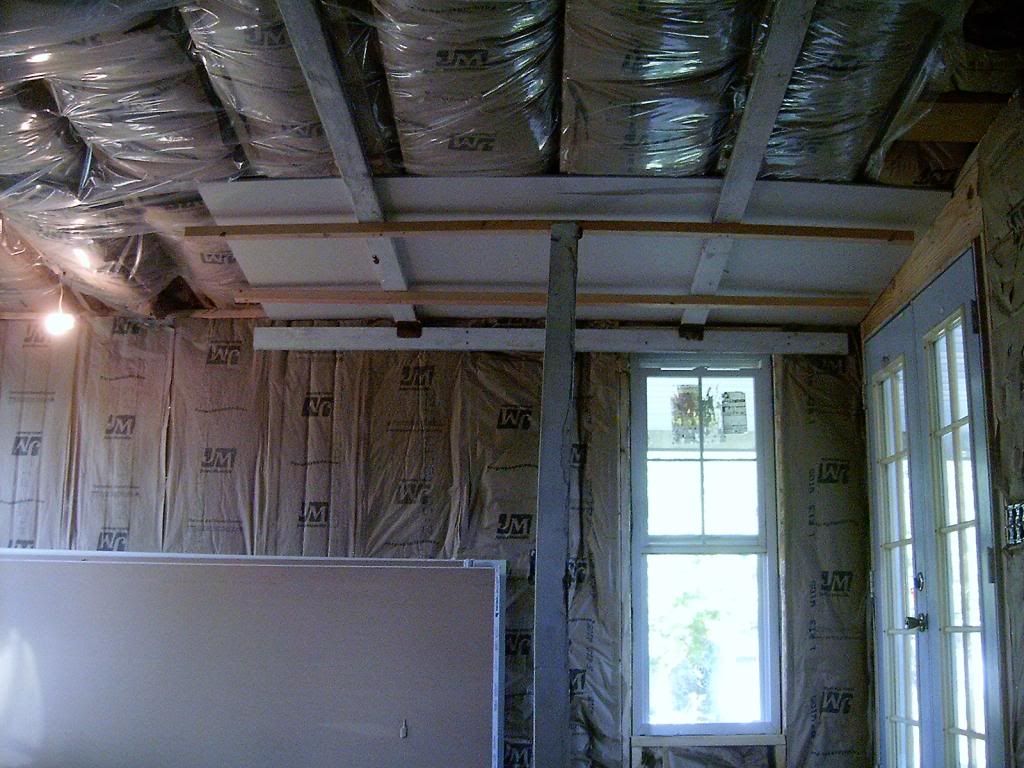 The way I used it was to screw it in place, raise a piece up and get it to where it was snug but I could move it a little to get it where I wanted. Once I had it I pushed in the "leg" to tighten it. I then screwed it in. On the sheetrock I ran a screw through it ,the sheetrock already up and to the rafter. Once the new one is up I then take this down and put screws in where the support screws were in. It worked great and I did it by myself. I only had to put up about 8 pieces so I didn't want to invest in a lift. As far as mudding and doing the ceiling texture I watched a lot of youtube videos. That helped out a lot.

They make drywall jacks that you can rent. Looks a lot like what you have there, really.

It's even more impressive seeing how you did it! Good work!

Thanks again. I am going to be making shelves for my books above the work area this weekend. As far as renting a jack I have 3 reasons I didn't. One I didn't see the need for only 8 pieces if I could figure a way to do it. 2, I live so far out in the country we import our sicks from the sticks. 3. I am too dog gone cheap to. Seriously though on a lot of tools here is what I do. If I see a new tool or device I will pick one up like at harbor freight. I will get it there to see if I actually will use it. If I don't use it then I haven't got much in it. Then if I use it a lot and wear it out then I will spend the cash for a better quality of one. I have found on HF stuff some of it is junk but some of it is almost as good as name brand stuff. I bought a cheap reciprocating saw there that was junk. then they had a nice looking one there on sale cheap and it has turned out to be great.

Years ago I saw this 80+ year old man who had a fantastic setup. He even had a tire changer and balancer. My fil was there and he said something about it. The old farmer said he learned a long time ago if he needed something done he would find the tools and do it himself. He said he bought it second hand and he would just buy tires on sale. He said that over 30 to 40 years that he had saved enough money to pay for that tire changer setup to pay for itself a few times. So if I need a tool I will just go out and buy it. I might have bought a lift but I put so much into the porch I was cutting it close.I did look up the price for a lift at HF, Maybe next time. I did splurge and buy a cement mixer I need to use.

I put some shelvesd up in the new room. Now it feels like a work area to me now. I put my riders and a few other books up on them. 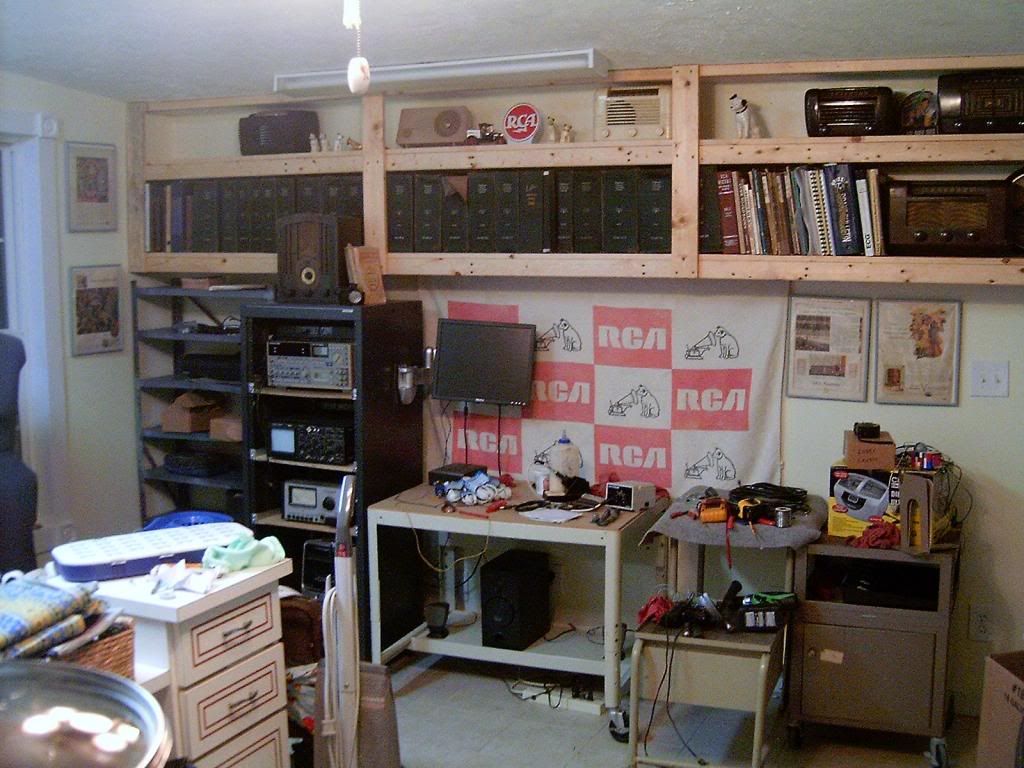 Very nice! Out of curiosity, what make/model is that white radio to the right of your vintage RCA sign? I want one

JasonAMFM wrote:Very nice!  Out of curiosity, what make/model is that white radio to the right of your vintage RCA sign?  I want one

You are way too neat, Willy. Would you like me to send you some clutter? I SPECIALIZE in clutter. Nice work area!

JasonAMFM wrote:Very nice!  Out of curiosity, what make/model is that white radio to the right of your vintage RCA sign?  I want one

Ah, maybe the 1947 RCA Victor 56x2. Sorry to go off topic, but it caught my eye. Many compliments to your workshop.

Ah, maybe the 1947 RCA Victor 56x2.  Sorry to go off topic, but it caught my eye.  Many compliments to your workshop.

Thanks for the tip, unfortunately, my budget wont allow another radio purchase at this time

I bought the Westinghouse

I'll post pics when I get a chance. Hopefully that RCA will still be on there next payday.