If you've read enough of my past postings you probably know that I am kind of an RF Probe fan. I was always sort of fascinated that one can measure--with some limitation--radio frequency voltages with an ordinary DMM or a VTVM on the DC ranges. The main limitation is the inability of the rectifier(s) in the simple, non-amplifying probes to give a linear one-for-one RF to DC voltage for low level signals. Although there is also some voltage difference across a rectifier, it really shows up when you are trying to measure less than about 1/4 volt. Nevertheless, a correction table or graph can be prepared to give correct voltage indications to a fairly high degree of accuracy. The other thing is that the absolute voltage reading's value usually doesn't make a difference in ordinary vintage radio troubleshooting where the relative--and "ballpark" voltage--is typically all that's needed anyway.

It's true that vacuum tube voltmeters can read AC into the radio frequency range, and I get reminded that almost every time I post something about using or making RF probes for radio work, usually by someone who has never actually tried it. The plain probes going to the rectifier inside the meter puts too much load on most radio frequency circuits in radio receivers to be of much practical value. It might work for checking voltage across a 50 ohm transmitter load, however. Most DMMs drop off about 50 kHz or far less. An RF probe can be used with an ordinary VOM as well, but the meter loads the circuit too much for good sensitivity unless the measured circuit impedance is low and the voltage is relatively high.
The elements of the "simple" RMS indicating RF probe schematic that I use (a homemade job) is shown below. For television work, a peak to peak indicating RF probe is more useful, but that is not what I work on.

The other day I noticed that one of my "All American Five Tube" radios had begun to receive very weakly...and only one local station...when it was fine when I cleaned it up, recapped it, and put it into regular use a few weeks ago. As it turned out, the IF tube had partly failed and lost most of its gain. I don't know why it failed, internally, but it did. That got me thinking that finding a weak stage can be more difficult than finding a dead stage. Trying different tubes, if you have good spares on hand, is pretty easy but if it had turned out to be another component--perhaps a high resistance corroded joint inside of an IF transformer can or a partially failed coupling capacitor, etc., etc., can take a long time to find unless you can first find the radio stage that is causing the trouble.

I decided to establish a baseline test with my signal generator (an old Heathkit SG-8 ) and an RF probe as above with the assumption that most of these AA5 radios that use the same tube types are pretty similar in operating voltages and signal levels. I made some notes and wanted to post this in case it might help someone--especially a novice--be able to guestimate normal operational gain by signal levels in the various stages. There has to be some idea of "normal" for there to be a comparison with abnormal for troubleshooting purposes.
Now there is more than one way to do this, and different 5 tube radios will have different signal voltages to some degree, but I hope my measurements may be useful for helping to find the arbitrarily "weak" stage in a common vintage tube radio by injecting a known signal into the front end and probing key points for signal levels. Below is the setup that I used and the readings obtained. 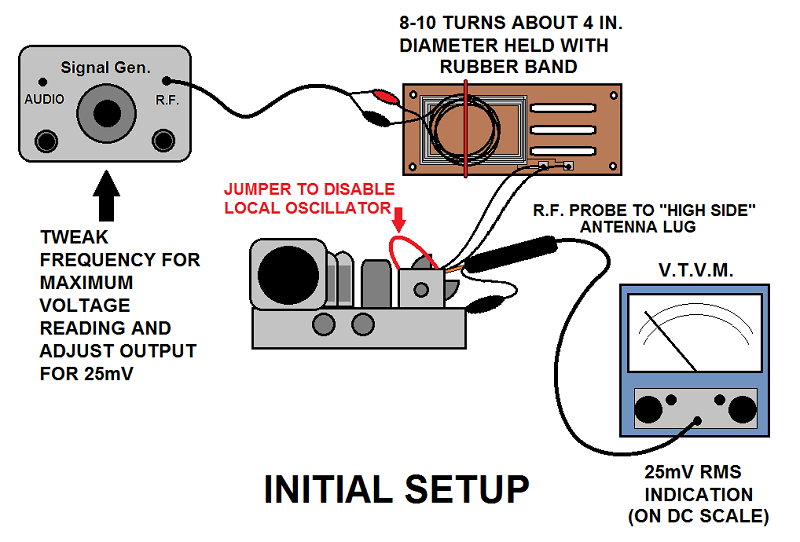 The setup is pretty self explanatory, I think, as long as you use all safety precautions and consult the radio's schematic as needed.

I start by disabling the local oscillator with a jumper across the oscillator section of the tuning capacitor because the oscillator voltage is usually quite strong--several volts or more--and tends to drown out the measurements I want to make. I put my coupling loop over the radio's loop antenna and set the radio tuner to somewhere about mid scale--about 1 MHz or so. The generator is tuned to the same frequency by measuring the voltage peaking at the ungrounded "high side" of the antenna lug either at the tuning capacitor or the loop terminal on the rear panel. I set the generator tuning and output to get right about 25mV on the VTVM's DC scale. This is not really a 25mV RMS input of RF voltage because of the error in reading small voltages without use of a known correction factor, but this level indication on the VTVM seems to give a good signal and usually does not cause the radio's AGC to kick in too much and mess with the stage gains. My VTVM has a 0.5 volt DC full scale setting.  If the VTVM being used has only a 1.5 volt DC range as the lowest, this is typically about one and a half of the smallest scale divisions.

I like to use 1 MHz or so, instead of injecting the IF frequency at the front end as is often done. Both ways work, but having the radio tuning circuit at resonance helps me to set the input voltage. If a 455kHz  I.F. is injected, the antenna loop/tuning capacitor pair is not being tested and most of the injected signal goes through it to ground, making the generator setting needing to be relatively high.

I leave the local oscillator disabled only until I finish reading the basic (relative) signal gain of the convertor stage. Once I am ready to measure anything on the speaker side of the first I.F. transformer, I enable the oscillator by pulling off the jumper.
I show my signal voltages measured below. Note that the generator tuning is tweaked for maximum voltage readings, as needed, on the DC meter scales on every R.F. measurement. Remember that these voltages do not necessarily reflect actual theoretical stage gains or unloaded voltages to any great degree of accuracy due to a certain amount of circuit loading, but are actual voltages measured with the stated equipment that might be useful as a comparison point for measurements with similar test equipment on similar radios, but there will be varations. The pin numbers are the ones used in the particular radio that I worked with here. The pin numbers may be different in some cases, even with the same tube numbers. Consult your schematic.

Now the generator was disconnected and the antenna coupling loop was removed from the radio's antenna. A 0.001uF, 630 volt capacitor was temporarily soldered to pin 1 (grid) of the 12AV6 tube.
The R.F. probe was switched out for the regular V.T.V.M. probe for measuring AC voltages.
An audio signal was injected into the capacitor to the 12AV6 grid and set to 0.6V RMS to match the detector anode's output level.

I hope this info is useful to some troubleshooter sometime.

Re: RF probe for finding a weak 5 tube radio stage?

..Not sure if that 50C5 output can be right, considering the B+ supply is only 130V on this unit, but that's what the meter said. Maybe the primary of the audio transformer was resonating? Anyway, it should be a pretty stout voltage with that much input signal.