I am trying to restring the tuner on my Hallicrafters SX-110.  There are three little metal knobs, with what appears to be Allen-headed set screws that need to come off, to remove the front of the dial, to allow access to that dial string.  I have tried $500 worth of Allen wrenches, both SAE and metric, and none of them seems to fit.  I read an article awhile back where somebody sawed the three shafts in question in two, then  sleeved them back together after they restrung the dial.  Why Hallicrafters dial strings are so prone to failure, and why they have to be so hard to replace, is a subject for another thread.  I got the plastic knobs off just fine, but those three little metal ones are being difficult.  Thanks for any help you can provide.

not sure what to tell you about those set screws but here is a manual I found with stinging instructions;
Halicrafters SX-110

I surely do appreciate having that service information. I will print that out. Thank you.

I'll take another stab at those Allen screws. There has to be a wrench in my collection that will fit. One of these knobs is missing, and, if I ever get the remaining two off, they will be missing as well. I'll put something else on there. I fixed a small spot of mouse pee damage. This thing looks pretty straightforward otherwise. It is full of black beauty caps that all need to go. Thanks again, MR MEZ..

I have tapped a small (jewelers) screwdriver into those type set screws and got it to turn and remove them.

Those may be bristol fasteners, or spline drives. They predate but are similar to the torx fastener. They were used on some knobs on military equipment I worked with.

Good find, I guess I'll need to get some.

If I remember correctly, they look like a revolver cylinder with the center milled out with semicircular surfaces around the center. Just different enough from torx to be a problem child without the proper tool. One note of caution, The fasteners have been in a long time and fine bristol wrenches will twist like bobby pins.

Sounds like time to fire up the drill press. This is a radio, for pity's sake, not a P-51. Wonder could I monkey in a Torx? I sure hate to have to buy tools just to take off a couple knobs. Thanks for the input, guys. I may see if I can work on the engine with the hood closed.

Find a torx or straight blade which is close, then tap it in and remove the set screw. Is that the only place on a Halicrafters that uses Bristol fasteners?

usually only on knobs. If you work with a variety of equipment made between 1945 and 65 you will see them used. I would offer some advice on how to remove them without the wrenches, but it would be only predicting a coin toss.

I wonder if a very small "easy out" would work?

I sure learned something this time.  The plastic knobs have the normal Allen set screws.  They came right off, no problem.  The plastic knobs appear to be location specific.  It might pose a problem if they were mixed up for some reason.  The three small, metal knobs on the antenna trimmer, crystal phasing, and standby switches have those different set screws.  The chassis of this radio was out of the cabinet when I found it.  I would surmise that the man who passed was making an attempt to restring the dial, perhaps one of his final projects.  The knob for the standby switch is not there.  I have three small, gray plastic knobs with traditional Allen set screws that I am going to install, once I get these things off.  Do you guys remember the Whitworth fasteners on earlier Rolls Royce, Bentley and other English cars?  I hired a guy once to work on JAG-YOU-AHH motorcars, and he had a complete set of Whitworth wrenches.  He guarded them like Fort Knox.

I have squirted the set screws in question with PB Blaster. I am going to try Torx bits first, since I have a drawer full of those. If I mess up a bit driving it in, no problem. I'll "give that a go" and see what happens.

MR MEZ, that manual you linked is excellent.  Very informative.  EXACTLY what I needed.  Thank you so much.

There is a go to recipe for penetrating oil that is given over and over for small screws in firearms. It is peppermint oil straight, or blended with transmission fluid. The torx bits may work, but the points will be longer than the bristols.

This is the patient. The pic was taken while I was in the process of unloading everything. It is considerably cleaner now. 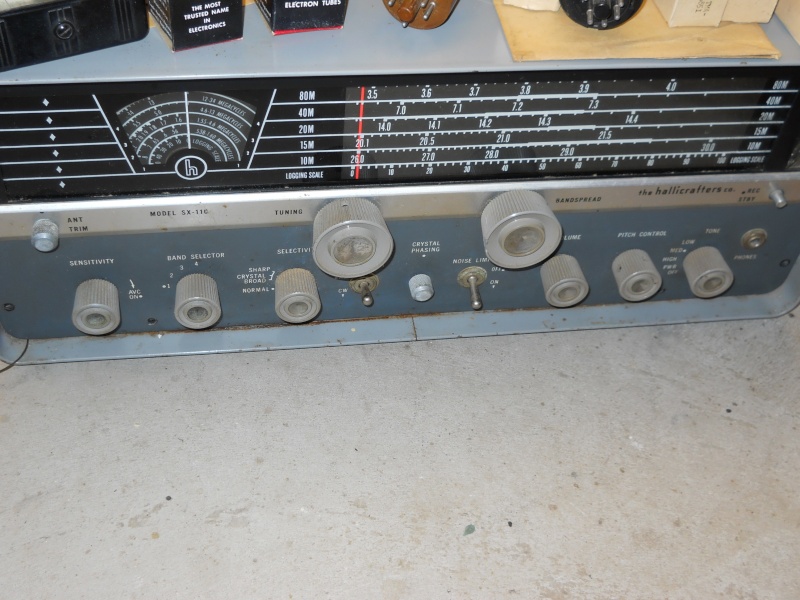 My S-107 is of that vintage. Those units are star performers!

What vintage would you say that it is? I guessed early 1950's, but I would not swear to that.

I would have also thought early 50's due to the octal tubes.

Thanks, MR MEZ. That was my thinking exactly.

Wonder if NAPA would sell bristol wrenches, or do I need to get them off ebay? Most sets are about $20, so maybe I'd just best get the right stuff to do the job and be done with it. My being cheap could make a simple project more hassle than it needs to be.

Just do a search on Ebay for "bristol wrenches" There may be less pricey sets.

I got the crystal phasing knob to come off, using a torx bit that I drove in with a hammer. The shaft on the antenna trimmer is made in two pieces. I took that shaft apart, and was able to remove the front panel. Be careful with the paint on the dial on these things. Water will remove the markings. Don't ask me how I know this. Fortunately, mine was not mint, and they are repopped. Now mine gets a new dial.

I managed to change the handful of bumblebee and black beauty caps in this beast. There is plenty of room to work. I restrung the dial, correct the first time. I read somewhere about the secret of using quick drying cement to keep your dial string knots from coming apart. That really helps. There are still six .033 coupling caps that I need to change. I ran out of that value, so it is on my capacitor order. Ditto on the 30 uf filter cap. I am going to restuff the can. I tested the external speaker, and it appears to be okay. The wire was all hacked, so I cleaned that up a bit. All the tubes are branded Hallicrafters, and they all check good. I'm waiting on my capacitor order before I can proceed any further.

75X11 wrote:Those may be bristol fasteners, or spline drives.  They predate but are similar to the torx fastener.  They were used on some knobs on military equipment I worked with.

I know this is an old thread but I just have to say I found a set at the farm house yesterday while cleaning out the place. I had ordered a set just 3 weeks ago!

I thought I was the only one that had such luck.

Mr Mez has a set he does not need, and I need a set that I do not have.

I'm keeping a set at each shop, but if I find any more I will ship you an early Christmas present!