After working on old radios for over 35 years I have finally made a jig to hold a chassis. I had saved photos and plans for the last few years. I ran across this one online.

I used this for a basis of mine but due to it not being just right for what I wanted I didn't follow it for measurements. I came up with this. 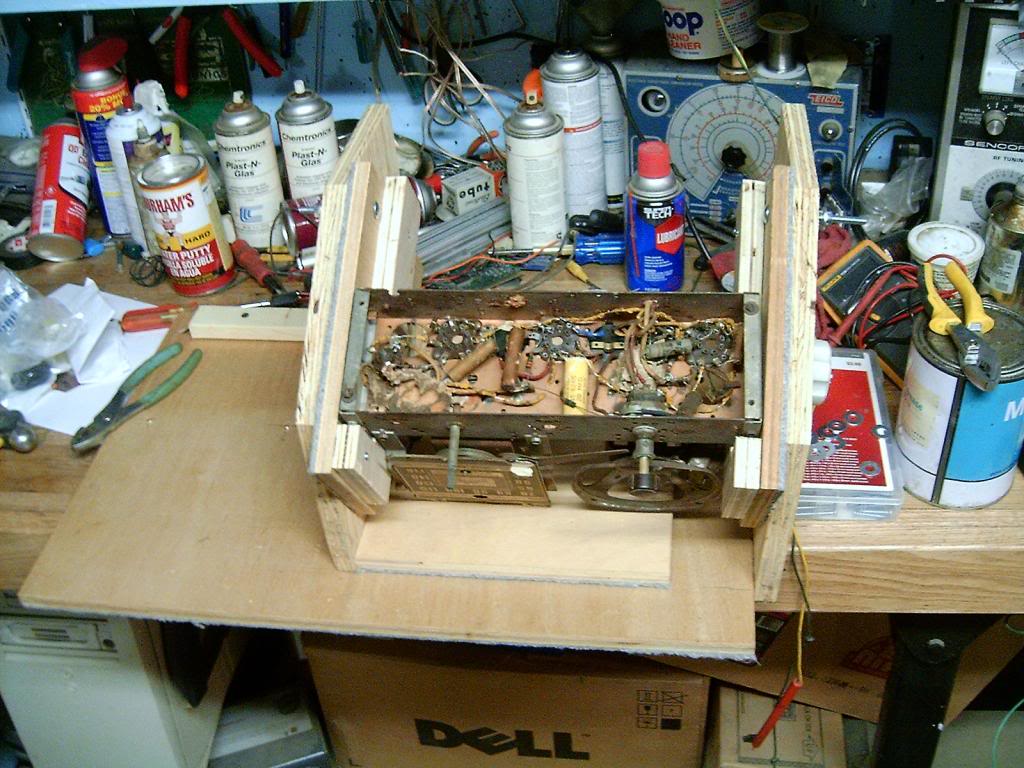 In the photo above you can see the base is roughly about 24 wide by 16 inches. I then made a second smaller base piece that slides across the larger piece that is roughly 12x12. This piece slides across the bottom piece and it keeps its place with the board across the back. That piece was a scrap 3/4 inch by 1 1/2 that went almost all the way across. To be able to clamp it down I drilled 3 holes with T nuts inserted into the bottom. Being a scavenger I had saved some old knobs from the recycler.

Here is a picture of it without the radio on it. 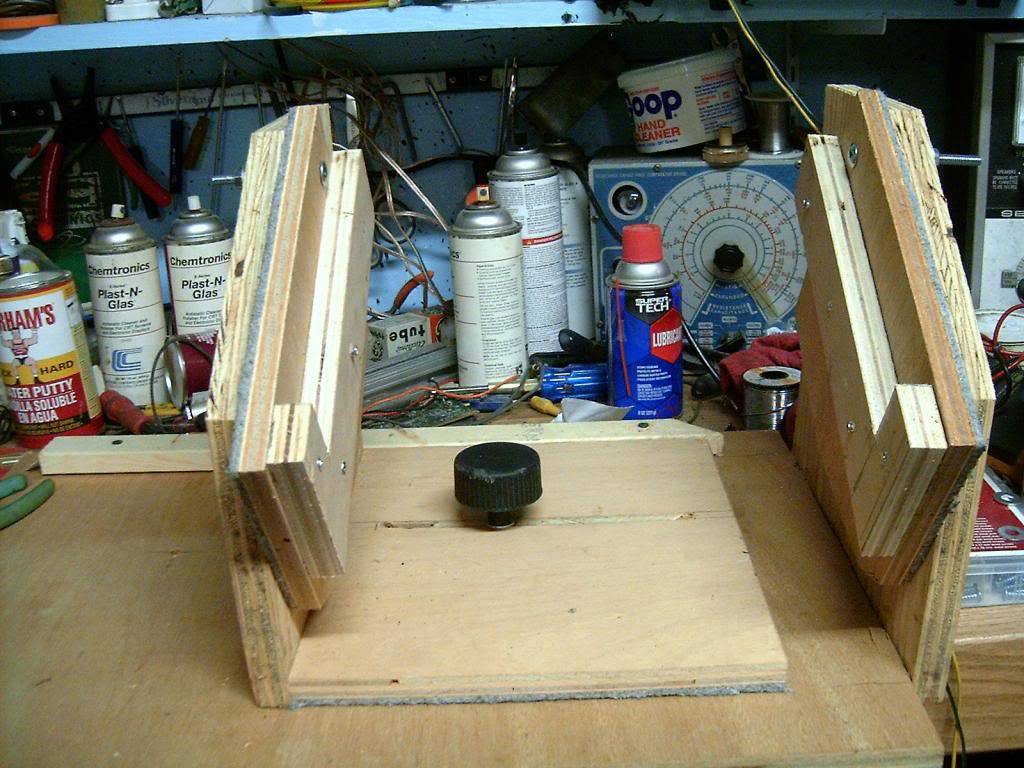 You can see the board in the back I use as a rail to keep it aligned. Then the knob in the middle is a salvaged knob that has a bolt in it. The smaller board I drilled two holes at the same height on the board. I then drew a line from each side of the holes to the other hole. I then cut that area out to make a channel the board could slide across the other board with the knob in place but loose. I put 3 T nuts on the main board so I could adjust the width from about 10 to 30 inches. All you have to do is move it over to the next T nut.
With that part done I then went on to the sides. I cut out a couple of boards for the sides. I think the main one was 12x10. I just made this as I went along. All the wood I used were scrap pieces so it just came together.  The main one was on the big board. Due to the smaller board being on top I had to make its board shorter by the height of the main board. What I did was to mount the first boards side on then I took the second board and laid it side to side with the one I just put on. I then traced the other boards top across it. I just cut on that line. Then it was level.

The next step was to make the radio holders for each side.
This is a side view. 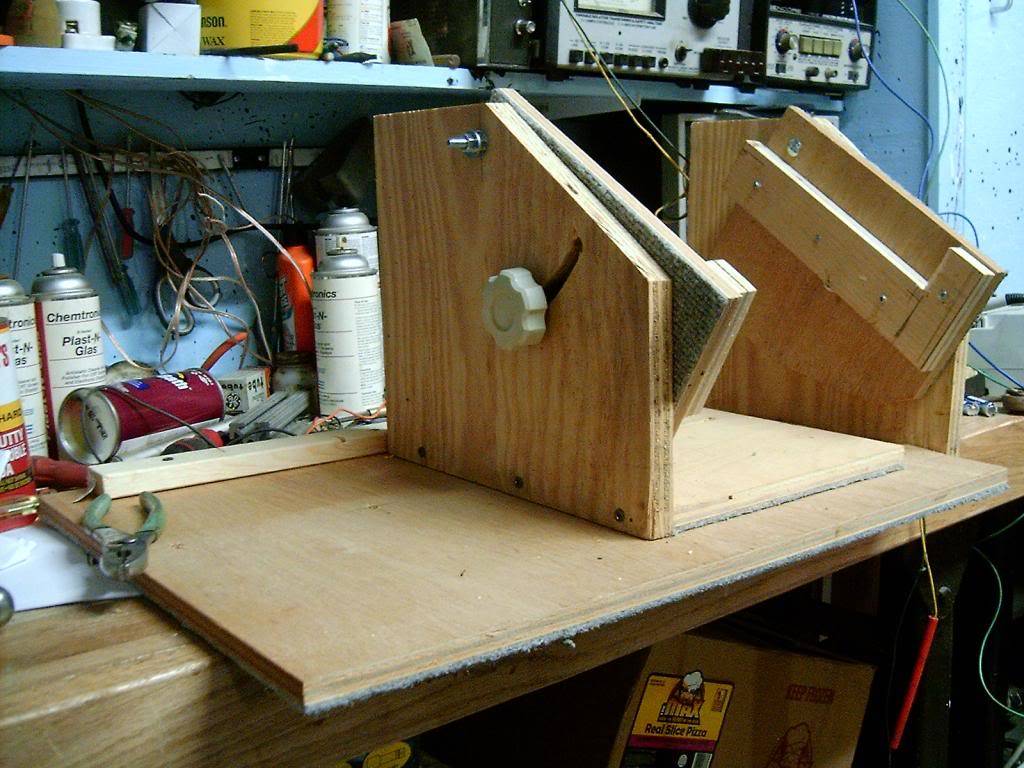 What I did was to make a board roughly 6x8 for each side. I drilled a hole on the main jig parts already made 1 inch from the top and then 1 inch on the new pieces and 1 inch in. I put a carriage bolt in and put two nuts on it. I used this for a pivot. I then drilled a hole where I though I would want my knob to go on each side. I put a pencil into the hole and marked the top and bottom of where I wanted it to go. I then used a drill bit the size of the knob bolt on each end and then used a jig saw to cut out that curve.  I then used two more T nuts on the new pieces that didn't have the curved cut to hold the beige knobs that has a threaded knob in it. I then cut two new pieces shaped like a "L" and screwed these on to hold the chassis.  The last thing I did at this point was to cut the sides that are mounted to the boards on the bottom to a angle. You can see this cut on the board with the curved cut in it. The reason for this angle cut is I expect to use it on a angle most of the time. It was cut mainly to be able to get in the sides easier. I also noticed the inside part that moves up and down did not go all the way to the bottom of the curved cutout for the knob. This was due to it being square. So I just cut it a few times freehand to the angle I thought would work.

If I want to work on it in a flush position I just loosen the side knobs and make it flush. You can see it in this position here. 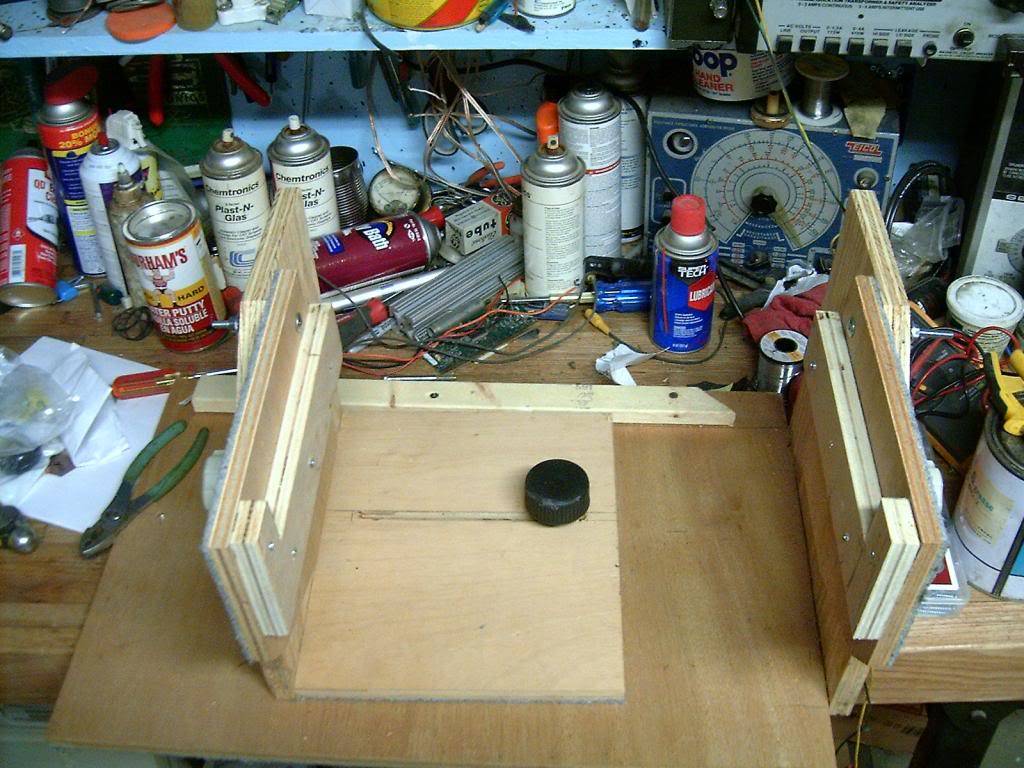 I am almost finished. I ran out of time today what the last thing I want to do is to make a board roughly 2x4 and then add another board roughly 3 inches wide on the bottom of that and then add a 1x1 on that board. So that when you look at the side of it the boards when put together look like a fishhook. The reason is I want to put this under the main board then drill holes through the main 2x5 and main board. I plan to put two carriage bolts from the top and I bought some knobs to tighten all that together. The reason is that "j" fish hook looking piece will clamp over the lip of my workbench and stay put. When I make this I will post those as well.

That was my project for this weekend. It wasn't a bad little project. I have seen fancier ones but I like the simplistic design of this one. It was also a fairly cheap project as well. I had some furniture grade plywood that had carpet on one side. This works out well with this project as it protects the workbench. I had a few bolts and these knobs. I spent about 15 bucks on the carriage bolts,nuts,washers,t nuts and a couple of knobs for the bottom of the base. So it was a good day in the shop. I have about 2 or 3 hours in it so far and the last piece shouldn't take over 30 minutes to make.

Looks like a great idea. Keep us updated on any improvements!

Nice job, Willy. My birthday is coming up, you know.

Looks good and maybe a business prospect there? The only addition I could think of (maybe not practical?) is a lazy susan base for turning? Regardless, what you did is far beyond what I do...nice!

Nice! thanks for sharing with all of us!

As far as making one give it a try. It was a simple project and if all you had was a hand drill and jig saw you could still do it. A table saw and drill press makes it a lot simpler. If I can do it anyone can. Give it a try. Most of the stuff I make out of wood I have no measurements to begin with. I just get a photo then make it from that. As far as the amp cradle I based it on I just used the drawing of the completed one to get an idea on how I wanted it to be.

I mentioned that because a person on my pyrography forum (wood burning) made an easel to change the direction of the burnings she did. People liked it and the next thing she was selling them. Might not work with the old radio people because they are handy with tools and could just make one themselves. Of course you could always sell the plans.

Regardless, you have a nice fixture there!

If I could make them and turn a decent profit at the radio meet in Nashville I might. Only problem is after I made some I might not sell many more. Its not a large group and the only one I have been too.

When is the meet in Nashville?

April the 12th. Are you going?? Let me know and I will try to be there when you are. Here is more info.
http://www.musiccityvintageradio.org/

Thanks for the link, I'll let you know if I decide to go.

Excellent jig! There is nothing like an extra set of hands holding the work!

OK folks I made some measurements.
The main bottom was 24 wide x 16 deep
The T nuts on that board are 9,16,22 1/2 starting from the right hand side.
They are 9 inches from the front.

The piece that sits on this that make the second part of the bottom is 10 inches wide and 12 inches deep.

The last piece was 10 inches deep by 7 1/2 high. I didn't get the measurement of the hole the t nut for the knob would go but I think it was probably around 4 inches out. The piece I added I cut down a inch and left a inch on the bottom to keep it sliding out. I also cut the sides and the pivot board at angles to make it easier to work on. I cut where it looked like it needed to be cut.

I wonder if there should be a thread here or a re-labeling of an existing one, to include projects like yours. I know QST (Ham Radio Magazine) has a "Hints and Kinks" page with useful tips.

You have a nice idea and I'm sure there are other projects/ideas/helps out there.

N7ZAL wrote:I wonder if there should be a thread here or a re-labeling of an existing one, to include projects like yours. I know QST (Ham Radio Magazine) has a "Hints and Kinks" page with useful tips.

You have a nice idea and I'm sure there are other projects/ideas/helps out there.

Wouldn't be a bad idea at all. It would be up to Bill and the other mods I would guess. When I go to the other forum I go to the hints section,old radio shows and classifieds.  The reason I posted this was to help others on radios. I am not too much on problems as I am trying to get my skills up again but On stuff like this I hope my posts are helpful. Thats why I posted on making a knob puller as well.