I have a fellow I fix amps for. He will bring me junk radios and other stuff to knock the cost down. It usually winds up I get my parts cost and that it, but thats fine because he finds me some interesting pieces. Anyway the last time he brought me a few old cabinets minus the radios, a radio minus the speaker, a tape player, a few old record players and this Philco 70 cathedral . I just asked for the parts cost as I really wanted the cathedral. It was a true basket case due to the bad condition. Here are photos of the before condition. 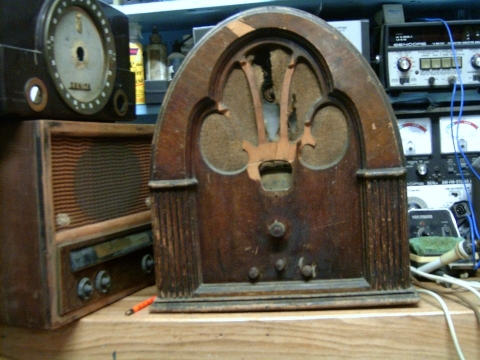 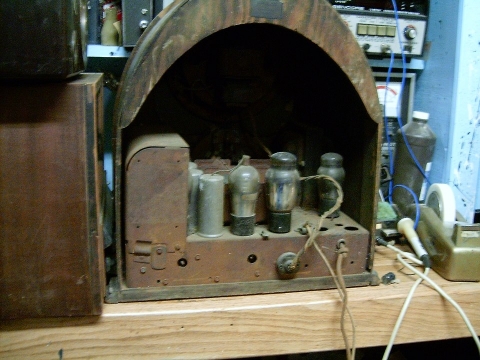 To give you the extent of rust here is a picture of the chassis out of the case just before cleaning. 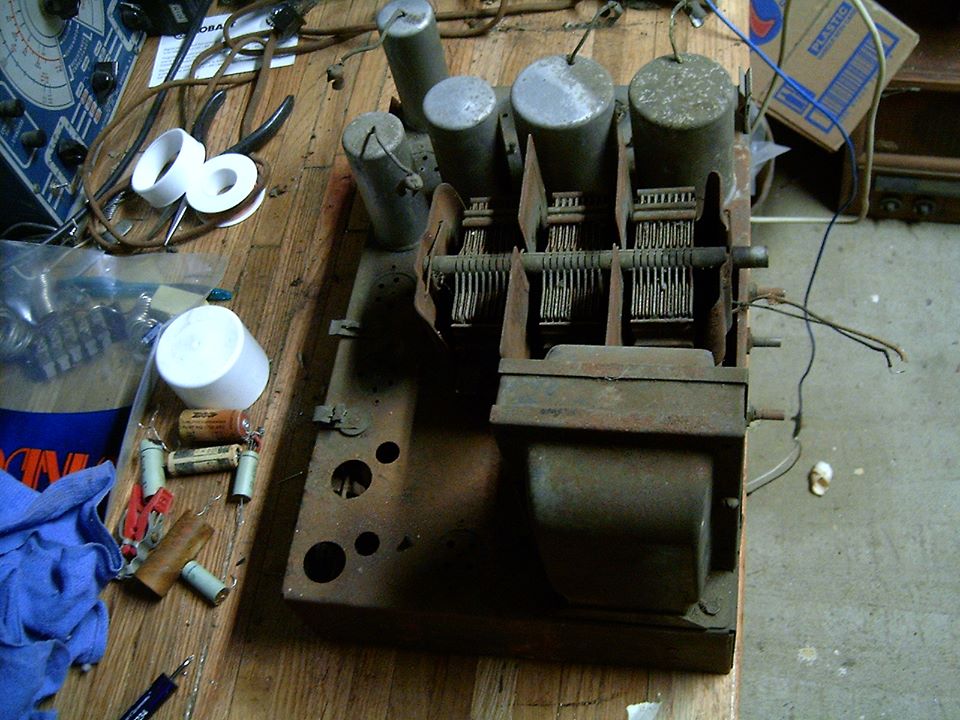 This was going a major repair to get it going if it would even work. I first took the chassis apart the best I could. I took the tubes off and also took the tuner off. I then cleaned the aluminum coil covers and taped them up. I also taped the tube sockets. With nothing to loose I sandblasted the chassis the best I could. I had it taped up in areas to protect wires. I mainly sandblasted the open areas where I knew it wouldn't hurt. I had some sand that is extremely fine, almost like dust. I then blew it out with air. I took it and taped up the chassis and painted just the transformer. I then let that dry and taped the transformer. I painted the chassis with chrome spray. I didn't think to take a picture of it but I did get one in it when I was dry fitting the chassis. 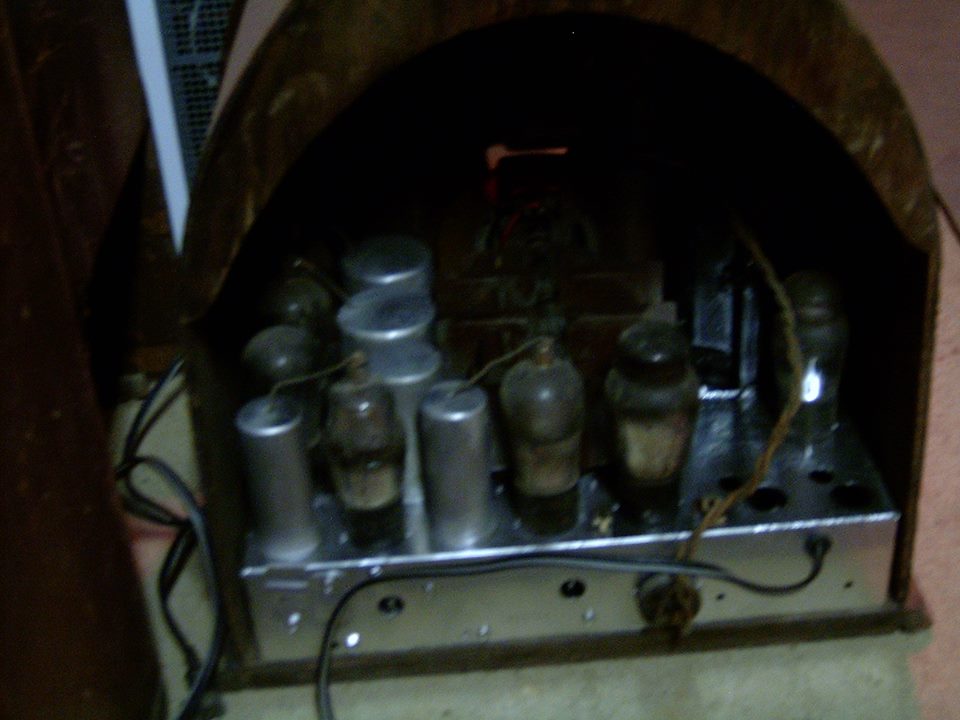 To repair the radio I replaced the caps and tested all tubes. I replaced a couple that were bad. I also had to replace a wirewound resistor as part was bad. I found resistors of the right resistance so I just soldered them on the original pins of the resistor after I had removed what was left of the old windings. On the tuning cap the bushings were dry rotted so I improvised with some grommets that were made similar and the same height. I rebolted it in and replaced the original wires. I also had to replace the wires out of the coils to the tubes. With all this done I then tried it out on my varible power supply. To my surprise it worked good. I was surprised at how it worked. But my surprise was short lived for the moment. The next time I plugged it in the radio smoked and one of the caps blew. I was ready to toss it but then I gave it one more try. I found a cap that was a add on later in production that wasn't on the schematic I had. I had overlooked it as it was under a transformer the best I remember. I was able to get it going and it has played every since. Here is a video of it playing.


With the radio working and out of the way it was time to start on the case. I was going to just patch and add veneer to the front but there was so much missing I thought I would just make a new piece. I lucked up as the front was not glued in but was screwed in. There was one side of the speaker area that had all the bottom veneer while the other had half missing. So I just laid out the piece on a file folder and traced what was left. I then trimmed out the area that was complete and folder over the other side. I lined it up with what was there and traced the rest of it out. I then trimmed out the entire area. I then found a piece of plywood similar to the construction of the original piece that had a grain I liked. I then laid the original piece on top of it and traced out all holes and the speaker area that was still on the original . I then took the original piece off the replacement and lined up the pattern I made with a file folder and traced that out. I then cut the speaker area out with a scroll saw and drilled the holes that it needed. I had to sand some of the back off as it was too thick. I got it to a thickness I could work with.  Here are the two side by side. 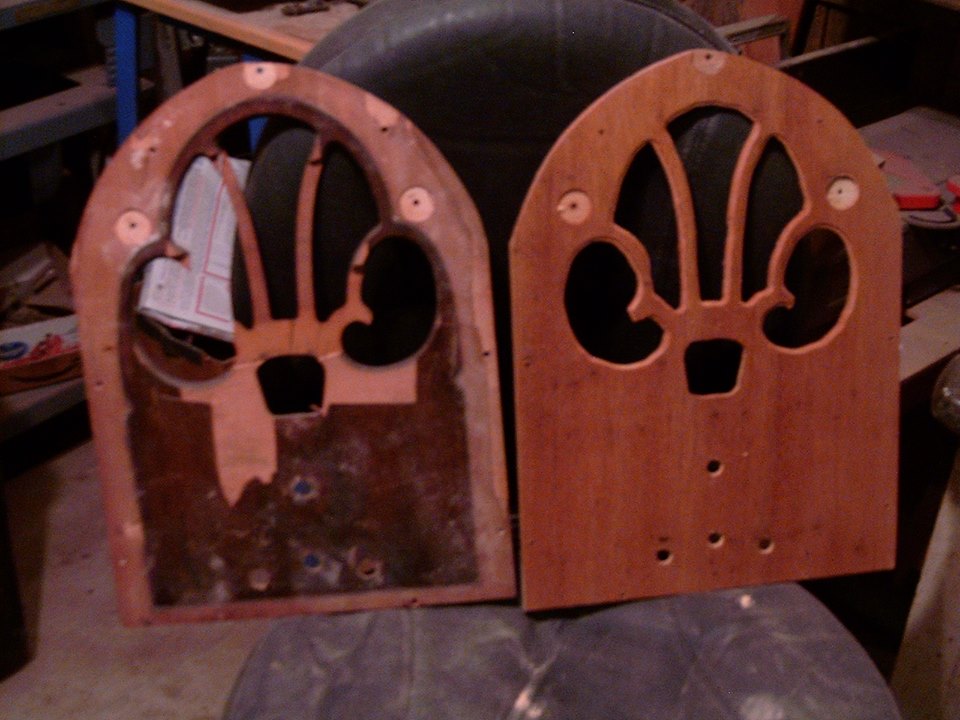 Here is the case with the new piece I made. I was able to use some of the front veneer to patch the case that still was going to use. 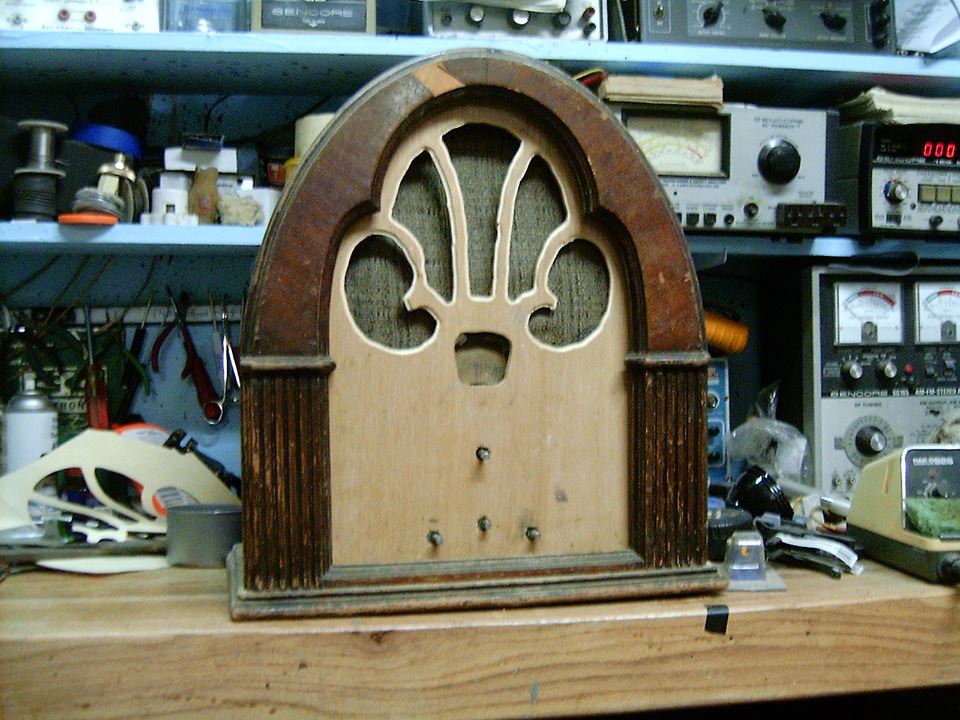 I then patched the case and glued up what needed to be reglued. I also removed the old finish on the original case. I then applied and toyed with stain 3 times until I had a color I wanted on the new piece. After I was satisfied with the stain I applied finish 4 or 5 times and wet sanded the case between each coat. I was able to get it like this. 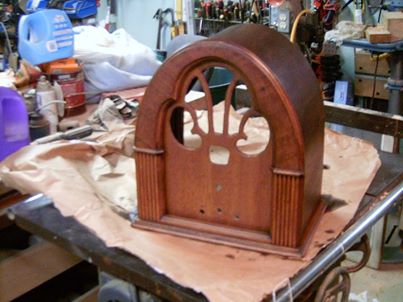 After the finish was done I put the radio back in and bolted it together. I used brass screws to attach the dial cover. I had got the cover from radiopup at the Nashville meet. It was missing on the original.  I know its not quite original with the replacement dial cover and brass screws over nails but considering the shape it was in I really like it. The photos don't do it justice over what it looked like. The last photo looks bad on some of it like it had lust or water but that is just from the photo. The radio case is slick as glass. I am well pleased for one in the shape it was in. Here it is finished. 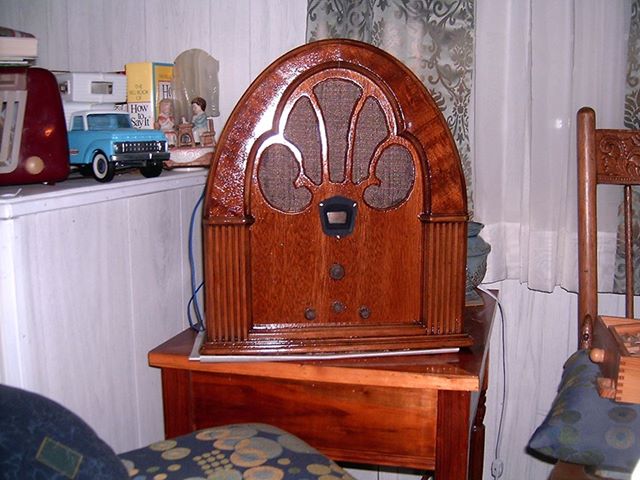 I have a mint Philco 70 and also a model 20 and another 70 that needs the same work done to the cabinets as you did to yours. Nice job!

Wow, you are quite the artisan!

What wood did you use for the project?

Seems like plywood I find is crap, let alone has a decent "grain" or even worth of a radio front.

Dr. Radio wrote:Wow, you are quite the artisan!

What wood did you use for the project?

Seems like plywood I find is crap, let alone has a decent "grain" or even worth of a radio front.

Lowes has small pieces with a birch veneer on one side.

Thanks for the positive replies. As far as what kind of plywood it is I don't know. It was scrap from a custom made cabinet. The old cabinet was going to be tossed and I saved them. The picture above where I showed it in the cabinet and it is light colored is the original color with no stain or varnish. If I find something like metal,wood or whatever that is big enough to reuse I will save it.

Lowes has small pieces with a birch veneer on one side.

Thank you, that is excellent info to know.