Is there a practical way to repair veneer that has dried out and split? Would wood filler of some kind work to fill the cracks, then be stained to make the repair somewhat transparent? I don't want to put new veneer on this spot. It is on the front of the cabinet. I am not interest in "purist" quality work, just a repair that will be presentable. Thanks.

I take like wood and color veneer from junk radios and fill in the spots. Got a picture?

Usually when the wood is split, it is also lifting from the base.
If that happened, you can inject glue into the cack , then clamp.
Once the lifting (if any) has been repaired, you can use grain filler tinted to the same color as the wood. That will fill in the crack void itself. You will need to lightly sand off any excess above the filled area.
Now, I assume you are doing a relacquering of the area too. If you are down to bare wood, use the grain filler again over the entire front panel. Lightly sand off the excess.
Now resume your refinishing, with stains, toners, whatever. You might see the areas where the cracks were, but if the color is close, it miight be minimized.
Good luck!

Thanks, Gary. That sounds like a better plan than I had. I will give grain filler a shot and keep you guys informed. I appreciate your input on this.

All your processes will work fine but a couple of additional points.  A lot of the reason that the veneer splits especially on the rounded corners of some cabinets is that it was glued to the substrate with hide glue.  Hide glue is water soluble and if the cabinet was stored in a damp or wet environment the corners are usually the first to go because that is where the most strain is.  To repair, inject/force glue under the lifted veneer.  Brush it in or blow it in with compressed air,  all the way to the back of the lifted veneer.  I use Titebond II, but any yellow glue will work.  I like Titebond II because it is water resistant (not water proof) and remains a little flexible. Then a layer of waxed paper, 1/4" or thicker felt padding, a block of wood, and clamp.  On flat surfaces any clamp will do.  On curved surfaces forget the block of wood and use a tie down strap.  I use 3" wide straps wrapped all the way around the cabinet, tighten appling pressure to the felt padding.  Fill and finish as desired. 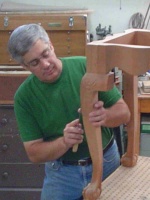 Thanks, Al. The project I was working on was a Crosley 170. The radio was a survivor of 50 years in a chicken house and the cabinet was in pretty tough shape. All the veneer on the outside of the cabinet was long gone and the veneer on the front was what I was asking about. There are basically two different veneers used on the front. The lower part had the grain running in an inverted "V" shape and the top was grained like the rounded outside of the cabinet. The veneer on the top front of the arch was dried and split. Like you suggested, I glued everything that was loose, but I used Elmer's. (I never thought about Titebond, and I have some!) I injected it with glue, then covered with wax paper, a chunk of 2x12 and then clamped. After I got the veneer stabilized, I put several wash coats of shellac on the front to use as grain filler, and to fill the bulk of the cracks remaining in the veneer. Then, I used wood filler, SPARINGLY, to fill what little cracks remained. Then I stained the areas with wood filler. I put several thin coats of semi-gloss poly on it. It turned out pretty well, but obviously not perfect. I have to remember that I rescued this old thing from a chicken house, not the Crosley museum. I appreciate your input, Al.

Sounds like you did good.  Are you aware of the wax issue with shellac as a base coat with something else over top?  Most shellac has wax in it unless it says de-waxed on the can or bag.  Be sure to seal the waxed coats with dewaxed before putting anything else over top, especially hard finishes.

I understand the chicken house problem.  My cabinetmaker's bench (about 200 years old) came out of a chicken coop and all the legs are short and not the same, it sits on blocks.  That chicken poop really does a job on wood.

My grandfather covered everything wood with shellac. I learned the "wash coat of shellac" trick in a book I read, author long forgotten. The shellac I have has been around for at least 40 years, maybe longer. It is in a two gallon glass jar, and looks like ground up pencil erasers. I mix it with denatured alcohol to make shellac. The wash coat is shellac thinned about 10 to 1 ratio or something to that effect. It is probably different each time, kinda like granny making biscuits. I slop it on to seal the wood and to keep the top coat from going wonky. Like sealer and primer when painting a car. I put it on with an old worn-out brush with the same care used when basting a turkey. I put on several wash coats of shellac, then block sand. I repeat as necessary until I get the effect I am looking for. I have had good results doing this. I had not heard about wax in shellac. Would that be the case with antique shellac? I use shellac to prevent a wax or silicone problem, and it has not failed me yet. I am in the process of refinishing an old cherry table from the 'teens, and it is finished in shellac. I used denatured alcohol and furniture refinisher, and it still is on there. I just sanded it smooth, and am going to shoot poly on it. That stuff is tough as nails. Can you shed more light on the wax in shellac? Thanks.

Sounds like your process for a wash coat is fine.  Shellac is a great finish, been around thousands of years.  French polishing is done with shellac.  It's great that you have those old shellac flakes.

Since you are mixing your own the best way to tell if there is wax in it is to let the mixture sit for a day or two after it is completely dissolved.  If there is a hazy white liquid on the top, that is the wax, the wax will float to the top.  To get rid of it just scoop it off and you have de-waxed shellac.

I have experienced the wax problems when using non-de-waxed shellac as a sealer.  On sharp inside corners and edges, the top coat will lift off the shellac if it was not de-waxed shellac.  I've also had some problems on just plain flat surfaces. Some guys say they have never had a problem so I think it has a lot to do with the kind of top coat you use.

I have never noticed anything floating on the top of my shellac.  I have not let it set for a couple of days, however.  I usually use it fairly immediately after I mix it up.  I only make enough for the job at hand, and never store mixed material.  Maybe I have been lucky? The Grunow 1191 in my avatar has a shellac undercoat under polyurethane, done close to twenty years ago.

When it's working, don't mess with it.