Hi Everyone,
I'm going to start a thread for your recent acquisitions; To start off with is this nice original Erla 271 tombstone/cathedral clock radio: 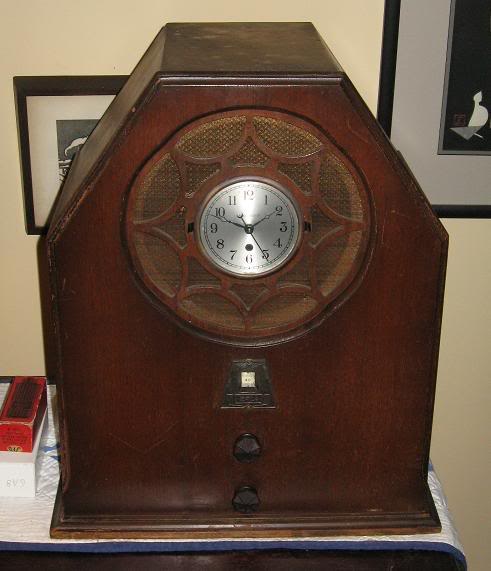 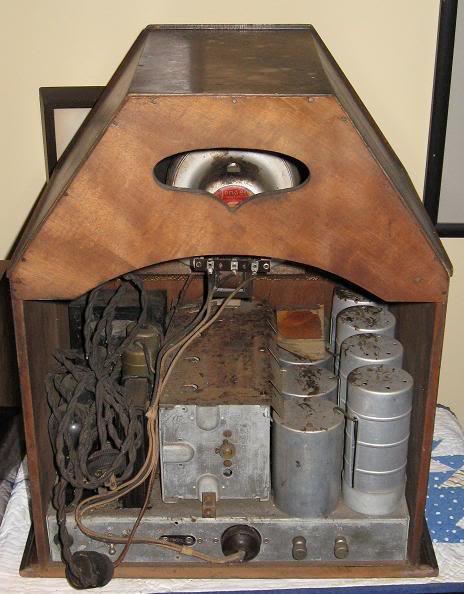 I picked this up back in February at a local auction for a little less than $300.00
Feel free to join in with what's new in your collections.
Thanks,
Larry

Not much new here... Just junk and busted aa5's wherever you look... shoved in corners, cars, cracks, and computers...

IS the clock there telechron or electrically wound?

Its an electric movement,
I think its made by Hammond

Cool... Does it still keep good time with all the vibration from the speake over the years?

No Idea,
I don't have it running, and I'm not even going to bother getting it into running condition. This is just a static display piece. There's no point in fixing it up unless you want to do a major amount of work. While the transfomer (original) may be still good, it won't last long. So right off the bat your either going to have to send it out to be re-wound, or get a total replacement. It's an open core design and mice have been crawling around it pissing and crapping on it, which I am sure hasn't helped any.

yes and their urine rusts the hell out of stuff to... It does look very nice though...

So wheres the pics of the hippo?

when I get it taken I will upload one

I always like the hippo, never could find one though 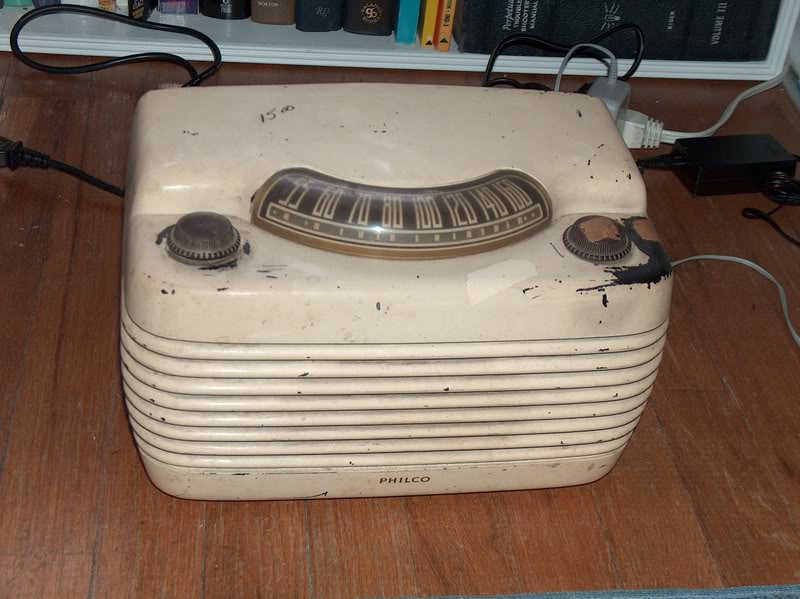 looks good... a bargain 4 15... Does it work? Didn't they moint the chassis upside down in thems?

some people have all the luck

My wife and I help with Irish Setter Rescue and transport critters all over when we can. Last month we took a couple of red dogs to Lincoln NE. While there we went to an antique store where I bought a trashed (I might try to save it anyway) Sentinel battery set for parts. 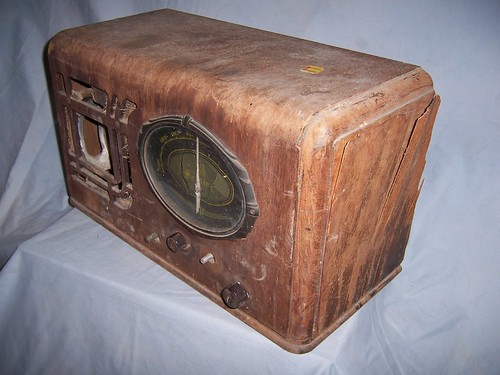 The clerk asked me if I knew much about old radio and if I'd mind checking out his three. We didn't have much going on so I said sure. While he was drawing a map to his place he said he'd sell them to me if I liked them - $25 each for the little ones and $35 for the big one. He and his roommate had just bought a large old house and were in the midst of restoring it, he didn't know anything about radios and the house was full of projects that took priority.
I wasn't expecting much and when I got there his roommate said he wanted them gone. When he showed them to me it was very hard not to let my jaw drop through their floor.

The "little ones" were a Philco 37-610 and a Silvertone 4575 with the original instruction sheet inside. The large radio was an Atwater Kent 55-C in a console made by the Starr Piano Company. 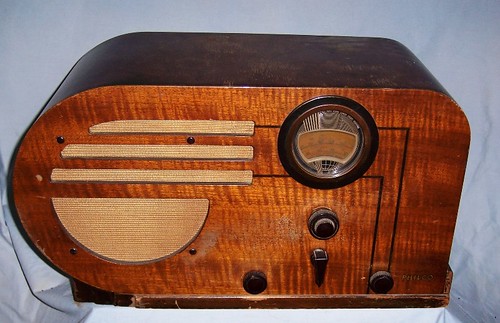 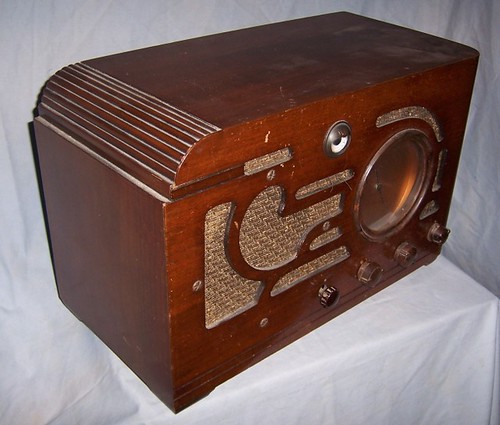 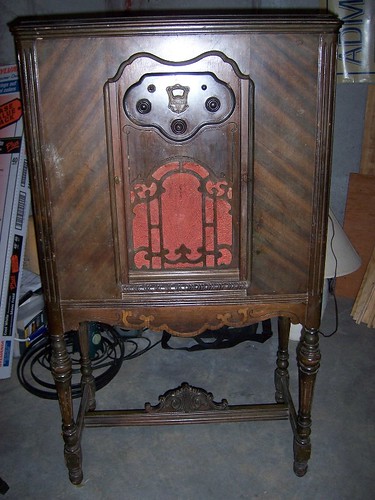 Of course I said I'd take them and got out the checkbook. The roommate said that as far as he was concerned he should be paying me to haul them away. They were just taking up floor space that would be better served with things they knew something about.

I didn't know whether to feel guilty for getting these so cheap or glad because I saved the couple. They cashed the check that had my name, address and phone number on it so they could have contacted me at any time.

These "little ones" and their big brother are in the best of care now and I hope to have them up and running as soon as I can find (and afford) the right tubes (45s) and rubber parts.

I guess I don't quite have that whole "getting the picture to show up" thing goin' on yet.

One more time before I move everything to the other picture link...

Where did I put that...
Member

Hi yesterday i picked up at Gladeville hamfest the following:National NC-57B ($40.00)Lafayette HB-115A cb rig all tube works,Eico 320 Sig. Gen works,Triplett 1200 meter needs battery and leads,Superior TV-50 Sig Gen works,got all that for $20.00 dollars! Got Superior TW-11 tube tester with manual nice wooden case like new in side for $40.00 dollars..Sprman : )

Sounds like a nice haul. Last week I picked up two Halli receivers from a local for $80 total.
A clean S-38B and a S-20R - both re-capped and working well. The S-20 has a nice history;
the seller's uncle had it in Alaska during WW2.

Hi cool.Back in june i got a Scott Allwave 23,and a R-274B/FRR SP-600 JX-6 Navy model.Just got a BC-454 to.Been working away on SP-600 JX-6recaped it fixed BFO.Now trying to fix the xtal phasing and get the double conversion working to.Sprman : )

I have visited those Scott chromies at Great Northern here in Mpls - works of art. Also a Hammer fan; so far a HQ-140X and SP-400X. I have been
lusting after the Halli version of the R-274 for some time, but when they appear they go way out of my price range. I think if you can re-do a SP-600
you can restore anything. Good luck.

Hi well i got 274b/frr going good on singel convertion .I am thinking i have some bad resistors in the IF chain.So its going to be a bit of work to replace them.I bet the set works great then. The audio sounds nice thru R-12 speaker Hallicrafters.Ya i have 2 SP-600s a JX -6 and a JX-17 Sprman : )

here is a radio that were given to me recently

Wow, I wish I could find some of those generous types around here.

Those radios must have legs and walked right in antiqueradiobuff's front door.