first off let me start by saying this forums rocks. been stalking them for a while now, finally figured it was time to join.. lol

ive been collecting and repairing tube radios for 10ish years now (im only 26..lol), but this is my first chance for a tv.
at any rate, i picked up a console tv a few days back, and can not seem to find much info on it.

its a stromberg carlson, and altho the chassis says "model 117", i cant seem to find any info on it. perhaps im just overlooking it??

a couple funny things about this set tho, the front says UHF right above the knobs, however its a VHF set.. the rear has a label that says you can use a UHF tuner on it once its approved by the fcc, which is thought was funny.

ill attach a couple pictures of it.. many thanks ahead of time.

with my luck the first reader of this post will identify it straight away.. lol 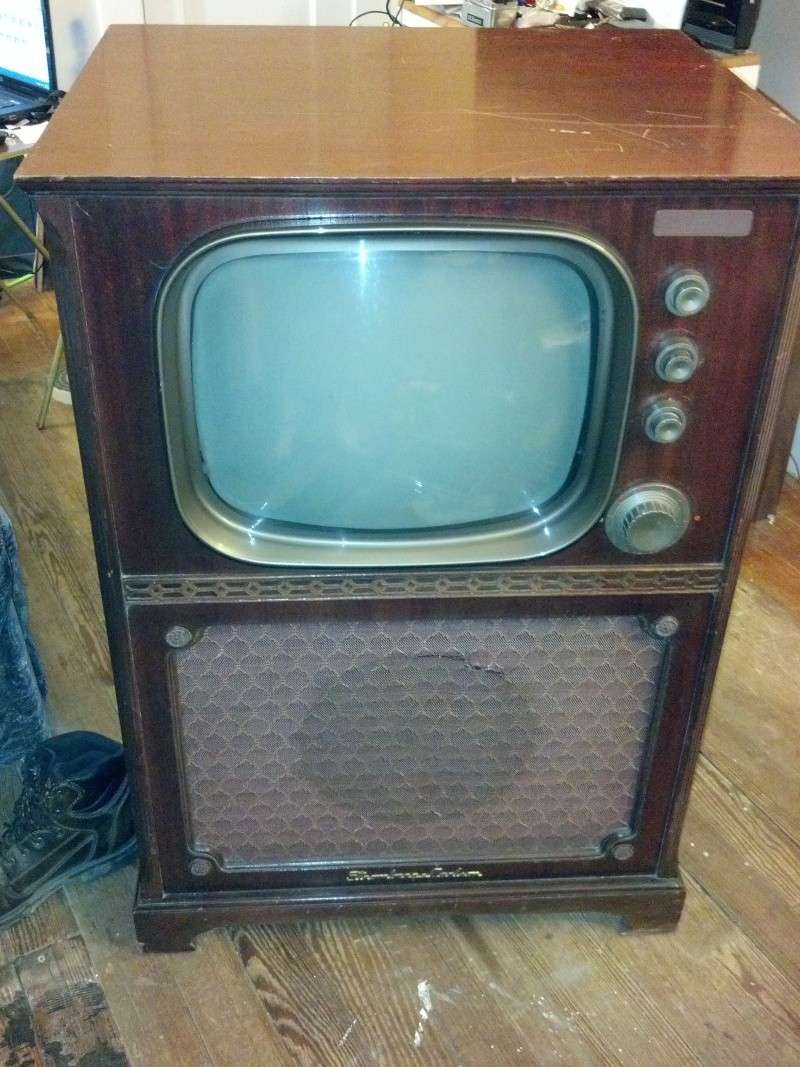 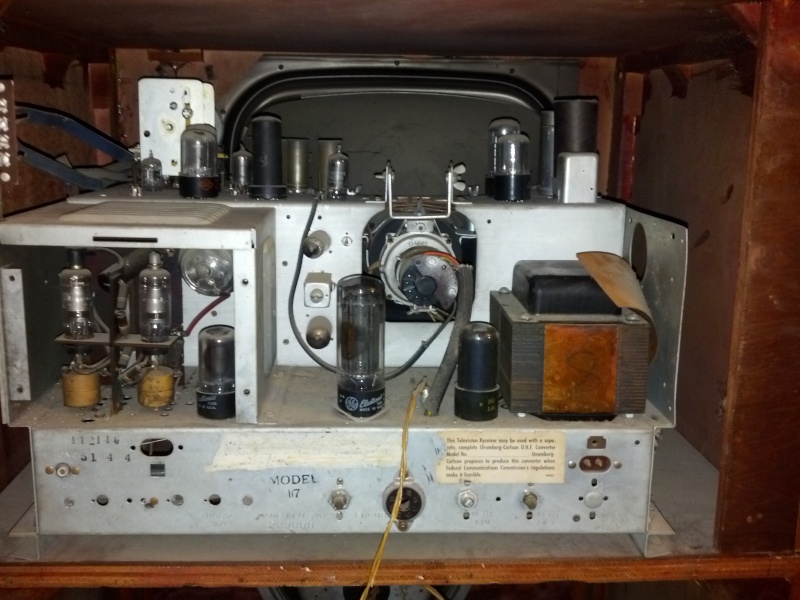 i hope i did that pic thing right.. /newbie

the bottom?? as in the bottom of the console?? stromberg carlson is all it says

Yes, the text at the front bottom. Thanks.

sorry, may have had a brain fart when i read your last post.. lol

I'm not a TV expert, but there are some on the forum. Usually pictures will help a lot, but suspect there is someone who will know based on what you posted. Year, etc.

ive always wanted a tube tv, but never found one for a decent price. couldnt pass this one up.

however ive got 50+ tube radios.. lol

Welcome. That is a 1951 Stromberg Carlson tv. It uses a 16RP4 picture tube. These sets are nice, but, a bear to work on.
First, they were prone to power transformer failure.
Next, this two tiered chassis is a bear to work on.
You will have to remove the picture tube to do most of the rebuilding.
Nice sets when finnished, but, a nightmare to work on.
I have the arlier 16" round metal tube version of this set, and, I'm in no hurry to work on it...

thank you very much!!

i will admit, this does seem like it will be quite a pain to work on, but worth it in the end (provided i dont fubar it all up)

now, i know i will get quite a bit of flack for this, but i actually did plug it in, and it does work. i gave it a pretty good look over to make sure nothing looked too terrible, and no obvious damage was evident. i went and tested the tubes also, which are all to my surprise within the acceptable range.

yes, i know how much of a terrible idea it is to try an older piece of equiptment.. so hate away.. lol ive got experience with tube radios, this is my first endeavor into a tv.

are schematics readily available for SC's?? i should probably go scrounge the forums..

thank you once again!

This set is in Sam's Photofact, and, Ryder's. You may do irrepairable dammage if you keep trying to use it as is.
Bill Cahill
_________________
Please also join us here; www.videokarma.org/index.php

there has been no continued use, i powered it on the one time, and dont plan on it again until i have gone over it.

i knew id catch some bad vibes from that though.. lol

I'm not bad mouthing you. I just know the quality, or, lack thereof, of old capacitors.
Let me point somethingou.
My chassis is very similar to yours.

The gent I got this set from in Michigan told me he had plugged it in to see what it does.
He said he heard a rather loud hum come out of it, and, set didn't play.
Looking at the electronics, I saw the following.....
First, there is a 10,000 volt paper capacitor accross the plates of the 1X2 hv rectiriers. That cap had nearly elxploded.It had done alot of spitting. Damper tube had had a melt down. That means there is a good chance other dammage was done.
Looked underneath.
One paper electrolytic had spat out it's gutts.
Another had done some spitting.
Two carbon resistors are charred black, and, one wire wounnd resistor is burned white. It had overheated.
5U4 rct., though still working, looks tortured.
Does it tell you anything? It tells me they kept plugging it in even after it quit.
I'm not sure how repairable mine is anymore.
Bill Cahill
_________________
Please also join us here; www.videokarma.org/index.php