Would you be interested in a thread on the extensive restoration, or?

Well, more good news. I have replaced all, but, two small paper caps in sync circuit. I also dug out a good picture tube. I will be installing that, then, sneaking up the variac to see what happens.
Wish me good luck, guys.
I hope nothing goes pop, or, bang, no smoke, fire, flames, and, that I get audio, and, picture on screen.
No guarantees.
I may take another picture of bottom first today.
This baby is nearly ready to try.
Bill Cahill
_________________
Please also join us here; www.videokarma.org/index.php

Well, I have both good, and, bad news. The good. I have pictures. Also, set doesn't blow up. The bad. I have a short. I'm only getting 5 volts on the plate of the horiz. AFC tube. I should be getting 200K resistance there, and, am only getting 91K.
Oh, OH. Also, my B+ is low. Set isn't doing anything. No audio, no vert. out. sound, nothing. I'm getting voltages on plate of vert. out., etc., but, a little low.
Audio amp voltages are a little low also, but, it should be doing at least something, and, it's not. 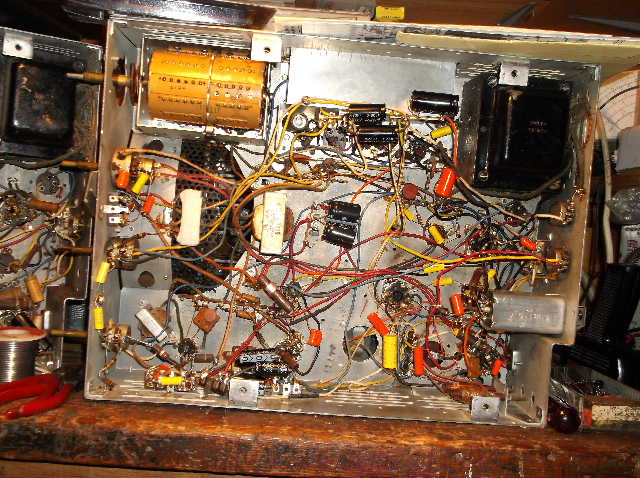 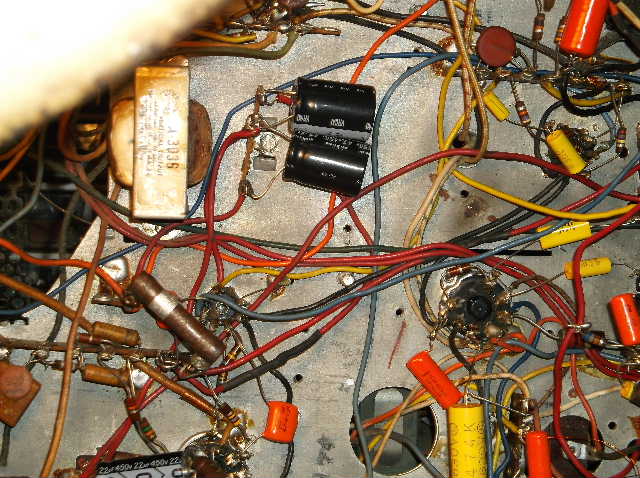 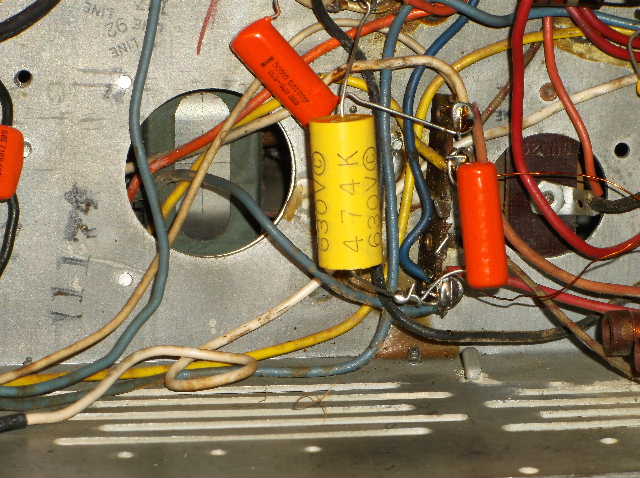 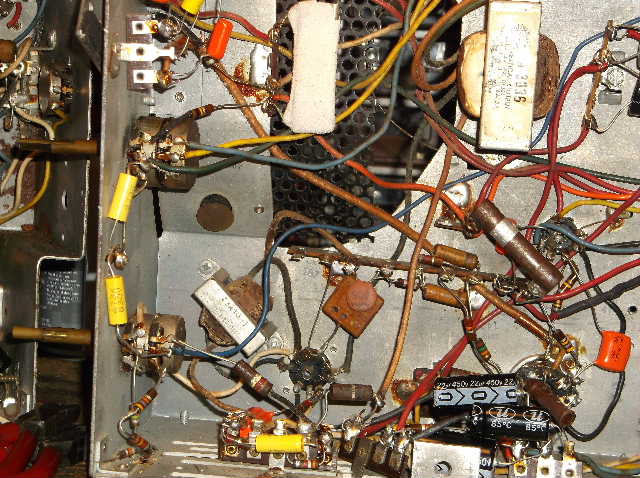 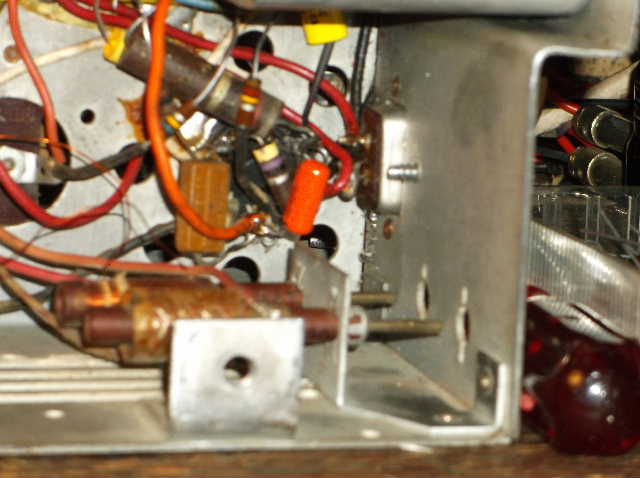 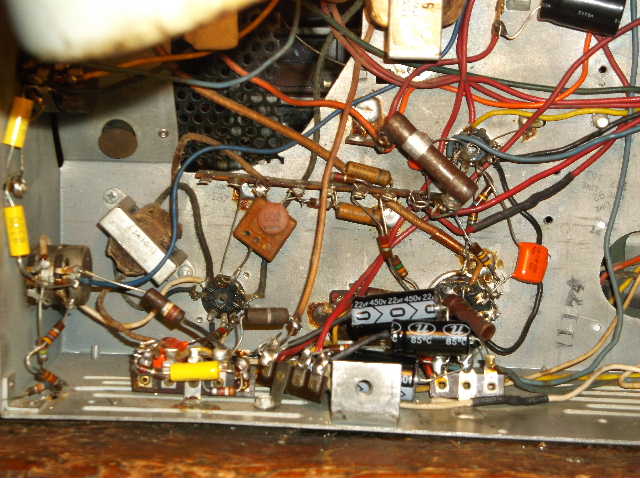 I'll have to start tracing to find the problem with the set.
Looks like thiws WILL take some time.
Bill Cahill
_________________
Please also join us here; www.videokarma.org/index.php

Bill, that's a lot of work and it looks great so far! How many hours do you think you have in it?

I don't presently have a running scope. But, sams makes it clear I should be getting 100 volts on the plate of the horiz. AFC section.
I'm only getting 6 volts.
I can't turn up variac to full line voltage because of this. With horizontal output tube removed, I got slightly higher voltage.
I had a mechanical short on horiz. out. tube, and, fixed that.
There was another short on horiz. osc., that I missed, and, I fixed that.

I have about fifty houss in the chassis rebuild, so far.
That doesn't include cabinet work, or, speaker repairs.

I got some nasty sounding static out of the spkr., but, at least that means the audio amp is working.
This set has definately turned into a nightmare.

Do you have the -55 volts on pin 4 of the 6SN7?
Do you have the Bietman service info? Has a lot of detail on the operation of the horizontal oscillator / AFC citcuits.
http://www.earlytelevision.org/pdf/admiral-20x1-rider-tv4.pdf

Well, guys, I have great news!
Today, after easily tracing the circuits, I found two bad resistors.
One feeds boost to the first filter on C2, and, vert. output transformer.
The other feeds the B+ off boost to the part of the horizontal oscilator that also feeds the horizontal hold control.

The hint was this... First, they tried jury rigging replacement resistors from low side of control to chassis when original 6.8 K resistor went open.
Next, remember I told you some leads of resistors had been squashed down on horizontal oscilotor tube, shorting out that circuit??
Well, it included that plate of the AFC sedtion.
It fried the resistor feeding high end of horizontal hold control. Resistor looked stressed, and, was cracked.
The resistor feeding vert. out. wasin't open, but, was almost triple what was called for.
Now, I don't think it would have prevented the osc. from working enough to produce hv, but, nothing would have worked, and, it would have been way off frequency, and, vert. would have been extremely short.

I don't have those parts in stock, so, shame on me, I jury rigged.
On low resistor going to chassis, I did an electronics no no. I put three resistors in series to come up with the 6.8 K I needed. I stole the other resistors out of the other chassis because they checked very close to what they were supposed to be.
Now, for the great news!
At 65 volts input on variac, I now get 75 volts of B+ on horizontal hold control, and, plate of AFC section.
Schematic calls for 100 volts there at 117 volts input.
It's high, but, presently, I removed horizontal output tube, which keeps voltage high without it.
Damper is obviously working.
I think it's time to put output tube back in, install replacement picture tube, and, try this bad boy to see what he does. I may very well have other bad resistors, and, I realize that. I just want right now to see if I can get a raster.
By the way, the noise I heard was a sizzling. It may have been the hv coming up.
I haven't replaced the tube yet. Original was a dud.

My hopes for this set have increased dramatically.
Is it jury rigged, ? Well, yes. But, I am very close to what it calls for, and, I am hoping for good luck. Actually, I'm using the sams. I was very concerned about getting letterally no voltage on the plate. I now have that voltage.

Bill, I haven't said much in this thread, just sat back and watched, but I have to say I'm very impressed with your work.

Thank you. I try to look for the reasons for things. One step at a time. This time, I solved two problems at once.
Bill Cahill

Last night I cleanned things on top, cleanned the ground spring, and, installed good replacement picture tube after cleanning it.
Had to re adjust the assembly on top. It was crooked.
Im that much closer to trying the set out.
Bill Cahill
_________________
Please also join us here; www.videokarma.org/index.php

Well, I've got both good, and, bad news.........
I replaced last two caps.
I get audio reception on cable on several channels.
However, I get no raster.
I've done some checking. It's low, aout 5KV, but, I'm getting hv on second anode.
But, no raster. I hear vert. buzz which tells me vert. circuit is working, and, vert. hold controll varies the speed.
But, no raster.
Bill Cahill
_________________
Please also join us here; www.videokarma.org/index.php

I changed out the picture tube tonight with no success. Played around with adjustments, and, finally got a picture. Not a good one, but, a picture. 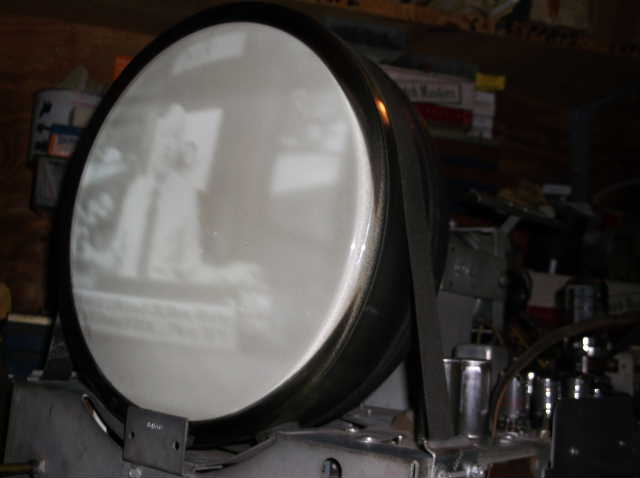 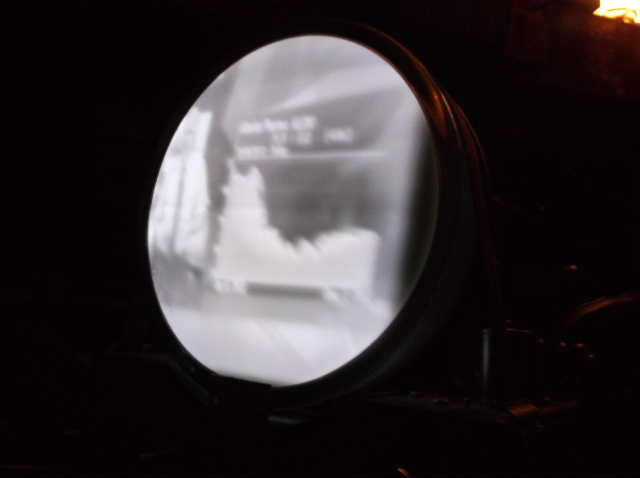 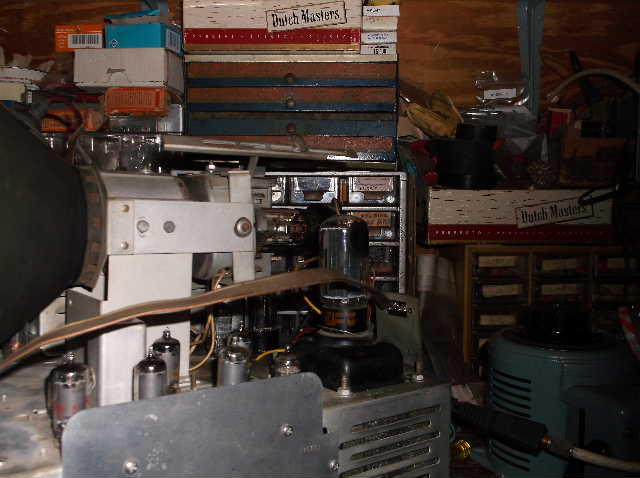 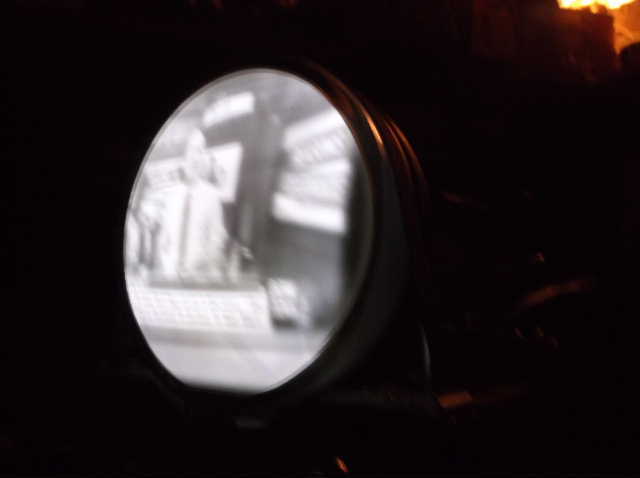 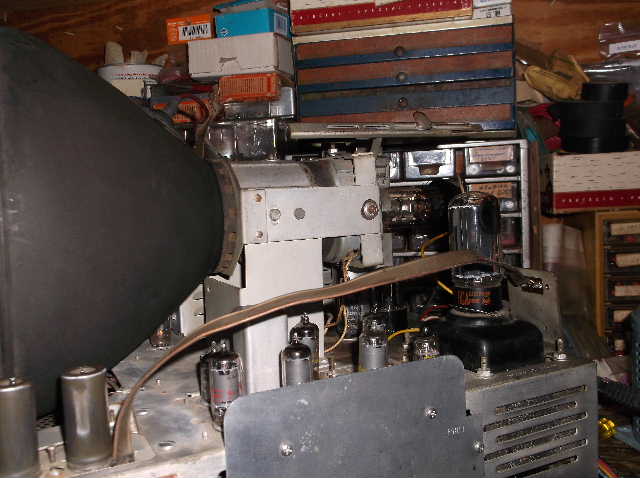 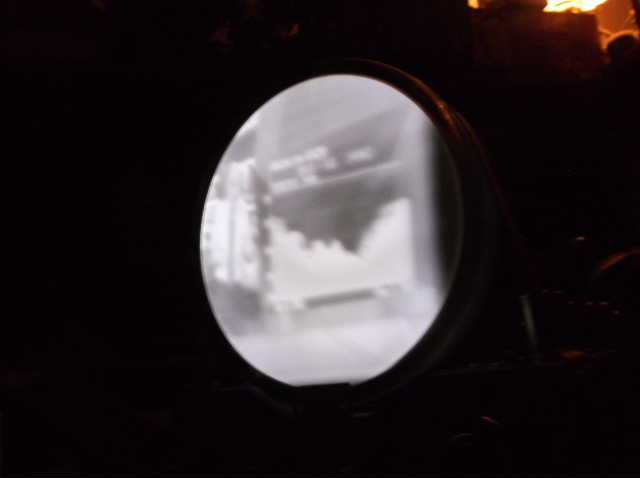 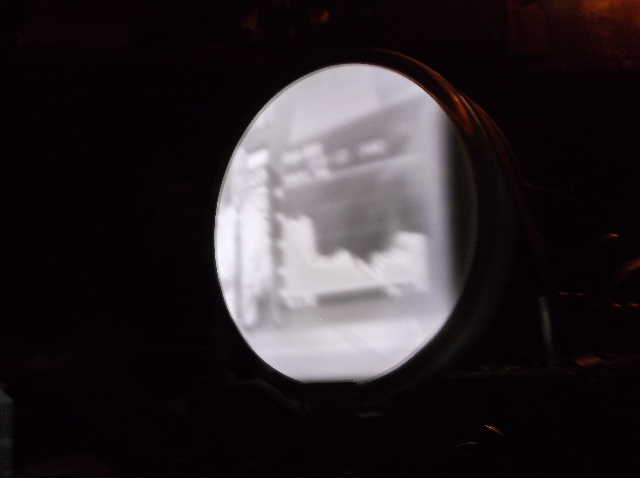 Bill, that is great! You are the man!

It's really coming together now!

Tracing the chassis, I don't yet find the resistor. I'll have to find it somehow.
The sams is on comb. set, which is set up differently.
Bill Cahill
_________________
Please also join us here; www.videokarma.org/index.php

Me sets aren't the same. Mine apparently doesn't use that 150 ohm resistor, and, in place of the two 750 ohm resistors in series with center tap, instead use a single 810 ohm wire wound reisistor in series with the center tap.
Big differences.
I think I'll jury rig that one resistor in, and, see what the set does.
Bill Cahill
_________________
Please also join us here; www.videokarma.org/index.php

That would be like old home week for that set!

Bill, you have more patience than me.

This is what I would have done;