Would you be interested in a thread on the extensive restoration, or?

I have this set. It's a  semi basket case. Good cabinet, though. I am waiting for a schematic from ebay to arrive. I plan on rebuilding this set, and, getting it to play, again.............
Anyone interested in reading about it, and, seeing puctures???????????
Could be a long project.
Bill Cahill

I had alot of major problems with Photobucket last week, and, it was down until yesterday. Then, I went back to classic style because I had so much trouble with the new style.
I have taken a number of pictures of the Admiral so far, and, will be downloading them to here from the site.
Stay tuned. The bad news is this set is in very bad shape, and, they made a real mess of it.
Someone had even installed a quarter inch speaker jack on the back of the chassis, but, had connected it to the primary of the transformer, instead of the secondary.
Yikes!!!!!
Cut wiring, and, even one of the lin. coil wires has beeen cut.
What a mess!!!
This thing is going to take awhile.......
Bill Cahill 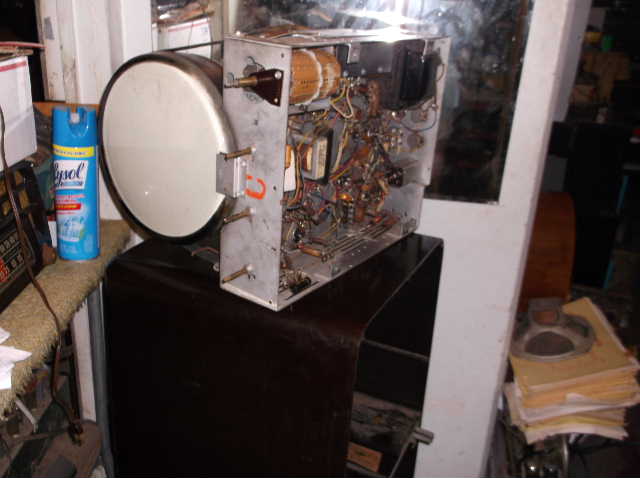 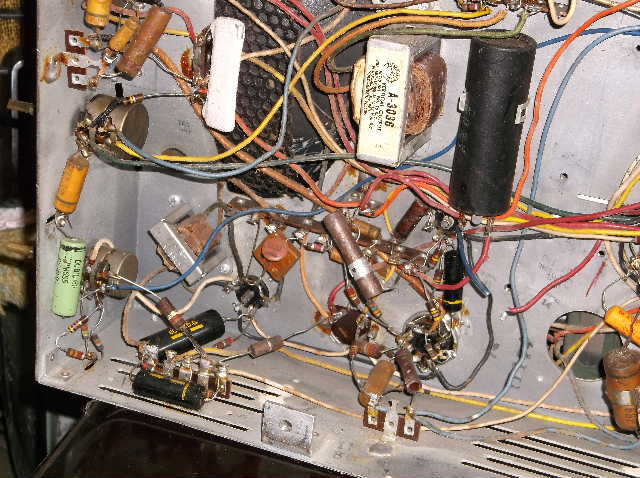 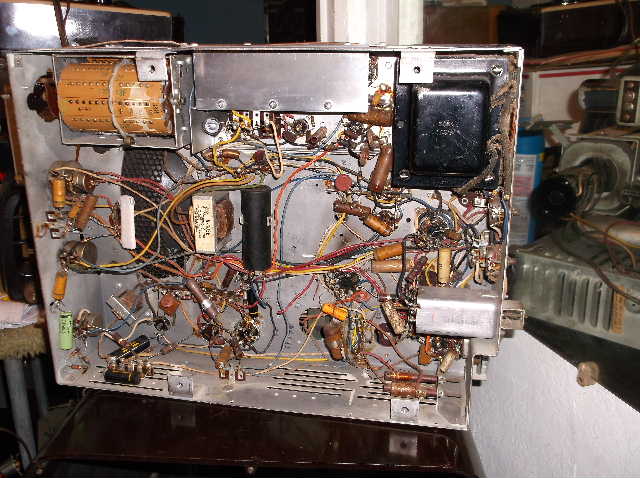 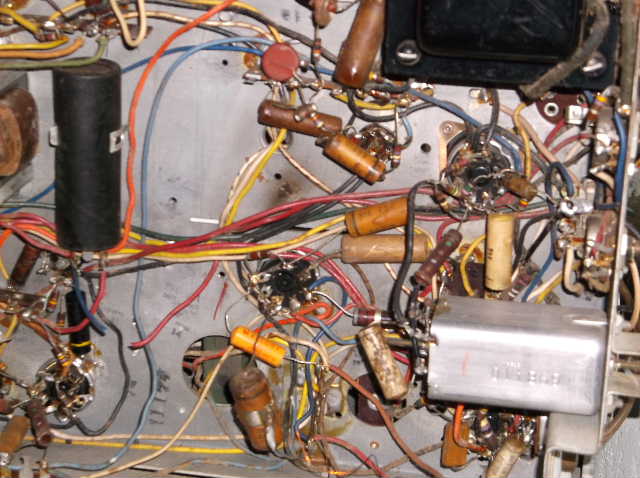 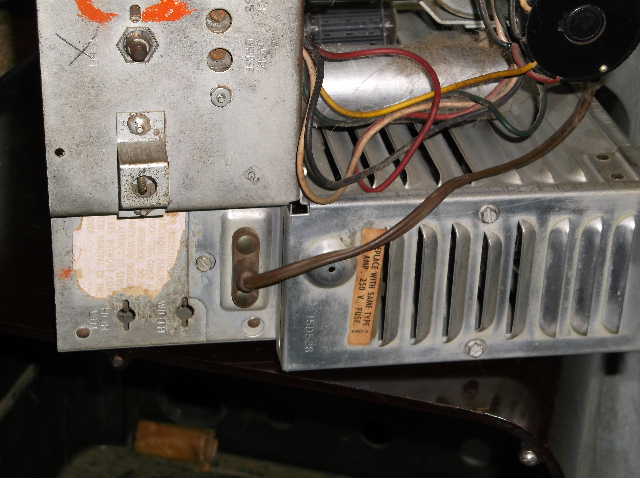 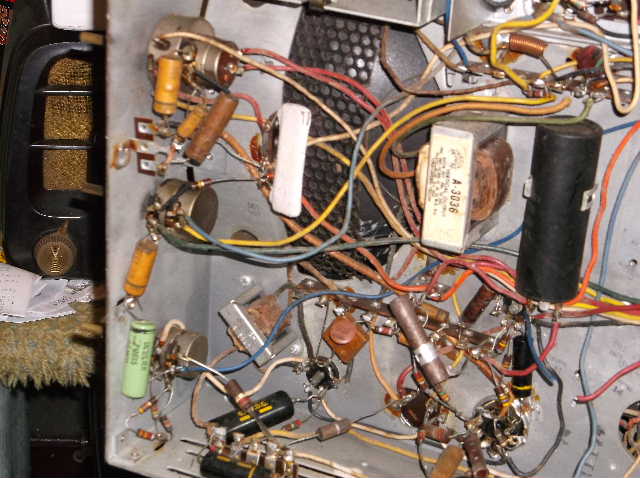 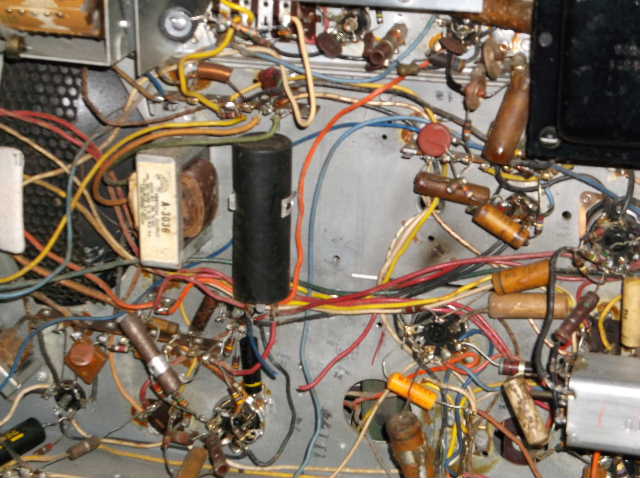 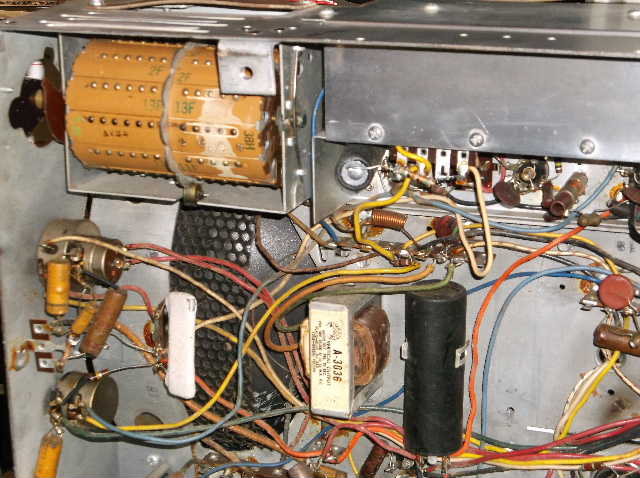 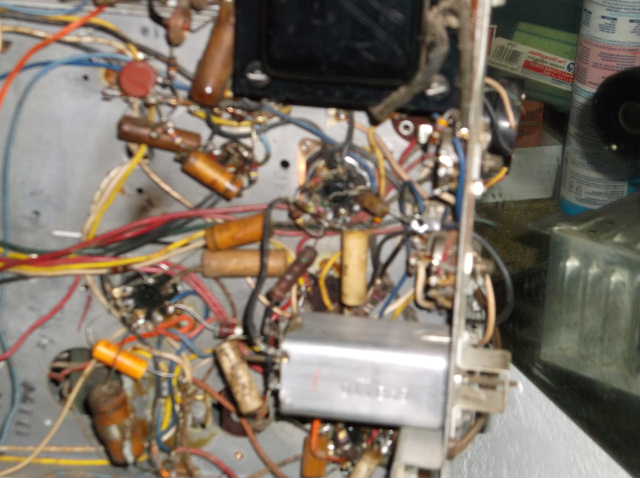 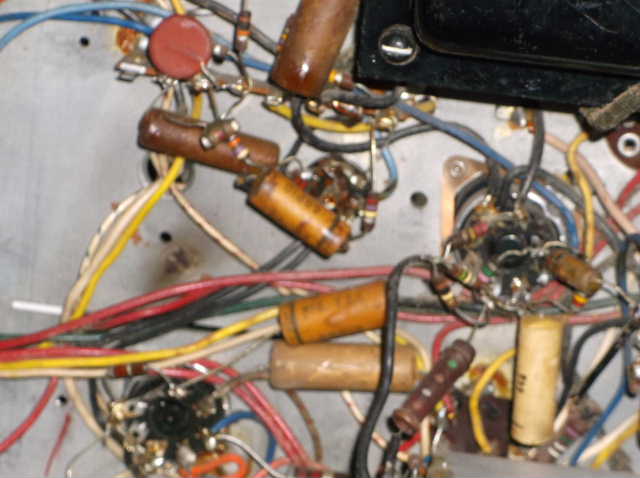 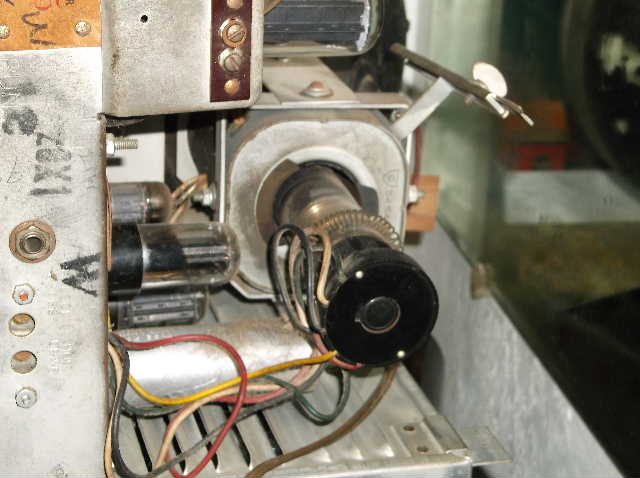 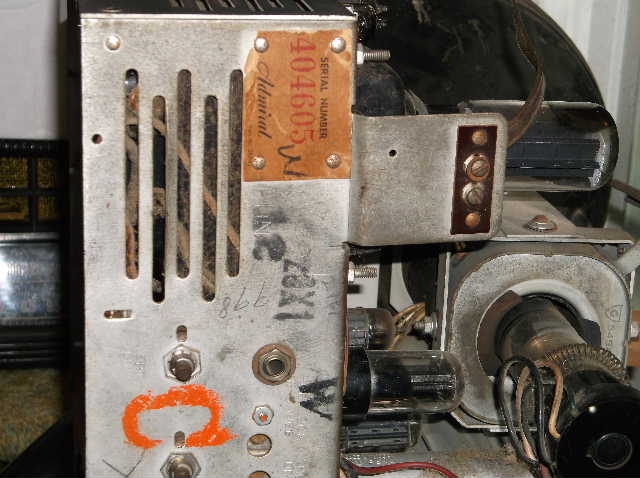 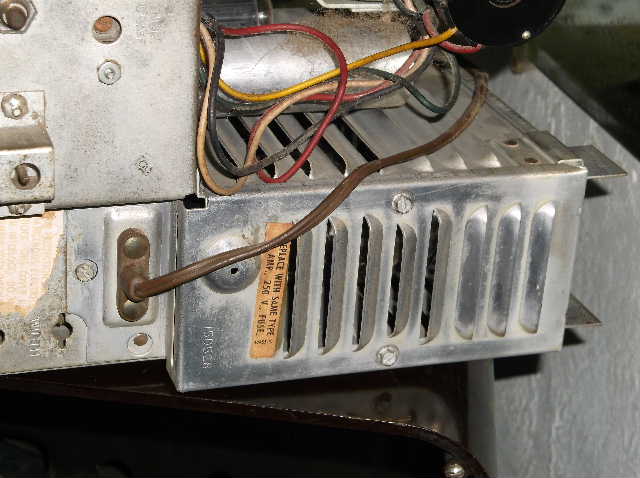 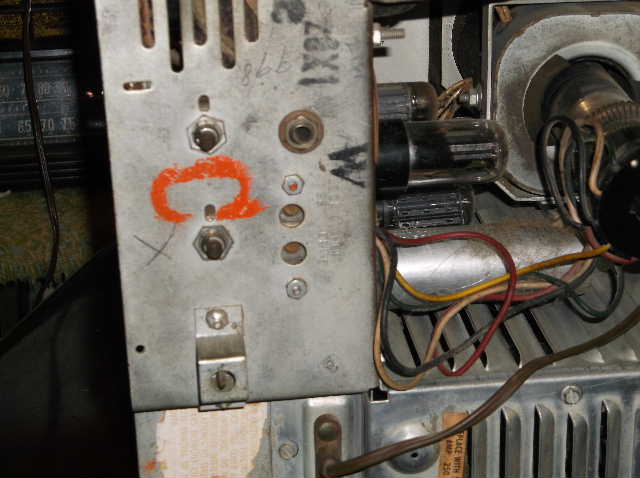 Is that the tuner? the thing with the brass nibs on it

Brass nibs?? The tuner is the large bakelite drum. Those points aren't brass. Only filthy.
What do you think?
I'm gonna save it.
Bill Cahill
_________________
Please also join us here; www.videokarma.org/index.php

My only problem with that set is that I can never find one. Everyone else has one, but I can't find that stuff to save my soul. Maybe someday.

Good luck with your project, Bill

I don't know why but for some reason I've lost interest in old TV's. I gave away a FADA table top TV along with the original table. The set had a bd flyback transformer but was otherwise in nice shape. I now wish I kept it. Bill I will follow this thread and maybe it will get me interested in old TV's again!

Well, stick around. I am almost ready to put it on the bench. I hope to take more pictures sometime this week. It will be as I make progress.
Too bad they ruinned, and, locked my thread on the family RCA at ARf. I was editing it, and, they permanently locked it. Claimed I was deleting it. Actually, I was trhwoing out the trash,, and, was going to add more photos.
Not good what's going on there. That's all I will say here.
Bill Cahill
_________________
Please also join us here; www.videokarma.org/index.php

Thanks. I'd appreciate that.

Progress report.........
On top. I removed dud picture tube, and, broke away all the concrete rubber that cushions picture tube on the neck, including on the focus coil.
I had removed the still good rubber from junk chassis. I replaced the rubber I broke out with rubber that is still alive.
I did some preliminary checking on speaker sockets.
The jury rig headphone jack that they wanted to use as a speaker jack is wired where the transformer primary would go. This, I suspect, has put a short in the B+.
I will be permanently removing that jack both electrically, and, physically. Not it on pictures of back of chassis.

This set has obviously seen alot of use.....
The old picture tube dud was a very cheap rebuild. No brand.
It's been there for a long time, as it was stuck to chassis, and, I had to carefully pry it loose.

I don't know what that red wire is that's been cut, and, I will have to trace it.
The blue one seems to be coming off the plate of the audio output tube. They connected a short jumper from the plate to one of the filter sections so the plate would still get voltage.
Looks weird. I don't know what they were trying to do, but, they did it wrong.

That chassis needs alot of cleanning. It's very dirty.
I'll probably do that this week.

First, I had to figure out the wiring on the speaker socket. Schematic doesn't show it for this set, and, let me tell you this. Both chassis are 20X1, but, the wiring wawn't right in the one I'm restoring.The way it was connected, only one filter was being used. An important wire had been disconnected, eliminating voltage from reaching the rest of the set.
On top of that, I still have to straighten out the wiring on audio output tube.

Add to that I had to ad wires to the speaker wires on replacement speaker to make it so it will reach.
I connected everything up , replaced missing filter wire to field coil, and, re wired speaker. I then connected speaker, and, boutght it up a little on the variac to see what the voltage would do.
I got B+ On all 3 main filters, though not very much. Filters are shot, and, I haven't replaced a single cap in it yet. This wasn't meant to try the set. Merely to make sure my voltage path was correct, and, it appears to be...
Rect. was beginning to get unhappy due to overloaded shorted parts. I'm not surprised. Next, I will start re capping the set.
This set was in very bad shape.
Bill Cahill
_________________
Please also join us here; www.videokarma.org/index.php

Bad news. This may be the end. I took mask to hardware store today to get screws. Someone had lost original ones. Cleanned it, and, found out it's badly scratched, chipped, and, tturned dark yellow.
Someone help me, please!
Bill Cahill
_________________
Please also join us here; www.videokarma.org/index.php

Is it all one assembly, or does it have a clear window that is affected?

The window, and, mask are one assembly that is screwed in. I polished it, and, got some of the scratches, and, the yellowing out. There are two bad scratcehs, and, a chip left, but, it's better. Lens is slightly cloudy, but, looks better. In a few mi., I will show pictures of the case, including the mask.
I have not cleanned case yet.
Bill Cahill
_________________
Please also join us here; www.videokarma.org/index.php 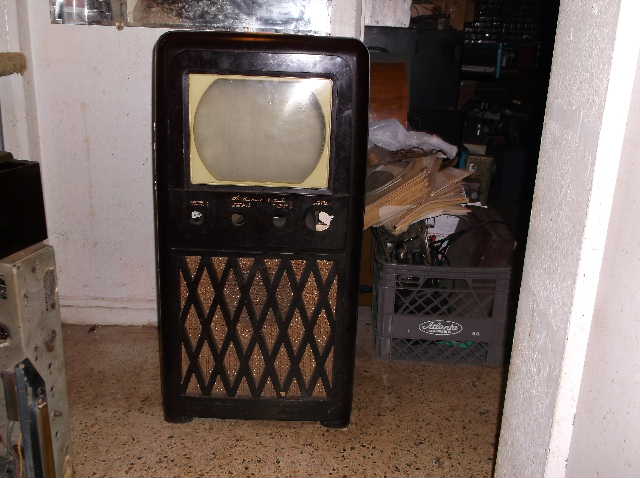 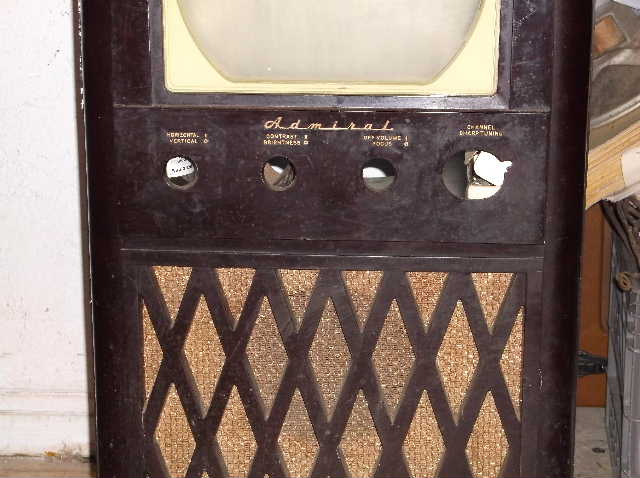 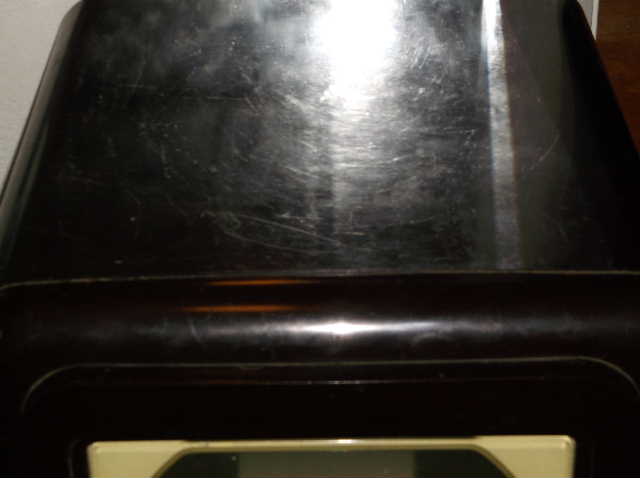 I would love to find one of these round picture tube TVs to redo. I knew a old repairman that had a huge building, probably 75x125. It had a walk around ledge filled with these old TVs all the way around the top of it. There were hundreds of those old sets in that building. I wish I had gotten a few of them. As far as this one It would be one of he ones I most likely would restore if I had a choice on what I find. I would keep it and fix it even if you had to search for another donor chassis for parts. It will be really nice fixed up. Was this the TV that had the largest bakelite case ever made. I was thinking this model was.

I think it was. Some collector has the equipment that Admrial used to make these cabinets.
I don't know who, though.
Bill Cahill
_________________
Please also join us here; www.videokarma.org/index.php

I worked in a factory that made bakelite cases for hair clippers. I was a really hot job in front of that machine. The Bakelite goes in like a powder and the heat and compression bakes the case. I can imagine how hot it was to make those as big as they are. I would love to see that molding for it. Its good it was preserved. Not much is like that.

Sorry, I got called away since I posted. That acrylic is a tough job to polish. I was thinking if it were a flat sheet, seperable from the mask, a sheet of lexan might work. Seeing the construction of it up close I see that would be out of the question. I hate to stand by without being able to help.

Thanks. Well, It should still be a watchable picture. Found more problems tonight.
First, someone had cut one end of a special capacitor in audio I F strip. I also discovered with the help of a friend, I have a potentially serious electrical problem.Someone had accidentally shorted out some parts on the horizontal oscilator socket, and, it caused sparking, and, there is a carbon path on the bottome of the socket..

Me thinks this set is going to need alot of work.
Whoever tried fixing it really didn't know what they were doing.

Last night I replaced the first capacitor in the set. Acapacitor on the video detector.
I wanted that done, because I'm thinking of mounting one of my terminal strips with some of the electrolytics under there.
Looked at bottome of 6SN7 horizontal oscilator socket. It definately has some charring. Looks like it was arcing, and, burning. I may have to replace that socket, but, I'm trying to clean carbon off it, first.
Oh, boy... Here we go again! Another nightmare tv!!!!!!

I also saw what looked like a slightly darkenned area on back of chassis. Must have done some smoking.

Hey Bill if you need a new piece of acrylic that is curved check with a sign making company. they use a different type of plexiglass that bend really easy when heated. I tried making some curved pieces for a jukebox with regular plexiglas and it wouldn't do just right. I stopped by a company that makes the plastic sign that goes into the signs and they showed me how they do it. They have a wooden pattern with holes and it is hooked up to a vaccum. They will heat it with a heat gun slightly and it forms to that shape perfectly. if you needed a replacement you might could mix up some plaster of paris and put it in the original one, Then you could use the mold as a pattern and lay the plastic over it and heat it to the shape.

Thanks, but, it isn't that easy. First, it's all one piece. Tha outer screen, and, the inner mask are one. Next, it has cut outs, and, patterns to fit the inside of the cabinet,and 12 precisely cut slots for the screws that hold it to the inside of the cabinet.
There's no way I could make that.
The table model sets use a different one with a seperate piece of plastic, a small piece of inner plastic for the mask, and, 6 dirilled holes for screws inside case in different spots from this one. Too bad. That one's in better shape.
Oh. Know anybody interested in an empty table model 10" bakelite Admiral case in good shape?
Bill Cahill
_________________
Please also join us here; www.videokarma.org/index.php