Hey All .
After a wet and cold spring , things are FINALLY staring to break here in Boston.

I wanted some specialty tomato seeds , so I started them from seed.It's the first time I've done so in many years. I usually like to buy PLANTS.

I'm also putting in some other stuff, but my plot is TINY and shady but I DID get some decent tomatoes last year.

i planted a garden last year and got some good green beans. a few tomatos and no corn

had to dig up the sewer line so that was right thru the middle of the garden yard is a mess. if it will quit raining i can till

I saw a video on a project for corn and our health and effects on our economy. Both had good and bad points. In 1970 a plan was dropped to subsidies farmers for not growing crops.

Finally a guy by the name of Butz (as I recollect) felt a need to stir the economy and start producing an overabundance of crops through farm subsidies. This implemented a drop in food prices, to the point of using only about 15 to 17 percent of the family budget to buy groceries. Where before most poor families were spending up-wards of 50 t070 percent for food.

Corn was the so called Godsend to this nation, McDonald's is one example of use of corn, Corn fed beef lead to fatter cattle, which means more fat and less meat in hamburgers, Corn sweetener, In sodas and Shakes, and Hamburger buns, corn syrup in catsup's and mustard and relish. Corn sweetener in apple turnovers, corn oil to fry French fries and the list goes on.

The have crossbred corn to produce more starch and less protein. We used to use Mexican corn that was high in protein, but no more, the mighty dollar rules our say to keep us from being healthy.

Since corn sweetener has taken over we have more tooth decay and more obese Children since the 70s.

This is to say if you want a healthy garden don't use hybrids for your vegetable growing.

Finally a guy by the name of Butz (as I recollect) felt a need to stir the economy and start producing an overabundance of crops through farm subsidies. This implemented a drop in food prices, to the point of using only about 15 to 17 percent of the family budget to buy groceries. Where before most poor families were spending up-wards of 50 t070 percent for food.

Earl Butz. We 70s-ers remember him well. Those numbers you are projecting are fruits picked from different trees, however. If there has been a drop in food prices in my lifetime it must have been temporarily quick and I missed it!

The latest call for alarm is that growers are jumping onto the ethanol bandwagon at the expense of food cost increases. I dunno. We've spent the past 5 or 6 decades whining both about the demise of American farming and the impending scarcity of fuel and jobs in the auto industry. Quoted in Time magazine recently was a bigwig in Brasil saying that they meet all of their energy needs using only 5% of their land. They are +/- US sized, all their new cars accept ethanol and not the 85 stuff. Thats like 3.2 beer

At the same time the environmentalists are going nuts because they are mowing down the Amazon basin (which they have been doing since I first read the Scholastic Weekly Reader in Third Grade back in 1961).

Soooo...if they are meeting their fuel needs is fuel directly related to their need to "mow down the Amazon" or isn't that a natural occurrence of the growth that would have (lamentably) happened anyway? Their farmers are making bux, they have a healthy auto industry, they aren't dooking it out in the Middle East, they are filling their tanks in the $4 range without subsidies or fear of supply cuts.

Of course Brasil isn't the US. Their fuel demands aren't like our Chicago or Boston but they make a very convincing model as how to supplement our national demands.

Hey All.
After a SLOW start my garden is really coming along. Corn is nearly 1 ft tall and all other plants really starting to take off as well.

Here is my farm: 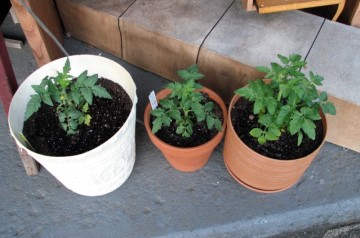 Two plants are cherry tomatoes and the other one is patio tomatoes.
By the end of July I should have something to eat.