Thanks for the compliment. NO. I know the leakage is from the power transformer. I'm looking for another one, but, was using this one for testing in the meantime.
I'll just keep looking.

I'm sorry to hear of all the issues with it Bill. Keep your chin up, never know when a good parts set, or a better set to-boot pops up. 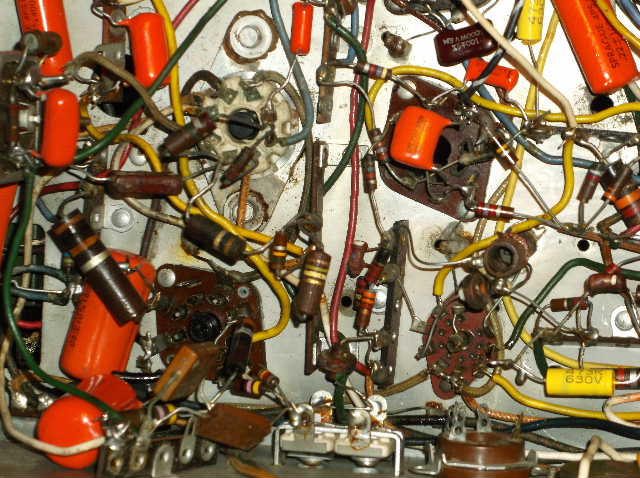 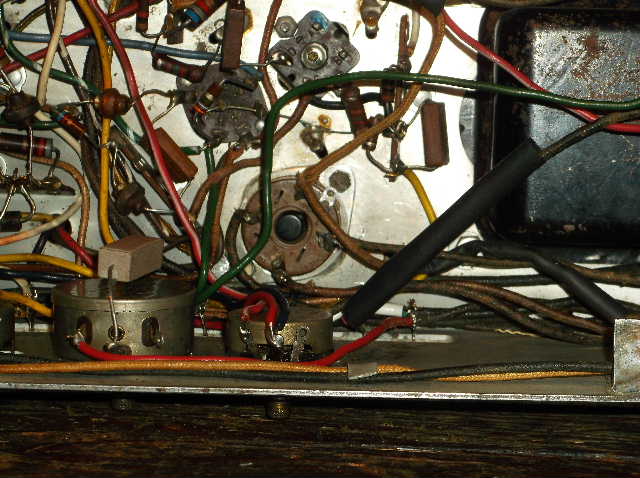 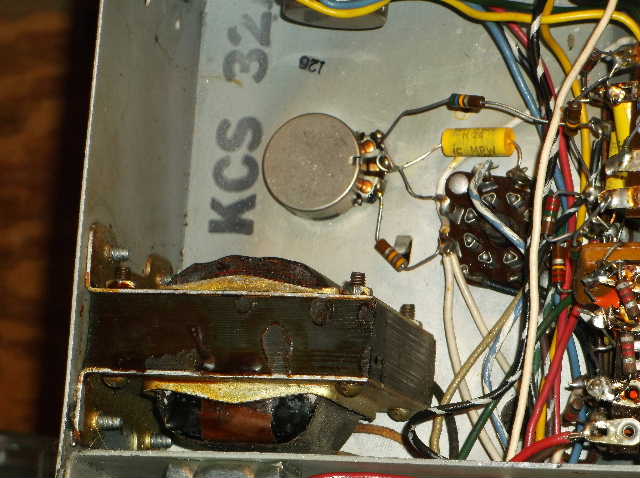 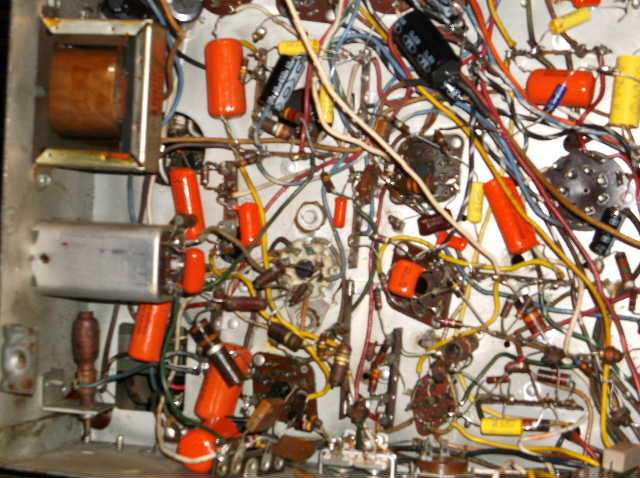 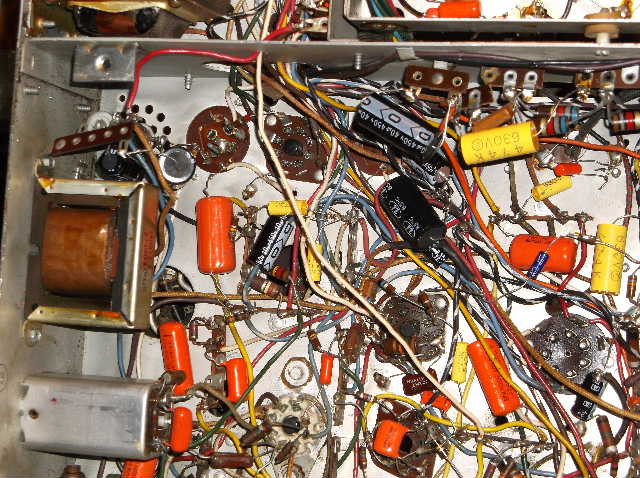 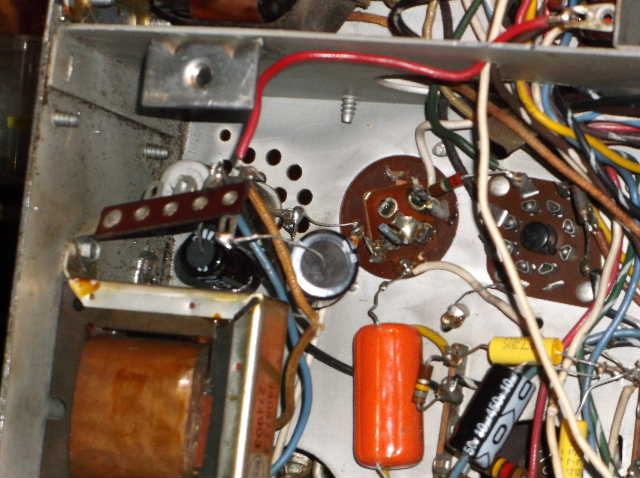 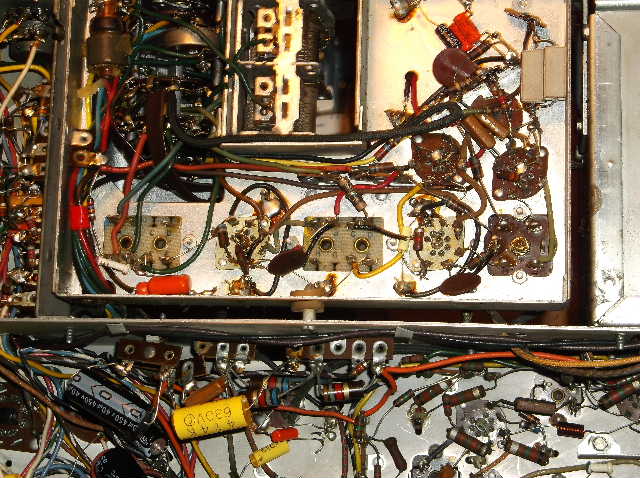 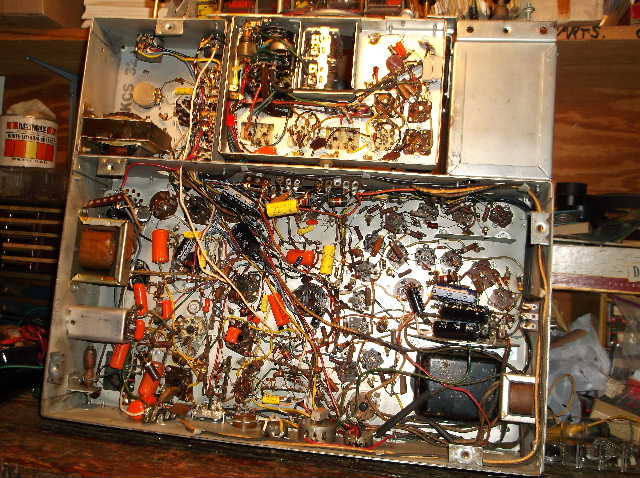 It's getting some color to it!

This beastie is going to take time. Besides still having to find a good power transformer for it, I now plainly see I must replace three tube sockets. I have the replacements now, but, they will be difficult, at best.
This will be slow.
Bill Cahill
_________________
Please also join us here; www.videokarma.org/index.php

Started drilling out rivets on tube sockets this morning, and, while I'm doing that, I'm removing rust.
ONe socket, horizontal Output, is now loose. I have two more to get rivets out of. I'll be cleanning up more rust, and, then, put parts back on. I will then start wiring in new sockets, and, mount them in place. This will be a long project, but, it's started.

Now that I put this post in the right place, let me add this.
I have now drilled out rivets on second socket, and, removed more chassis rust.
It looks like there may also be a fourth bad socket. The horizontal oscilator.
Oh, boy........
Thanks, Tony, for noticing my posting mistake.
Bill Cahill
_________________
Please also join us here; www.videokarma.org/index.php

Well, yesterday I started re wiring the hardest one. The horizontal ouput tube. It's half re wired, almost..
Having mounting problems because correct size of screws were in the way, and, not allowing me to get the tubes all the way in, so, yesterday I bought smaller screws, washers, and, nuts.
Bill Cahill
_________________
Please also join us here; www.videokarma.org/index.php

Well, almost finnished on Horizontal out. socket. When done, all drips cleanned, and, wirring neatenned up, on to the next one. Tha AGC amplifier.
After that, the sync amplifier.
Slowly coming along.
Bill Cahill
_________________
Please also join us here; www.videokarma.org/index.php

Personal opinion:
I now think this set really wasn't worth fixing. However, I'm a stubborn old cuss, and, I ain't gonna let no bad sockets stop me now.
I'm so close at this stage of the game.......
A few more sockets, and, I'll give it the filament test again. Upon success, I'll very slowly try it for B+. I think I'll try radio first.
But, that's not for awhile, yet.
I see gray corosion on the sockets I am replacing. Pins are dark brown underneath, and, the bad ones have definately lost their springy temper. You tighten, pull tube out. Voolah! They're loose again!
Most, if not all the miniature sockets seem to have avoided this, but, MOst of the octal sockets were badly dammaged. Especially at the back of the set, and, up to the middle.
I've now replaced the sockets for the 5U4 low voltage rectifier, 5V4 damper, 1B3 hv rect., and, 6BG6 horizontal output.
I still have to replace both 6SN7 sockets dealing with AGC amp, and, Sync Amp. I may have to replace socket for 6SN7 horizontal oscilator.
This set really has had manny major problems.
Reminder of other replaced parts.
All potentiometers on back.
B+, and, B- resistor strip on back of chassis.
Resistor going to center tap of focus control.
Resistor going to filaments on Radio chassis.
Several tubes, speaker, several sockets.
Entire hv section, including lin. coil, and, flyback, along with entire hv cage.
Screws.
All electrolytics.
All paper, and, one mica cap.
patched bad wiring to focus coil. It had rotted.
Focus coil appears to still be good, as It was distributing voltage to rest of set on lv tries.
I was able to repair a crooked control problem on front of chassis. The part where dual controls mount of the sub chassis was bent.
I still have to replace dial cord on radio.
Replaced power cord, and, neatenned up things.
Removed more rust on chassis.
Radio dial lamps.
Well, that's how it sits now.....

For those thinking I'm out of my mind, well, maybe. But, I come from a stubborn family that doesn't believe in quiting on projects we choose.........
I'll have more pics when I'm more finnished with socket replacements.
Bill Cahill
_________________
Please also join us here; www.videokarma.org/index.php

Sounds like your going to have more work in this one than you did in the family set.

Bill Cahill
I did TV repair for 20 odd years and got into the tail end of tube sets and I would not attempt to do what you are doing. Those sets were hard to fix when they were relatively new. Always had bad tube sockets, high voltage leaks, and fatigue from hard use.
You have my respect.

Bill, I think your crazy but admire a great deal how stubborn you are.

A better man than me and I only worked on TVs coming off the assembly line. None of that aging crap, only misswiring and cheap bad components.
Regards, Jerry

Bill that's a little to far from good old WV for delivery unless you want to pick it up.

Sorry to hear that. I am fighting cancer and to weak to drive that much or pack it up to ship. Was worth a shot. I would like to find it a home.

Just finnished wiring in the last of three bad octal sockets. It took me most of the day to do that..
I'll get pcitures as soon as I can....
I'll give it the filament test again, then, try it for low voltage testing.
I replaced two more bad resistors. One on AGC rect. section of 6SN7, and, other on sync sep. section of same tube.
Bill Cahill
_________________
Please also join us here; www.videokarma.org/index.php 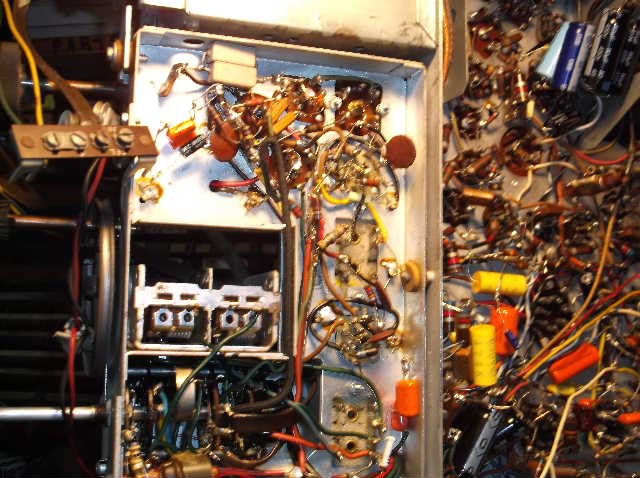 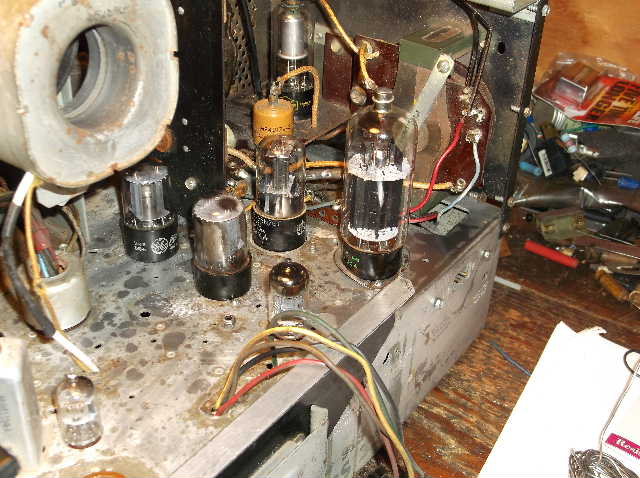 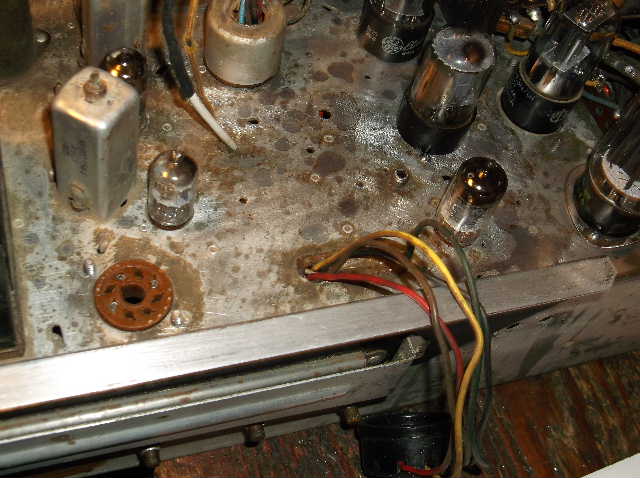 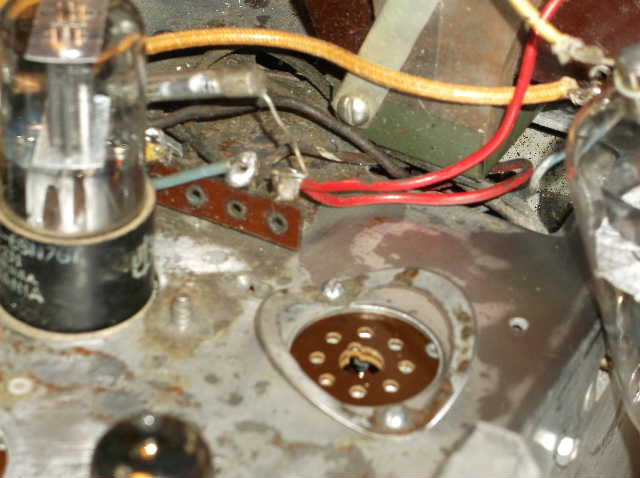 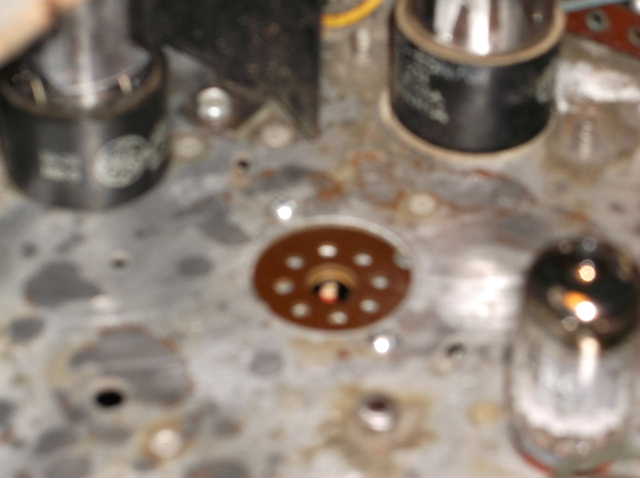 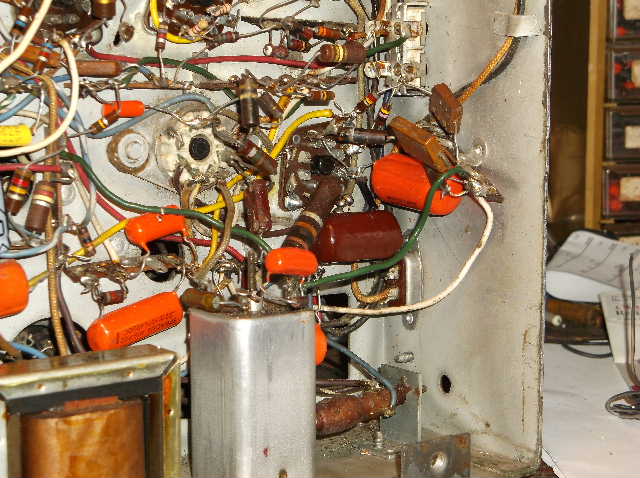 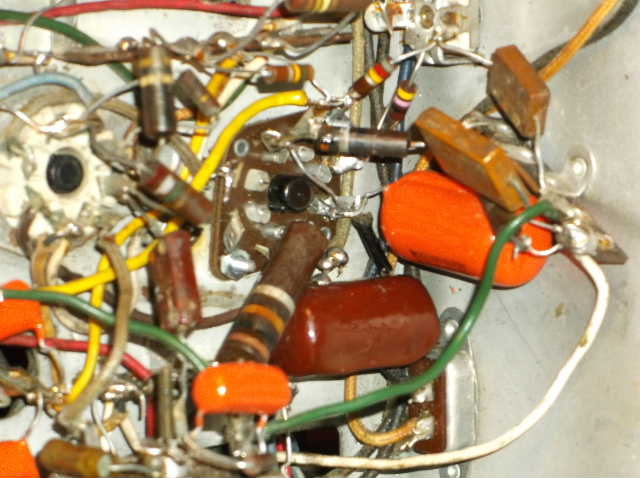 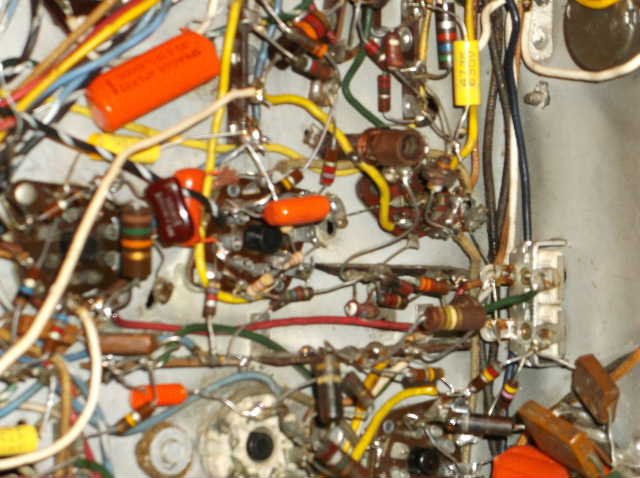 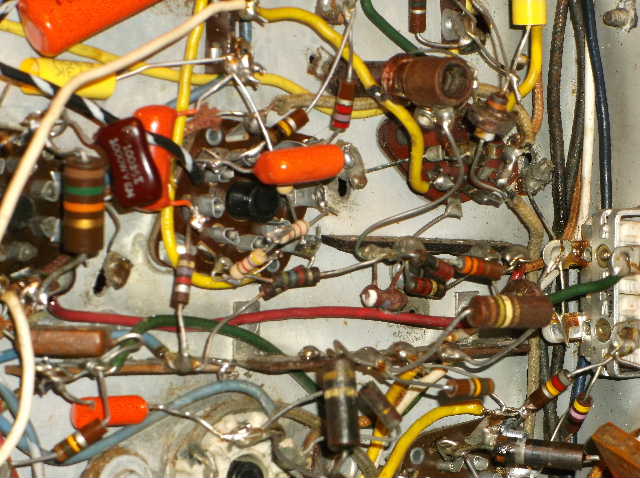 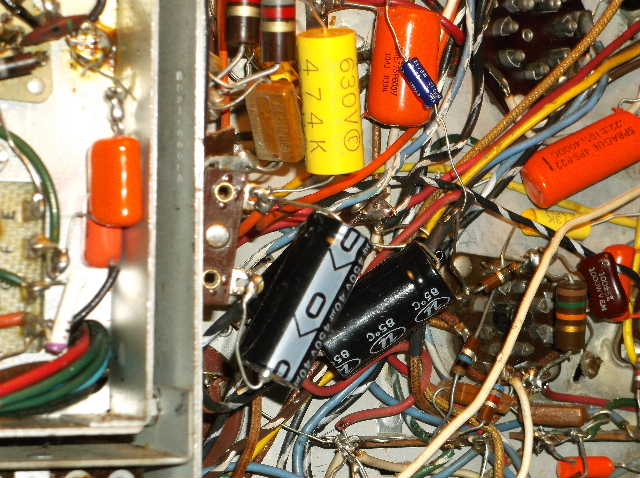 Did some voltage testing from ac line to chassis this week. Power transformer is far too leaky to be safe to use. Cord interlock socket is also leaky. I have to replace that, and, transformer, for sure.
Bill Cahill
_________________
Please also join us here; www.videokarma.org/index.php

O.K., I may have some good news.............
I have the chassis from an RCA I gave up on, a model 8T244. No longer have the cabinet.
In almost every way, except power supply differences,, and, no radio, it's a clone of this set.
Resistors, focus coil, controls, flyback, tuner, all the same.
The one big difference is the power transformer.
DC voltages are exactly the same. The big diff., besides part numbers, is my set has a wire wound resistor in series with center tap of B- to Negative sides of filter caps. Apparently, to cut voltage.
Apparently, that transformer puts out a slightly higher AC voltage than the 244 does.
They are both 115 volt transformers. I think at today's line voltage, it should be fine, and, if worse comes to worse, I can pull the risistor.
I'm going to put that chassis on the bench, and, check transformer out.
Bill Cahill
_________________
Please also join us here; www.videokarma.org/index.php