Sounds like plenty of work ahead, but I am sure it will be worth it. Can't wait to see finished product.

You should name your new dog Lazarus. I seldom see such perseverance in restorative work! It's been an interesting story so far! I don't know if I will ever attempt a TV as they are a little high stakes for me, but I like to read about and see them being done!

Here are more pictures of the chassis showing dammage...... 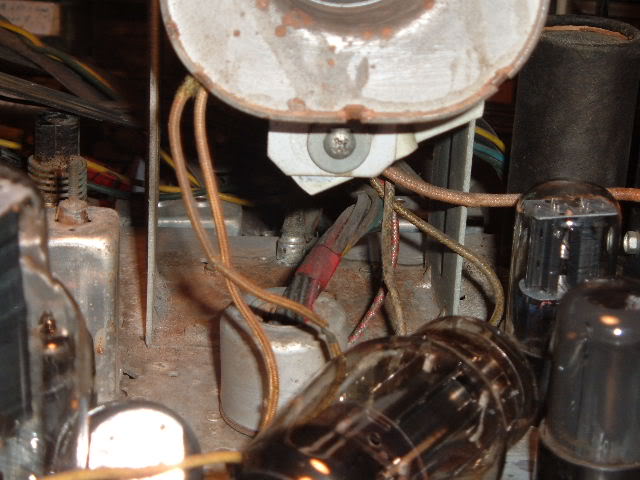 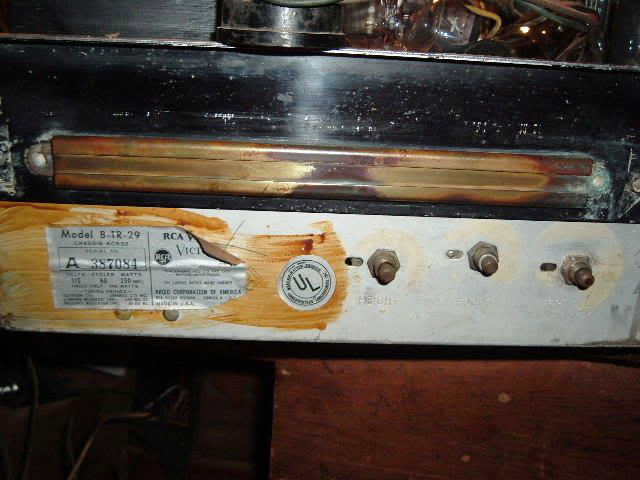 I've been slowly gathering more parts to repair set. Thenk I can start rebuilding it.
Of got a donor chassis that's similar that I can steal more parts from.
Bill Cahill
_________________
Please also join us here; www.videokarma.org/index.php

When will I learn?? I was going to put set back on the bench tonight to work on it this week. stupidly, I had crammed things inside set. I got to the last item, a radio back cover.
It got tangled in the radio dial cord.
The cord came unraveled.
Phooey! A new problem to fix.
Bill Cahill
_________________
Please also join us here; www.videokarma.org/index.php

I don't know how I neglected to post pictures, but, here are more earlier pictures of my progress on the set. 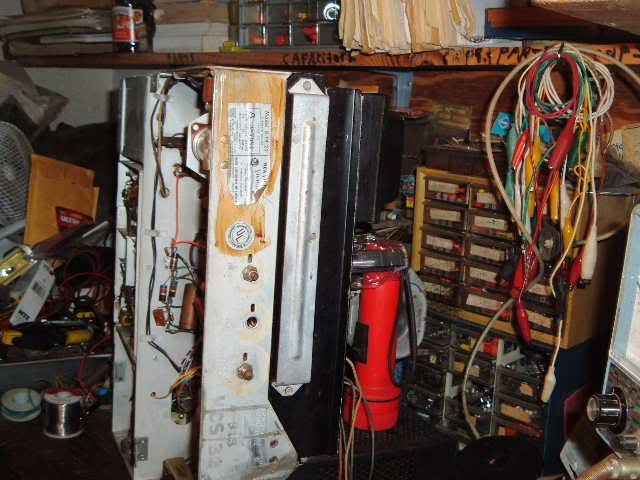 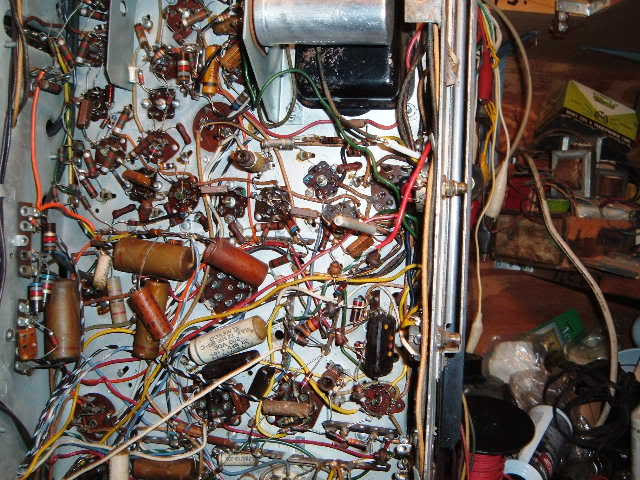 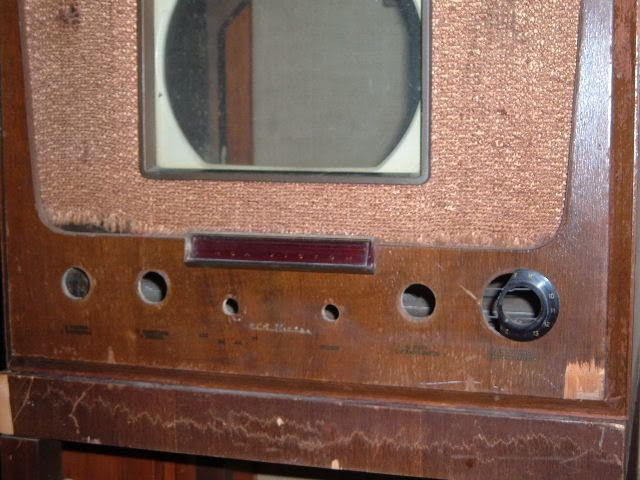 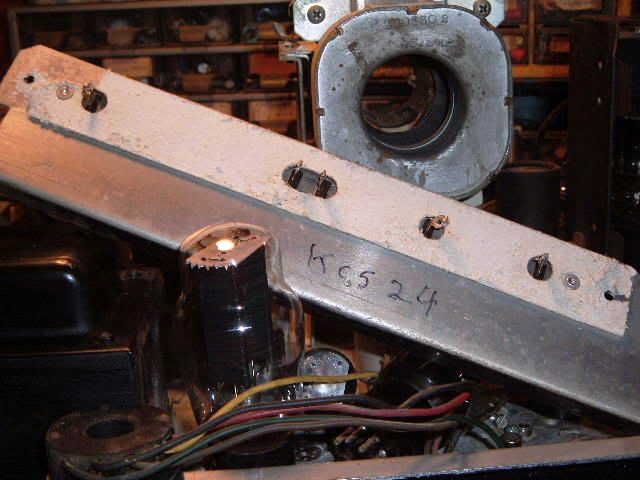 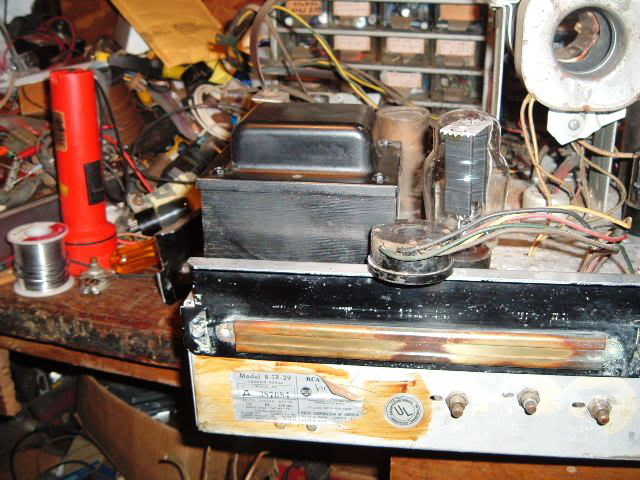 That's a piece of history. I was watching Pioneers Of Television tonight. That set was made around the time Betty White started her career on TV on Live local TV.

When I got the set people were telling me Get rid of it. You've got a good picture tube. Just consider yourself lucky.
But, I have only seen one other chassis like this, and, that was when I was about 13. A neighbor threw out the chassis, and, kept the cabinet. I was given the chassis for parts.
I was amazed that there was such a thing as a tv with a radio in it.
I gave up on a set a few years back that had the same flyback, yoke, resistor bank in power supply, and, some of the controls on back, and, changed dammaged parts. I replaced the entire hv supply, including the cage.
The core on the original flyback was highly rusted, and, the coils wwere moving very loosely, all the while making a crunching sound.
The flyback from the set I stripped to fix this one is good, and, was working fine.
I want to dig that chassis out, and, see if there are any other parts I can use from it to fix this one.
Bill Cahill
_________________
Please also join us here; www.videokarma.org/index.php

Bill All I can say is this,

Some people not all
see these things a junk for the trash and nothing more. However you myself and other persons see it as were saveing History One tv or radio or even a phono crank or not One at a time

. We Have a True passion for the Hobby. I see it as were or We are as you may say Saveing and perserving History and this is what we like to do

no matter what anyone says

Thanks, Bill.
Got chassis on the bench finally. Dial cord is completely unstrung.
I've also found out most of the electrolytics are hanging by the wires because the pop rivets let loose.
Still a fair amount of corosion, and, a more serious problem. This set uses a geared channel selector, and, the detent is gone. Also, the fine tuning shaft is either rusted, or, just plain stuck to channel selector shaft, so, I'll have to work on that.
Further, a set of controls are tilted sideways because the chassi is dented in where controls mount.
That will be interesting to fix.
Terminals for one of the cual controls with the vol on-off are rusted, but, that is fixable.
This set needs lots of work.
Bill Cahill
_________________
Please also join us here; www.videokarma.org/index.php

That should make for an interesting story.

Your welcome Bill
Just me allways adding in my $.02 worth

Project is back on hold. The focus control has to be replaced, and, it's an odd ball. Also, I'll have to get someone else to repair radio dial cord for me.
So, it's going back in the cabinet.

O.K. I discovered a nos control in a junk chassis that never got connected. It is about one hundred ohms higher, but, I think it will be fine. Not sure of wattage, but, looks like a four watt, and, it fits the foot print of original control perfectly.
Now, I have to replace a resistor going to it. Then, I start re capping set.
Bill Cahill
_________________
Please also join us here; www.videokarma.org/index.php

O.K. Now, here are the latest pictures showing the rebuilding progress on the set. I have a long way to go. I have replaced the under chassis paper caps in audio amplifier, and, have almost half the filters replaced. I have replaced the focus control, and, resistor that goes to center tap, which was open. 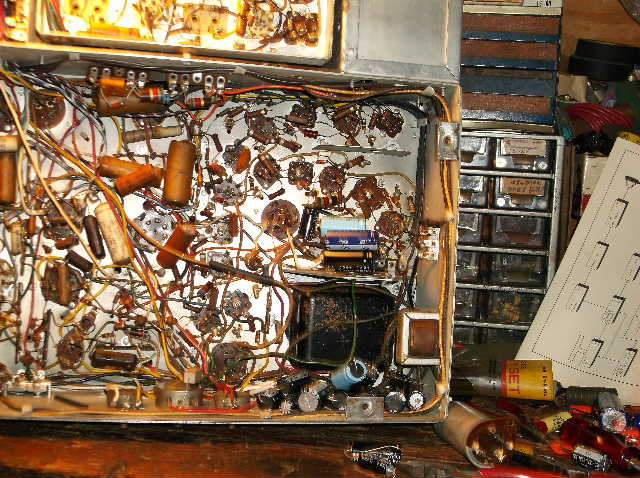 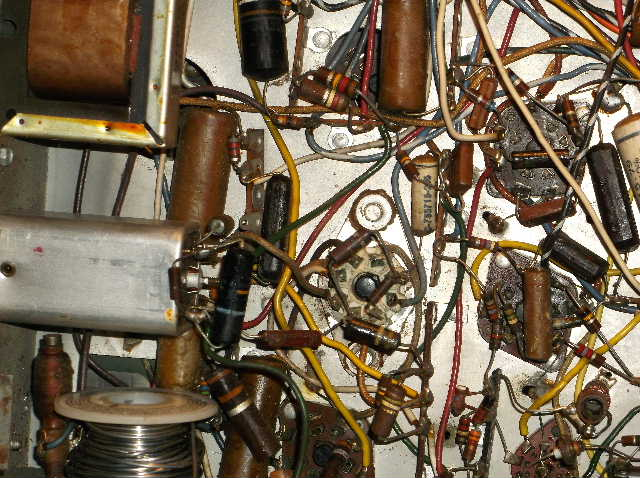 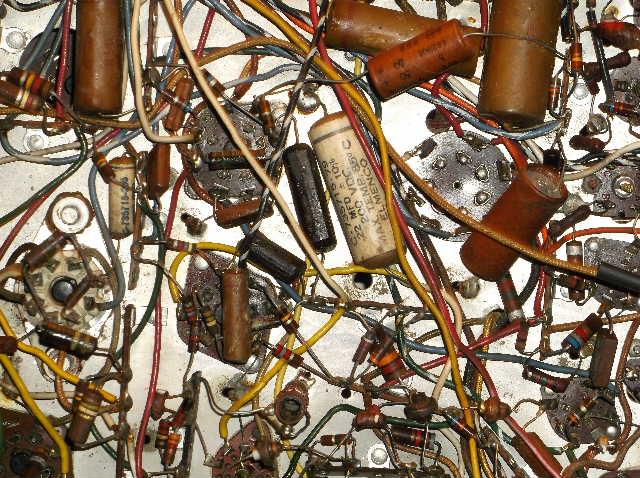 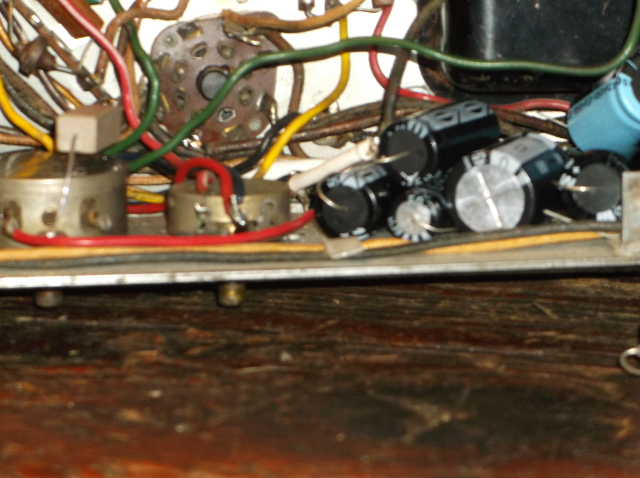 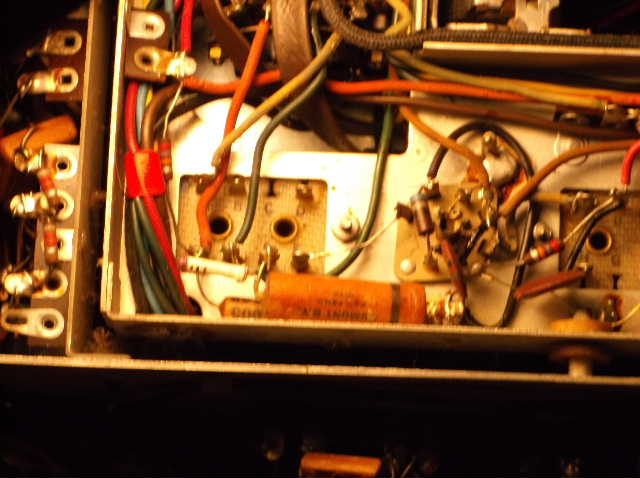 Nice looking set. I remember when I was about 14 years old I worked or a repair guy. He had this color TV that came in and it was so old the picture tube opening was completely round. It was probably one of the first color sets. I asked him what was wrong with it and when he was going to look at it. He said he wasn't as it was too old to fix. I am glad some of these old sets are being fixed.

You've got your work cut out for you. It's remarkable what short work you make of it.

Well, thanks, but, I will leave my hallo off until I see what this set does. It is ovvious it sufferred multiple disastors. I'm not sure what it will do. It's about parr with my RCA Victor 6T74 condition wise.
I have to get back on that set. I think it's almost finnished.
So much to do.........

I'm way behind, yet , on projects.
I still have to again fix vertical problem on 10" Admiral, and, get back on my 16" Admiral. I thnk the micas crashed.

Well, it definately looks like this is going to be one of those long projects.
5U4 Socket fell apart. No surprise. Tube was also burned out. With some difficulty I removed old socket, put in a better bakelite socket, and, a new retainer clip for the tube.
I now have to wire it abck up.
At low ac input I'm getting equal ac voltage off power transformer.
The socket looked pretty well cooked, and, it was.
Bill Cahill
_________________
Please also join us here; www.videokarma.org/index.php

O.K. Some good news. I replaced wrecked tube socket, and, burned out tube. It got some B+ Now. Not very much, but, some.
I still have alot of parts to replace..............
At about 40 volts ac I was getting 30 volts of B+. Not alot, but, I've ony just started rebuilding the set.
I am getting bias voltage also, which is good news. Have voltage on focus coil, vertical circuit, and, audio. Didn't check anything else.
Just wanted to see if the divider is working, and, it seems to be.......
Bill Cahill
_________________
Please also join us here; www.videokarma.org/index.php

I want to make a personal observation here. Maybe even a rant.
It seems to me, for whatever reason, I gravitate to all the troble sets, etc...
Let me put it this way.............
RCA Victor 6T74 Major problems with burn outs, shorts, and, worn out parts. Finally,nearing finnish.

RCA Victor 641 TS Wrong tubes deliberately put in. Non operating condition. Burned out speaker field.Replaced early RCA 3 spd changer in place of single speed that used to be in it.
Everything was full of transformer tar.
After getting cheated on parts, and, alot of work. I got radio playing. Haven't touched tv yet, except for putting correct tubes in.
10" Admiral 20X122 bakelite console tv.
Ruinned speaker. Dud tube. original chassis was junk.
I have an exact replacement chassis in it now. I had major shorts in that set due to someone playing with it that clearly didn't know what they were doing.
It had two bad controls, burned resistors, messed up wirring, and, no knobs, pan, back, or, screws.
That set plays now, but, vert. problem came back.

Admiral 16" round tube 3 way comb. 36X35 Wrecked record changer. Dammaged cabinet, I got radio playing. TV has no hv, and, horiz. osc. is dead. Haven't gotten back to that set, yet.

Admiral 16" round deluxe tv. It had burned parts, a disastor cabinet, dud pix tube, a bunch of bad tubes, and, jury rigged up the ying yang. I got it playing, but, it's down again. Repaired broken wood cabinet.

Now, this set. The beautiful RCA Victor 8TR29 tv, radio on original floor stand.
Major veneer problems everywhere, including stand.
Missing a knob. Picture tube good.
Chassis had had multiple disastors.
Don't know where to start there......
Let's see.......
Burned out back resistor bank. Shorted vert. Height control. Dammaged controls on back of chassis, including focus.
Dis intergrating 5U4 Socket. Burned out tube. Broken tube laying in cabinet. Corosion, and, rust all over.
Flyback ruinned from rust, alnog with horiz. lin. Coil.
Burned out resistors. Shorted caps.
Ion trap in pieces.
Wirring rotted. Speaker ripped. Grill cloths problems. Broken channel escutcheon.
I now have some voltage coming out of power supply with shorted electrolytics still in set, and, a ton of shorted paper in it.
I replaced burned out back resistors, dammaged controls, burned out focus resistor, and, entire hv section with good, used correct parts.
Focus control is a close jury rig.
I knocked dial cord off radio by accident. Havn't nad any luck fixing that, yet.
Replaced speaker with good original replacement from another RCA tv.
Still working on chassis, and, case. Haven't touched stand, yet.

It looks to me like you enjoy overcoming challenges. It would be hard to watch if you were not so adept in doing so. It seems as though the beautiful sets have been snapped up for non working set dressing, or have had the works replaced to have the appearance of function, or gutted for their appeal as furniture. Your restorations are examples of the period technology and a learning experience for those who follow the restoration or see the functional set.