I bought a Philmore 5 tube radio kit off eBay recently, and assembled it, using all newer resistors and caps (including Mica's).

I tested all the tubes that came with it in another AA5 chassis (Motorola), to verify that they were good, but unfortunately, I can't get this radio to receive stations.

However, I can only get a 455-500 Kc tone when the signal is applied to the plate at pin 3, and nothing after that, so I assume that the problem is in the converter/oscillator stage.

I have tried two other 12SA7's, in addition to verifying that this one is good, and also tried substituting another variable tuning capacitor. The Oscillator coil shows continuity, with about 4.5 ohms resistance.

EDIT; I forgot to mention that when powered up and the tuner rotated, it does provide an "oscillator whistle" in a nearby AM radio.

This is the circuit. 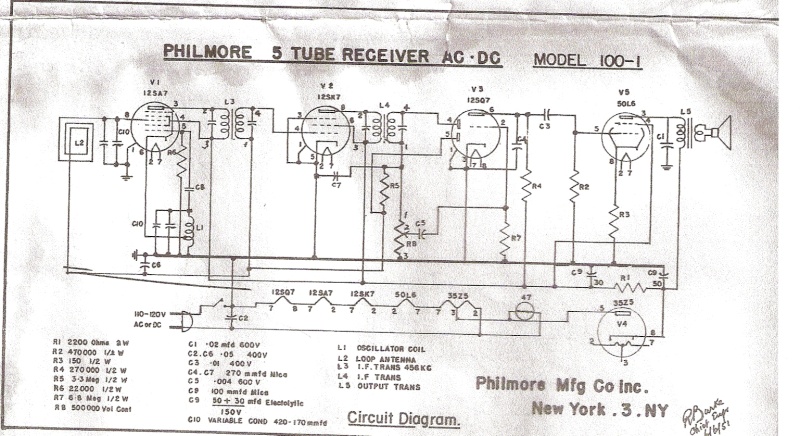 It is almost exactly like the AA5 circuit in an Olympic 6-501, with the main difference being the circuitry on pin 5 of the 12SQ7, and slight value differences for the resistor and cap in the oscillator circuit. Here is that print. 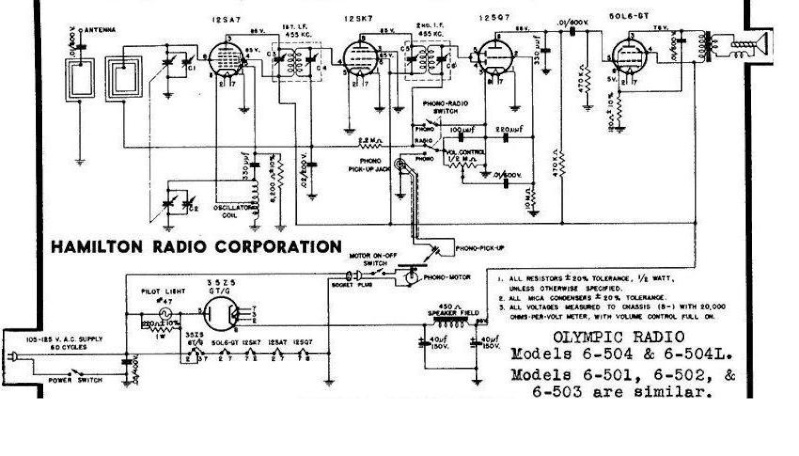 If anyone can ID whatever I am missing to get it running properly, would be appreciated. My other alternative might be to rewire it according to the second print, and see if it would work that way.

May we see some pictures? A schematic, while helpful, isn't enought to go by. We need to see your actual work.
Thanks.
Bill Cahill
_________________
Please also join us here; www.videokarma.org/index.php 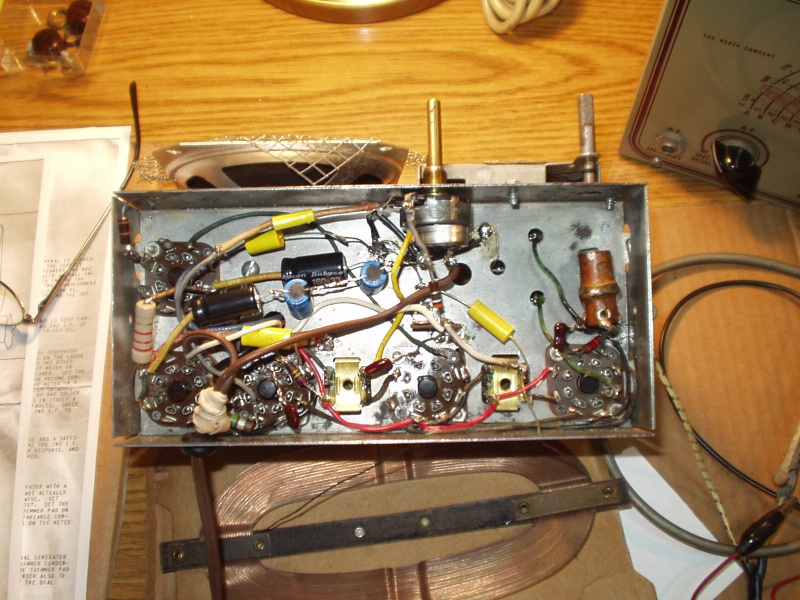 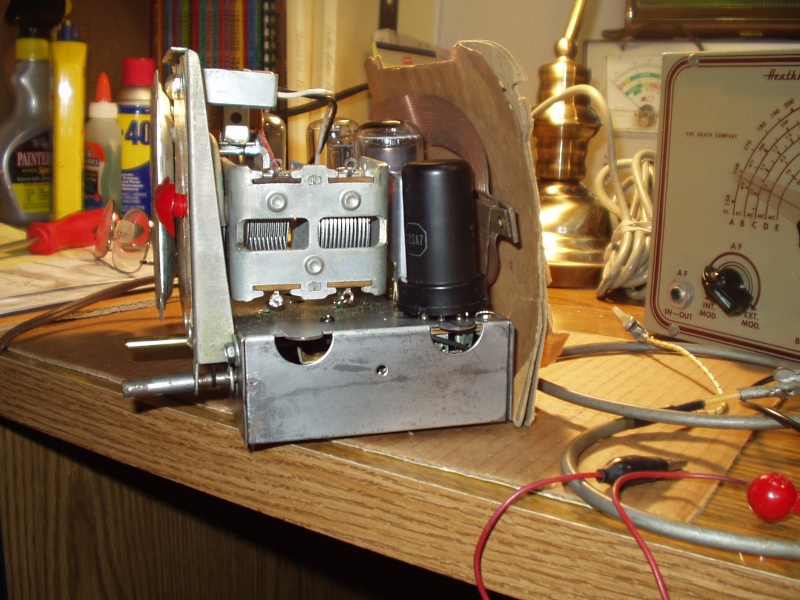 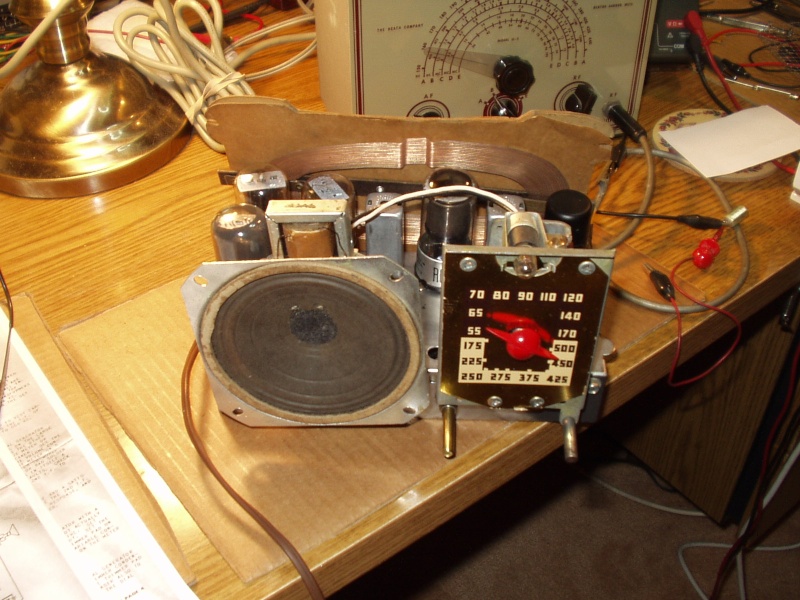 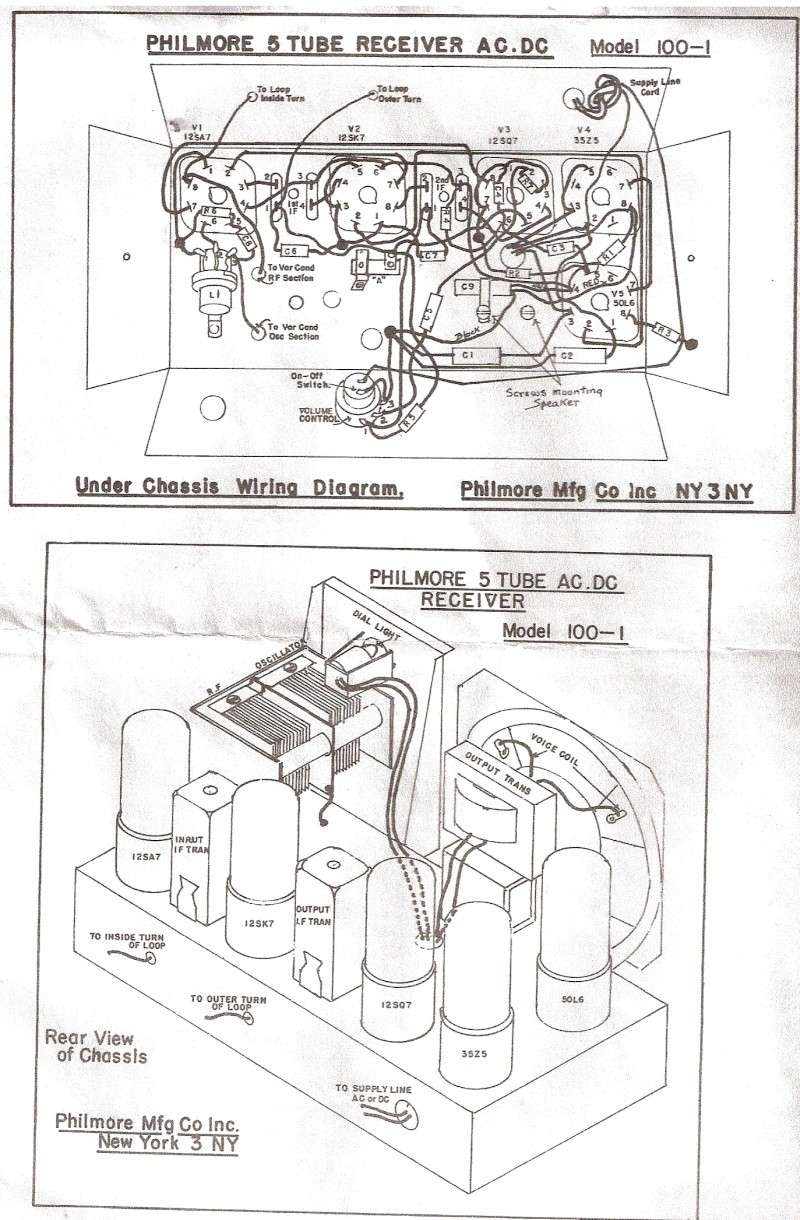 What do the words "silver migration" mean to you??
An easy test. On each of the secondaries, one at a time, ofcourse, put your dc meter with red positive wire going
from grid, or, diode connections , and, black negative wire going to B-.
See if you get a positive boltage. If you do, this means that the built in mica capacitors in the I F trasnsformers have had the pop rivet that holds the capacitor assembly in the bottom together has spread corosion to the two caps causingleakage, thus, killing your reception.
Bill Cahill
_________________
Please also join us here; www.videokarma.org/index.php

I measured from pin 4 of each IF (the first going to the 12SK7 grid, the second to the 12SQ7 diode) to chassis ground (B-), and there was no DC voltage.

For one, why do you have all those electrolytics in series?
Your wirring on second IF, detector looks like it needs neatenning up.
Check to make sure you don't have the transformers reverse wired.
Check for voltage on volume control hot terminal. If you get any positive voltage, then, the problem is something in, or, around the second IF transformer.
Ave you sure you have oscilator coil wired correctly?
Looks like the wirring may need a little neatenning up. Radios are somewhat crittical in some circuits.
Bill Cahill
_________________
Please also join us here; www.videokarma.org/index.php

The IF's are not reverse wired. Pin 4 on each is marked with green, to ID the coils pin layout. I have checked the wiring of the entire circuit numerous times.

Regarding the volume control, there is no voltage on the center, and -.3 volts on the high side.

Regarding the oscillator coil, resistance reading from the CT to the grounded lug =.7 ohms. To the high lug, 3.8 ohms. High lug to grounded lug, 4.5 ohms.

AFA the wiring, I tried to make every lead as short as possible. I've repaired a number of AA5's, but this little guy has me stumped. I appreciate your help.

First, putting the electrolytics in series doesn't increase capacitance, It decreases it. To get more capacitance, you need to put them in parallel. Positive to positive, and, negative to negative.
That doubles it. What you actually did was increase the voltage capability, but, decrease the capacitance.

I'd start off by checking your voltages in oscilator circuit.Your oscilator may not be operating.
Another thing. Do you have a signal generator? If so, try applying a signal near your antenna, and, tune the tuner of radio to that frequency. If you get a strong signal, your oscilator is working. If not, it may not be working.
Bill Cahill
_________________
Please also join us here; www.videokarma.org/index.php

I got the radio working.

I had accidentally connected the antenna loop lead intended for pin 8 of the 12SA7, to pin one, grounding it, and apparently kept missing it when I repeatedly went over the wiring. Your suggestion to verify the oscillator voltage caused me to identify what I had been missing, so this is the second radio you have bailed me out on!

Also, I changed the 'Lytics in the 50 mfd circuit to parallel wiring, as you also suggested, but it has increased the plate voltages;

Is the 50L6 supposed to run with that voltage? I noticed that the audio is somewhat garbled at various positions of the volume control, as if it were overloaded.

Your B+ resistors may be a tad low.
Voltages don't sound very un-real, though. May be mis alignment.
Higher voltages will change that.
Bill Cahill
No problem. I like helping to resurect.
_________________
Please also join us here; www.videokarma.org/index.php

I assume you mean R1, 2200 ohms. What value would you suggest as a substitution? And given that the other plate voltages are all about correct, as compared to similar circuits, would you regardless suggest changing R4, 270K?

L5's in-circuit resistance is 151 ohms; does that sound about correct?

I've now got the radio working well, except for one problem;

at low volume, the audio is distorted, but becomes clear when the volume control is advanced, to a level louder than I would normally listen.

I changed R7 from 6.8 megs to 10 megohms, and R4 from 270K to 470K, on the assumption that putting more resistance between ground and the volume control's wiper, and also the plate of the 12SQ7 might help, and it seemed to improve things slightly, but not completely.

I also tried different tubes for both the 12SQ7 and 50L6, but there was no improvement.

Any suggestions would be appreciated.